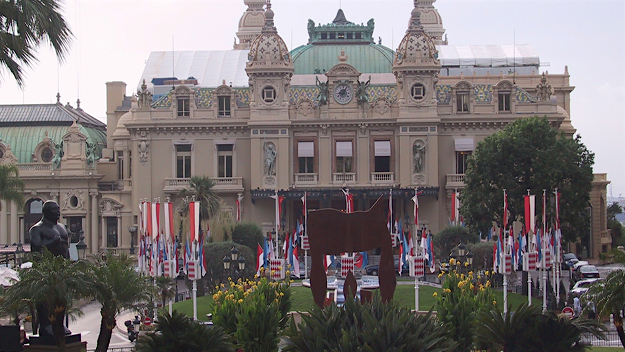 With a rich history stretching back nearly 200 years, modern casino gambling has entertained countless numbers of people, with more than a few who became wealthy overnight. But it's the most exclusive casinos, romanticized in film and literature with images of high stakes gambling tables surrounded by a select group of guests in tuxedos or evening dresses, which have intrigued people around the world and even those who don't enjoying gambling. Although some of the most lavish casinos in the world are part of a private, members-only club, many others are open to the public who are all but certain to be bedazzled with the ultimate experience in casino gaming. The following are seven of the most lavish and most beautiful casinos around the world.

Known for its rich history, exquisite decor and a rich and famous clientele, the Casino de Monte Carlo in Monaco is likely the world's most famous casino. First opened in 1863, this extraordinary Beaux Arts structure was designed by the famed French architect Charles Garnier, who also created his namesake Palais Garnier in Paris, one of the world's most renowned opera houses. The enormous gambling and entertainment complex overlooking the Mediterranean Sea also features the Monte Carlo Opera House, the offices for the Monte Carlo Ballet and is next door to the palatial five-star luxury Hotel de Paris Monte Carlo, with the Michelin three-starred restaurant Louis XV led by acclaimed chef Alain Ducasse. With the breathtaking interior of the casino, a variety of traditional games can be enjoyed including roulette, poker, blackjack, craps and baccarat, as well as video poker and slot machines. The Casino de Monte Carlo has often been portrayed as a favorite haunt of fictional British super spy James Bond in films like "Never Say Never Again" and "GoldenEye" and also served as the inspiration for Ian Fleming's first James Bond novel and two subsequent films, "Casino Royale." The Monte Carlo casino has also appeared in several other popular movies, such as "Cars 2," "Iron Man 2," "Oceans 12" and "Grace of Monaco."

It's difficult to single out just one lavish Las Vegas casino-hotel, and it might be best to end the debate with the simple flip of a coin. But among the many five-star luxury resort-casinos in the city, Aria often comes up in the conversation as the best in this famous gambling mecca in the desert. Located in the urban metropolis known as City Center on the Las Vegas Strip, Aria hosts an extraordinary casino with more than 150,000 square feet of gaming space and features nearly 2,000 slot machines and 145 tables for popular casino games like roulette, craps, blackjack and poker. Also on the casino floor is a 25-table poker room including a high stakes table in the Ivey Room with wagers up to $100,000. With more than 4,000 technologically advanced guest rooms, a major retail and entertainment complex, more than 25 restaurants and bars and three swimming pools, Aria is reportedly the largest building in the world with an LEED Gold certification by the U.S. Green Building Council. Among the exceptional dining experiences within Aria are chef Michael Mina's Bardot Brasserie, Sage led by James Beard Award-winning chef Shawn McClain and chef Masa Takayama's BarMasa.

Featuring more than 800 of the newest slot machines and over 75 table games including blackjack, craps and roulette, Atlantis Casino is the largest casino in the Caribbean. Situated in 50,000 square feet within the enormous luxury resort Atlantis Paradise Island, the state-of-the-art casino spans a significant portion of the seven-acre Paradise Lagoon and connects the resort's signature hotel, the Royal Towers, to the smaller Coral Towers, the conference center and Atlantis Marina. The main casino, graced with the stunning Crystal Gate and an array of colorful glass sculptures, is open 24 hours a day and also offers the Pegasus Race and Sportsbook, with five betting windows, wagering on all major sporting events and live simulcasts from U.S. racetracks. Adjacent to the casino is Dragons Nightclub for hand crafted cocktails, dancing and music provided by live bands or DJs. Atlantis Paradise Island Resort offers six hotels with more than 4,000 rooms, including some of the world's most expensive suites. Also on the property is one of the world's largest marine habitats, 40 restaurants and lounges, an 18-hole championship golf course and a 63-acre water park.

Located in southwestern Germany near the French border, Casino Baden-Baden is the oldest casino in Germany and one of the most famous in Europe. First opened more than 150 years ago, the casino is part of the fabulous luxury hotel and spa Kurhaus, whose stunning Belle Epoch architecture was inspired by ornate French palaces. Once described by famed German actress Marlene Dietrich as "the most beautiful casino in the world," the casino offers an impressive assortment of classic gaming action, such as roulette, poker and blackjack, in addition to more than 140 slot machines with payouts averaging between 92 and 97 percent. Also within the historic casino is a opulent conservatory with hand-painted stained glass windows, a table room awash in red with a priceless chandelier known as The Red Hall, a luxury restaurant currently being remodeled and the contemporary nightclub Bernstein. The city of Baden-Baden also hosts several charming hotels, a museum with 2,000-year-old Roman bath ruins and the Iffezheim racetrack, the setting for some of the most prestigious horse races in Europe.

The ultimate gaming destination in Singapore, Marina Bay Sands is the world's most expensive standalone casino property and features the world's largest atrium casino. The magnificent three-level casino covers more than 160,000 square feet and offers more than 2,300 slot machines and 350 gaming tables. More than 20 games can be played at the very popular casino, including familiar games like blackjack, baccarat and roulette, as well as other less familiar such as Sic-bo, a game of chance with three dice that originated in China and Pontoon, the traditional British version of blackjack. The resort resembling the Roman numeral "III" holds more than 2,500 rooms and suites, an array of dining options and an 800,000-square-foot shopping complex. However, its signature attraction is the spectacular Sands Sky Park, described as a "1.2-hectare tropical oasis" that sits atop the three towers to form one of the world's largest cantilevers. At 200 meters high (656 feet), the resort's majestic skypark is said to be longer than the Eiffel Tower is tall and features a breathtaking 150-meter (164 yards) Infinity swimming pool with unparalleled views of the Singapore skyline.

Tucked away in the basement of one of London's most iconic hotels bordering the fashionable Mayfair and St. James districts, the Ritz Club is one of the world's most exclusive private member clubs. Occupying the space that housed the original Ritz ballroom, the club first opened in 1978 and dramatically restored the Louis XVI style of the Ritz Hotel, but didn't offer casino gambling for another 20 years. Today, the Ritz Club has four distinct areas: the renowned restaurant, bar with a smoking terrace, the Salon Privé lounge and the principal gaming salon. Open 24 hours a day, seven days a week, the casino offers a variety of classic games like American roulette, blackjack, baccarat and three card poker and has three adjoining rooms for baccarat, roulette or blackjack. Most table games have a modest minimum bet of £25, but roulette starts at just £5. First opened in 1906, the Ritz Hotel is often cited as the world's greatest hotel and consistently sets the standard for classic luxury and impeccable service.

The Venetian Macao Resort Hotel looks much like its sister casino on the Las Vegas Strip, with a replica of Venice's St. Mark's Campanile and gondola rides with singing gondoliers. But with 550,000 square feet of casino space, the Venetian Macao boasts the world's largest casino and is also one of the world's largest hotels. In fact, the casino floor of the Venetian Macao is quadruple the gaming space of its equally famous counterpart in Las Vegas. More than 3,400 slot machines and 800 Vegas-style gaming tables are on the Venetian Macao casino floor, in addition to more than 30 restaurants and bars on the entire complex. The Venetian Macao is an all suites hotel with 3,000 rooms, each with a separate bedroom and living area. Similar to the five-star luxury Venetian Las Vegas, the Macao resort also offers shopping at The Grand Canal Shoppes, gondola rides, lavish pools with cabanas and plenty of entertainment at the 1,800-seat theater and the 15,000-seat CotaiArena for world class sporting events and concerts. A gambling oasis whose revenue exceeds Las Vegas' version, Macau is just one of two destinations in China for legalized gambling, with Hong Kong the only other.