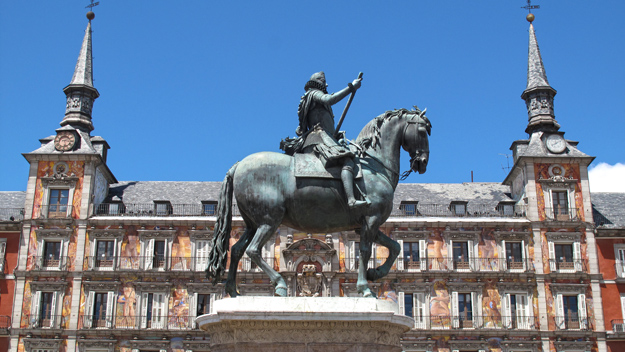 The capital and largest city of Spain, Madrid is one of the world's greatest destinations. With a history that stretches back to the ninth century, the city located in the heart of Spain is home to more than three million people, a wealth of history and a critically important center of entertainment and culture. While Paris, Rome and London gather most of the attention for popular European destinations, Madrid most deservedly belongs in this very select list. You may not need any reason to visit the fascinating city known as El Foro, but here are 10 things that will inspire your future traveling plans.

El Palacio Real de Madrid is the official residence of the King of Spain in Madrid. First occupied in 1764 by Charles III, the palace is only used for state ceremonies, official banquets and other state events. General admission to the palace is 11 Euro and a reduced fare is 6 Euro. Among the highlights of a visit to the Royal Palace include the Royal Armory of Madrid, paintings from illustrious artists such as Caravaggio, Velázquez and Goya and the world's finest collection of Stradivarius stringed instruments. On the outskirts of Madrid is the Palace of Zarzuela, the residence of the former King of Spain, Juan Carlos and Queen Sofia as well as the official residence of the current King Felipe VI and his wife Queen Letizia.

Just a few minutes east of the Royal Palace is Plaza Mayor, the city's main public square. Completed in 1621, the enormous rectangular plaza has been the site for many of the city's most famous public events and is a great spot for people watching, dining and sampling Spanish wine. Surrounding the square is are buildings up to four stories high, with the most prominent section known as the Casa de la Panadería (bakery house), just footsteps from the statue of King Felipe III. Not far from Plaza Mayor is another world famous public square – Puerta del Sol, the site of the city's annual New Year's Eve celebration and enormous public demonstrations.

For many visitors to Madrid, Reina Sofia Museum may be the first attraction to see. That's because Spain's national museum of 20th century art houses arguably the most treasured work of art in the city. Since 1992, Reina Sofia has been the permanent home of Picasso's stirring 1937 masterwork "Guernica," created in reaction to the infamous Nazi bombings of the Basque town of Guernica in northern Spain during the Spanish Civil War. Other esteemed artists whose works of art are featured at Reina Sofia include Juan Gris, Joan Miró, Max Ernst and Salvador Dali. Along with the Prado Museum and the equally important Thyssen-Bornemisza Museum, the three national museums form the Paseo del Arte, otherwise known as the Art Triangle. Among the permanent collections from the Thyssen-Bornemisza Museum are Van Gogh's "View of Vessenots, Auvers," Picasso's "Harlequin with a Mirror" and Cézanne's "Portrait of a Farmer."

The Prado is one of the world's most prestigious museums and the most important in Spain. Established in 1819 by King Ferdinand VII, the Spanish national museum houses the world's largest collection of art from Diego Velázquez, Francisco Goya and Peter Paul Rubens, in addition to other prominent artists such as El Greco, Jose Ribera, Raphael and Rembrandt. Highlights include Goya's "La Maja Vestida," Hieronymus Bosch's "Garden of Earthly Delights" and Velázquez's most famous work of art - "Las Meninas" (maids of honor) described as the "Mona Lisa of the Prado." The celebrated museum is located in central Madrid, near Buen Retiro Park and Palacio de Cristal.

Visitors to Madrid can enjoy all sorts of delicious traditional foods from an enormous range of outstanding restaurants and tapas bars. Recommended dishes include chocolate churros, Cocido madrileño (chickpea-based stew), bocadillo de calamares (fried calamari sandwich) and paella, the national dish of Spain. Madrid is home to the world's oldest restaurant – El Sobrino de Botín, best known for its specialty dishes of cochinillo asado (roast suckling pig) and sopa de ajo (poached egg in chicken broth and garlic). For the ultimate experience in fine dining in Madrid, the choice is DiverXO, the only three-starred Michelin restaurant in the city whose executive chef David Muñoz also leads Sublimotion, the world's most expensive restaurant, located at the Hard Rock Hotel Ibiza.

La Gran Via is the most famous street in Madrid and the primary center for shopping, entertainment and nightlife. Considered Madrid's version of New York's Broadway, Gran Via is home to Madrid's lively theater scene, which includes major opera houses like Teatro Compac Gran Via and Teatro Lara. La Gran Via is also well known for its stunning architectural styles ranging from Art Deco and Beaux Arts to Romanesque and Art Nouveau. Of particular interest are the Edificio Metropolis (the Metropolis Building) regarded as a iconic symbol of the city and Edificio Telefonica, Europe's first skyscraper.

Said to have more bars per capita than any other city in Europe, Madrid has an exciting and thriving nightlife. From world class nightclubs to flamenco shows, Madrid is often known as a city that never sleeps. Flamenco shows can be seen all across the city and some notable tablaos ( flamenco clubs) are Casa Patas, Corral de la Pacheca, Cardamomo and Corral de la Mereiría, acclaimed as the most world's most famous flamenco venue. For those who enjoy dancing and partying until dawn, nightclubs worth a visit are Joy Eslava, Teatro Kapital and the world famous Club Pacha.

The Catedral de la Almudena is the principle church of the Roman Catholic Archdiocese of Madrid. Finally completed in 1993, the cathedral is not among the oldest in the city but is believed to be located on the site of the first mosque in the city. The oldest church in Madrid is the Church of San Nicolás, completed in the 12th century. Another religious structure of importance for visitors is the Temple of Debod, a second century Egyptian temple rebuilt in Madrid.

Soccers fan know that Madrid is home to the world's most valuable sports team – Real Madrid. The most successful soccer club in the country, Real Madrid has won 80 titles, including 17 European championships. Many of the world's most famous soccer players were once members of the team, such as David Beckham, Kaká and Ronaldo, along with current members Sergio Ramos and Cristiano Ronaldo, often regarded as the world's best soccer player. Real Madrid plays its home games at Santiago Bernabéu Stadium, located in the Chamartin district of Madrid.

One of the great and most enduring traditions of Spain is bullfighting. Although a visit to a bullriding is certainly not for everybody, the highly controversial sport remains one of the most popular forms of entertainment in the country. The bullfighting season typically begins in late March and runs into late October, with the best event, the San Isidro Festival, held from May to mid-June. Established in 1931, Madrid's La Plaza de Toros de las Ventas is the most famous bullring in the world.