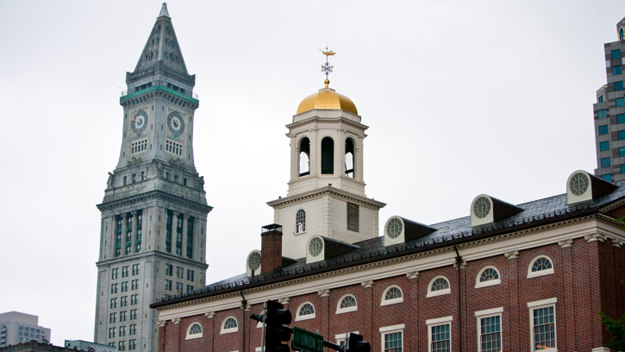 The National Park Service will observe its 100th anniversary this year and everyone is invited to celebrate. One of this year's most popular destinations to mark this momentous occasion is expected to be New England, particularly in and around the city of Boston. While there are a number of Revolutionary War sites spread across New England, such as Fort Griswold in Connecticut and Fort George in Maine, the most significant attractions are located in the city often referred to as the Cradle of the American Revolution. If you're thinking of visiting the Boston area, here is a brief guide to a few of the city's most important national parks and other historical attractions that helped contribute to the birth of a nation.

Just steps from the Old State House lies a circle of cobblestones to commemorate one of the earliest events leading to the Revolutionary War. On March 5, 1770, tensions were high as civilians clashed with British soldiers as a result of the occupation of Boston, which began in October 1768. In an effort to quell the disturbance, the British troops fired upon the mob, resulting in the deaths of five civilians and injuries to six others. Among those killed was Crispus Attucks, who is widely considered the first casualty of the American Revolution. Months later, eight British soldiers were put on trial for murder, but six were eventually acquitted while just two were found guilty of manslaughter. Ironically, the British soldiers were defended by a young Boston lawyer named John Adams, who went on to become the second President of the United States in 1797.

As part of the ongoing protest of the Tea Act of 1773, a group of colonists known as the Sons of Liberty boarded three British ships and tossed hundreds of chests of tea into Boston Harbor. That act of defiance to the British Parliament's "taxation without representation" on December 16, 1773 became known as the Boston Tea Party. Outraged by the continued destruction of property, the British Parliament responded by enacting the Coercive Acts in March 1774. Six months later, the First Continental Congress was formed in Philadelphia in response to the passage of the Coercive Acts. The following year, the first shots were fired at British troops outside of Boston, signaling the beginning of the Revolutionary War. Today, replicas of two of the Boston Tea Party ships are on display as part of a floating museum named the best family attraction in Boston. The Boston Tea Party Ships and Museum also features one of the two known tea chests from the Boston Tea Party.

Encompassing nearly 975 acres, Minute Man National Historical Park preserves the sites of the first battles of the Revolutionary War, collectively known as the Battles of Lexington and Concord. The initial clash between colonists and British troops was precipitated by Paul Revere's legendary midnight ride on April 18, 1775 that alerted the colonial militia that "the regulars are coming." The following day, on April 19, 1777, militia fired the first shots at British troops on the Old North Bridge, which was immortalized by Ralph Waldo Emerson's "Concord Hymn" with the famous line "the shot heard round the world." A replica of the Old North Bridge rests on the original location of the event and is part of the national historical park. Among other notable points of interest within the federally protected area are the Minute Man statue, the restored Hartwell Tavern and the Paul Revere Capture Site, the spot where Paul Revere ended his midnight ride. Not widely known is that Revere did not ride alone during this important moment in history. Instead, he was accompanied by two other men, William Dawes and Dr. Samuel Prescott, but they were halted by a patrol of British soldiers. The trio attempted to elude the troops and only Revere was briefly held at the capture site. Dr. Prescott was the only colonial to reach Concord and deliver the message that the British were coming.

Established in 1951, the Freedom Trail connects 16 of the most historical landmarks within Boston. The trail extends 2.5 miles, from the Bunker Hill Monument in the city's oldest neighborhood of Charleston to the Boston Commons, the oldest city park in the country. Of particular interest on the trail marked by red or painted bricks are seven of the eight sites that comprise Boston Historical National Park (more on that below). Among the 16 sites are the Old Granary Burial Ground, the final resting place for several prominent figures from the Revolutionary War era including Paul Revere and three signers of the Declaration of Independence: Samuel Adams, John Hancock and Robert Treat Paine. Other notable sites include the historic marketplace Faneuil Hall and the USS Constitution, best known as a warship during the War of 1812. At the northeastern corner of Boston Commons, the Freedom Trail intersects with the acclaimed Black Heritage Trail, which features the historic African Meeting House and the Robert Gould Shaw and 54th Regiment Memorial, further immortalized in the 1989 Civil War film "Glory."

As the most important segment of the Freedom Trail, the Boston National Historical Park is an association of prominent Revolutionary War sites that were collectively designated as a single national park in 1974. Each of the eight sites are National Historic Landmarks and include such famous places as the Old North Church, the Old State House and the Paul Revere House. The northernmost point of the Freedom Trail is Bunker Hill Monument, which commemorates the first major battle between British troops and the colonists and is perhaps best known for the famous order "don't fire until you see the whites of their eyes."  Built in 1723, the Old North Church is the oldest surviving church in Boston and is forever known as the location of the two lanterns that were described as "one, if by land, two, if by sea" in Henry Longfellow's poem "Paul Revere's Ride."

Related: Boston Travel Guide
Randy Yagi is an award-winning freelance writer covering all things San Francisco. In 2012, he received a Media Fellowship from Stanford University. His work can be found on Examiner.com