"We have enough evidence from the depositions that we've done to warrant bringing this forward, evidence of an extortion scheme, using taxpayer dollars to ask a foreign government to investigate the president's opponent," Swalwell said on "Face the Nation" Sunday.

The recent efforts by Swalwell and other House Democrats to portray the allegations as "extortion" is a shift from their emphasis on a "quid pro quo" as the public phase of their inquiry approaches.

White House acting chief of staff Mick Mulvaney has conceded that there was some level of a quid pro quo arrangement, but with the objective of pursuing an anti-corruption investigation in Ukraine — not one designed specifically to damage former Vice President Joe Biden. Some of the president's Republican allies in Congress have also maintained that quid pro quo deals are an integral and ordinary part of international diplomacy.

Extortion, on the other hand, entails a person or party forcing someone to do something through coercion and threats. The term is also more widely understood than quid pro quo, a Latin phrase meaning "this for that." 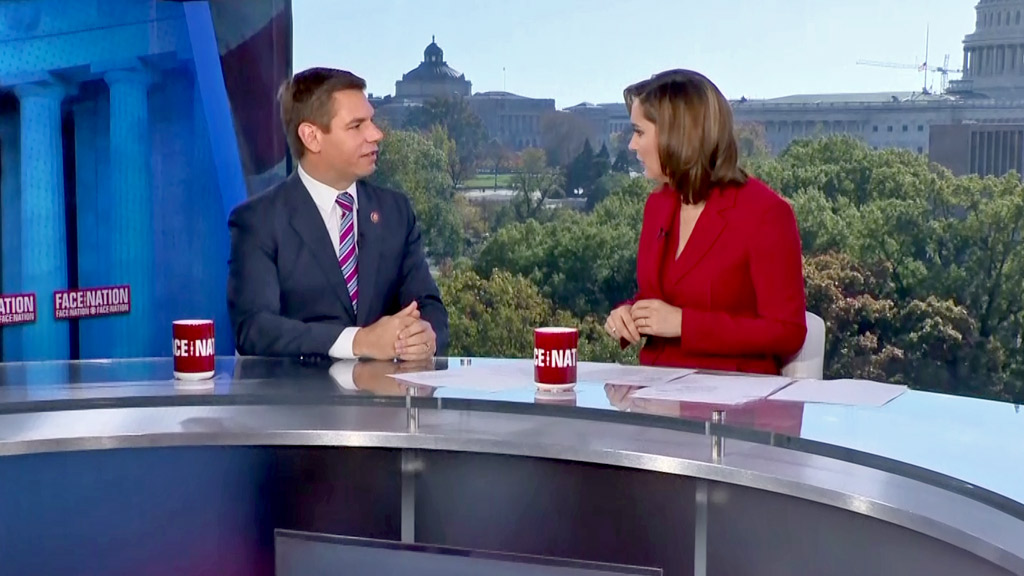 MARGARET BRENNAN: The question is, of course, with our next guest, the assumption, Democratic Congressman Eric Swalwell joins us now, is that when it goes from your committee, from these hearings were about to begin before House intelligence that there will be articles of impeachment voted on that will pass the Democratic controlled House and then end up in the other side of the court in front of Senator Kennedy there. There will be 13 Democrats, nine Republicans who get to ask questions in this next round of three diplomats in the coming days. What is going to be different about this? I mean yeah, cameras are in the room, but is this just show?

REPRESENTATIVE ERIC SWALWELL: Good morning, MARGARET. It's important that the president has due process and evidence is not a conclusion. We have enough evidence from the depositions that we've done to warrant bringing this forward, evidence of an extortion scheme, using taxpayer dollars to ask a foreign government to investigate the president's opponent. But it's important that these witnesses raise their right hands and take questions from both Republicans and Democrats. The president is going to get that. It's important that the Republicans be afforded the opportunity to suggest witnesses that we should call and that we determine whether that is relevant, that-that, you know, the facts are just as important -- as the process behind the facts as far as what, if anything, goes over to the Senate.

MARGARET BRENNAN: But do you expect anything new from these testimonies or is it going to be a recitation of what we can read in these depositions already?

REP. SWALWELL: These witnesses have been fairly consistent. And for the most part, they've not been coordinating or talking to each other. But again, this is America. And we don't just have, you know, railroading of justice. These witnesses, you know, should come public and you know the American people should judge for themselves, as well as we will, as to what happened here.

MARGARET BRENNAN: Well, on the issue of witnesses that Senator Kennedy was talking about, the- the Republican Party put forward yesterday a list of suggested witnesses they would like to see called. On there Hunter Biden and his business partner. Is it safe to say they will never come before the House Intelligence Committee?

REP. SWALWELL: Well, as Chairman Schiff has said we're not going to go back in time and revisit conspiracy theories that are implicated in the president's call. And you know, it was said- former Secretary of Homeland Security Tom Bossert, who told Jake Tapper a couple of weeks ago that he was telling the president that much of what the president alleged in that phone call to President Zelensky about the Ukrainians involved in 2016 was just nonsense. And so we don't want to revisit conspiracy theories. If people have relevant information to this investigation and the president's conduct, of course, we want to hear from them.

MARGARET BRENNAN: So that's no to the Bidens?

REP. SWALWELL: I'll leave that to the chairman.

REP. SWALWELL: I don't see any relevancy with the Bidens. There's no evidence that any- anything improper has happened and witnesses have been asked about the Bidens and said that Vice President Biden in every way, these witnesses, in the way they worked with him, conducted himself with integrity.

MARGARET BRENNAN: One member of the National Security Council, Tim Morrison, was on the Republican list. Kurt Volker, the former U.S. envoy to Ukraine. Is it safe to assume they will be before your committee?

REP. SWALWELL: You know, we're going to handle that this week. You know, taking up the Republican witness list and we're going to be fair about it, because, again the fairness behind the process is just as important as the facts.

MARGARET BRENNAN: You wrote- talking about the fairness of the process, one of the things that gets criticized by Republicans of Democrats is that the outcome's presupposed.

MARGARET BRENNAN: And if you just look back at your own record--

MARGARET BRENNAN: So how can that look fair?

MARGARET BRENNAN: How can that be fair?

REP. SWALWELL: You know what's interesting about the op-ed I wrote, I wrote it in response to the president's interview with George Stephanopoulos, where he said if he was offered again dirt on a political opponent from a foreign power, he would again take it. I didn't know when I wrote that op-ed that he was already engaging in this manner with the Ukrainians. But his prior conduct with the Russians suggested that he might do that, which is why I thought at that time we have an upcoming election. We want it to be pure and one that is above, you know, any questions. And this president, you know, needs to be held accountable for his actions.

MARGARET BRENNAN: Former National Security Adviser John Bolton, he has not been subpoenaed. He's deferring to a court to sort of decide who he needs to listen to. The- the White House tells him not to comply or Congress who has asked him to come and answer questions. Why don't you think you need to hear from him? Why can't you wait until December until a court would decide?

REP. SWALWELL: We'd like to hear from him, but we've heard from three of his deputies who've provided consistent testimony about what was going on in this shakedown scheme. We've asked him to come in, but the White House has told him not to come in. And we're not going to chase witnesses to the courts, because even if a court ruled in December that he has to come in it would be- it will be appealed to a circuit court of appeals and then ultimately up to the Supreme Court. We don't have time with an upcoming election that potentially could be compromised by the president's conduct. We need to, you know, move expeditiously but fairly on what we have now.

MARGARET BRENNAN: But why expeditiously? Why can't you just wait a few weeks?

REP. SWALWELL: Well, it's not a few weeks. It could be all the way up to a year. And we see this as a tactic by the administration to obstruct our investigation. We also believe if the president believed that John Bolton or Mick Mulvaney could offer testimony that would show that he's innocent, he would send them in on horses to our committee to testify. They can't. Which is the reason we believe he's obstructing, which goes to a consciousness of guilt.

MARGARET BRENNAN: The House Republicans have sort of reshuffled their deck ahead of these hearings and added Congressman Jim Jordan to the committee. And I'm wondering what you think that will do to these public hearings this week. I mean, what will this change?

REP. SWALWELL: You know, they- they could put Johnnie Cochran on their side to ask questions. It's not going to change the facts of this case. Now, if there are going to be stunts, you're going to see again, those stunts will be used by the American people against them to show a consciousness of guilt and a lack of seriousness. I think this is a very serious investigation. This is an opportunity for my Republican colleagues to reset and recognize, also, they're not the public defenders for the president. They don't have to defend him at all costs. They can actually approach this objectively, give him a fair process, ask the right questions and then make a judgment on the facts. But this is not a time for stunts.

MARGARET BRENNAN: I want to ask you, you had been a presidential race contender for 2020. We saw Michael Bloomberg say he may jump into the race, isn't officially declared. What do you think that does to the lineup?

REP. SWALWELL: It gives the voters more options. But look, I- I think options are good and whoever emerges from this will be battle tested. It's going to flush out weaknesses, this large field, and whoever emerges is going to be a very strong candidate to take on and defeat Donald Trump if he's their nominee next year.

MARGARET BRENNAN: All right. Thank you very much.

MARGARET BRENNAN: We'll be back in one minute with the new national security adviser to President Trump, the master, Robert O'Brien. Stay with us. It's just ahead.