MONETA, Va. (CBS SF) -- A gunman shot and killed a TV reporter and cameraman during a live news broadcast in Virginia Wednesday, recording the killings on his own camera and later posting the video on social media as police closed in on him.

The gunman, identified as 41-year-old Vester Flanagan of Roanoke, shot himself after a brief car chase and died later at the hospital, according to the Franklin County sheriff.

Flanagan, who went by his on-air name Bryce Williams, was described as a disgruntled former employee who had been fired from WDBJ in 2013. Flanagan went to high school in Oakland and worked at KPIX-TV from 1993-1995.

Flanagan posted comments from what his now-suspended Bryce Williams Twitter account, including a video of the shooting from a first-person perspective. The video was also posted to his now-suspended Facebook page.

The video shows the point of view of the gunman walking up to the news crew, WDBJ reporter Alison Parker and cameraman Adam Ward, as they interviewed an economic development official around about tourism on Bridgewater Plaza in Franklin County.

None of them appeared to be aware of his presence and at one point, the shooter raises his handgun into the video frame points it at Parker and then brings it down. The live interview continues and when Ward points the camera back at Parker the gunman raises his gun again and opens fire directly at Parker. Eight shots are fired as screams are heard, and the camera goes to black as audio of at least seven more shots are heard.

As seen during the live news report on WDBJ, Parker was smiling when the shots ring out. Parker screams, runs and can be heard saying, "Oh my God."

As the camera drops to the ground, it captures what appears to be a fleeting image of the shooter. The person was wearing black pants and a blue top and appears to be holding a handgun.

The local official being interviewed, Vicki Gardner, was shot and wounded and was in stable condition after surgery.

One of the tweets on the account of Bryce Williams claimed a report was filed with the U.S. Equal Employment Opportunity Commission against Parker, over "racist comments." Other tweets said Ward, went to the station's human resources office "after working with me one time."

ABC News reported that a man claiming to be Williams called the network, saying he had just shot two people, and was faxing them a 23-page document.

In the document, he said he committed murders in reaction to the racism of the church shooting at the Emanuel AME Church in Charleston, South Carolina, that left nine black parishioners dead, as well as seeking seeking revenge for racial discrimination, sexual harassment and workplace bullying he said he suffered as a gay black man.

"This gentleman was disturbed at the way things had turned out at some point in his life. Things were spiraling out of control," said Franklin County Sheriff W.Q. "Bill" Overton Jr.

The shooting happened around 6:45 a.m. at Bridgewater Plaza in Franklin County, as Parker interviewed Gardner about the upcoming 50th anniversary festivities for Smith Mountain Lake, a local tourism destination.

What appears to be his LinkedIn profile suggests a long career in broadcasting and media, including jobs as an intern, production assistant and writer at KPIX in San Francisco from 1993-1995.

Flanagan also lists his educational background as a member of the San Francisco State University Broadcasting program. An SFSU spokesman told KCBS Radio Wednesday a student by the name of Vester Flanagan received a degree in Radio and Television from the university in 1995. 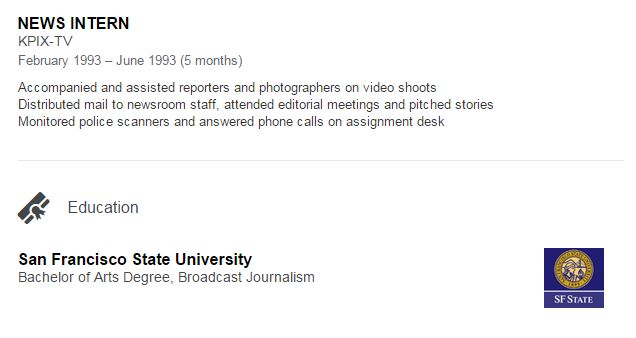 WDBJ General Manager Jeffrey Marks said Flanagan was hired as a reporter at the station and developed a reputation of being difficult to work with.

"Eventually, after many incidents of his anger coming to the fore, we dismissed him. He did not take that well," Marks said on air during his station's coverage of the shooting.

Marks also said that police had to escort Flanagan from the building after he was fired.
Flanagan alleged other WDBJ employees had made racist comments to him, which prompted him to file a complaint, Marks said, but the allegations couldn't be corroborated and his claim was dimissed.

In 2000, Flanagan sued WTWC-TV over allegations of race discrimination following his dismissal from that station. WTWC denied the allegations and said Flanagan was fired over poor performance, misbehavior with regard to co-workers, use of profanity, refusal to follow directions, and budgetary reasons.

Former KPIX-TV anchor Barbara Rodgers issued the following statement about her recollection of Flanagan's days working at KPIX between 1993 and 1995:

I worked with Vester when I anchored the weekend news in the early 90s, but I don't remember much about him. It was mainly because of his unusual name that I remembered him at all. I feel so sad about all of this--for the journalists who were killed and for the young man who apparently needed mental health counseling that he did not get. When Vester worked for KPIX, he was just a young, eager kid out of journalism school and like so many other interns and new employees who came through there in my 30 years at KPIX, he just wanted to be on TV and to do a good job. Well, now he is on TV, but in the worst possible way. My condolences to all of the families who are affected by this tragedy.

Wednesday afternoon, the family of Vester Flanagan issued a statement to WDBJ:

It is with heavy hearts and deep sadness that we express our deepest condolenses to the families of Alison Parker and Adam Ward. We are also praying for the recovery of Vicki Gardner. Our thoughts and prayers at this time are with the victims' families and the WBDJ7 NEWS family. Words cannot express the hurt that we feel for the victtims. Our family is asking that the media respect our privacy.