SAN FRANCISCO (KPIX 5) -- It's an open secret in the airline industry: A flawed design in almost all airplanes is putting flight attendants and pilots at risk, and passengers can unknowingly become victims as well.

On July 16, 2018, at 3:43 p.m., Flight 1097 from Washington Dulles bound for Los Angeles made an emergency landing in Kansas City. The pilot told the control tower that there were sick passengers on board.

"People were being hospitalized," said an Alaska Airlines flight attendant. We're calling her Jane to keep her identity a secret and to protect her from feared retaliation.

"My understanding is that the crew felt symptoms of nausea, itching throat. That is what caused the diversion," said Jane.

She said contaminated air leaked into the cabin on that diverted flight and that it wasn't the first time it had happened.

Dozens of co-workers and passengers have recently been sickened by those odors. It is what's known in the industry as a "fume event" and it has happened on different planes in Alaska's newly acquired Virgin America fleet.

The workers have been sharing their experiences among themselves in internal emails, complaining that management isn't taking them seriously. But all are fearful of speaking out.

"Anybody who is trying to communicate about these instances, they have been pulled in by the company and threatened with their jobs," said Jane.

KPIX 5 obtained an audio clip of a recent Alaska Airlines conference call in which employees were warned to keep all discussion of fumes private.

"We have a very strict social media policy," a voice was heard saying on the audio recording. "We will investigate those instances where people do not abide by the policy and the infraction can lead to termination, so please keep that in mind."

ALSO READ: Teacher: I Was Fired Over 'No Zeros' Grading Policy For Kids Who Didn't Do Homework

The Federal Aviation Administration and the airline industry said the so-called fume events are extremely rare, with less than 33 occurring in every one million aircraft departures. But reporting is only required if the airline determines the fume event is linked to an aircraft component problem.

Many times airlines determine it is not, which means that not all crew complaints are reported.

The travelling public is, for the most part, unaware that they could be at risk. One recent lawsuit called it the airlines' "dirty little secret."

"They have known about it for a long time," said aviation attorney Mike Danko, who is a pilot himself. "Most studies suggest that we get about five fume events per day in the U.S."

Danko says toxic cabin air has been a known concern on almost all makes of jet aircraft going back 50 years to the first commercial fleets.

In an email from 11 years ago, a Boeing engineer openly discussed it with co-workers, concluding: "I think we are looking for a tombstone before anyone with any horsepower is going to take interest."

Danko said the source of the contamination is jet engine oil. At extremely high temperatures, all oils used in jet engines give off fumes.

"The fumes contain something called organophosphates. Organophosphates are neurotoxins. Same stuff that is used in nerve gas," explained Danko. 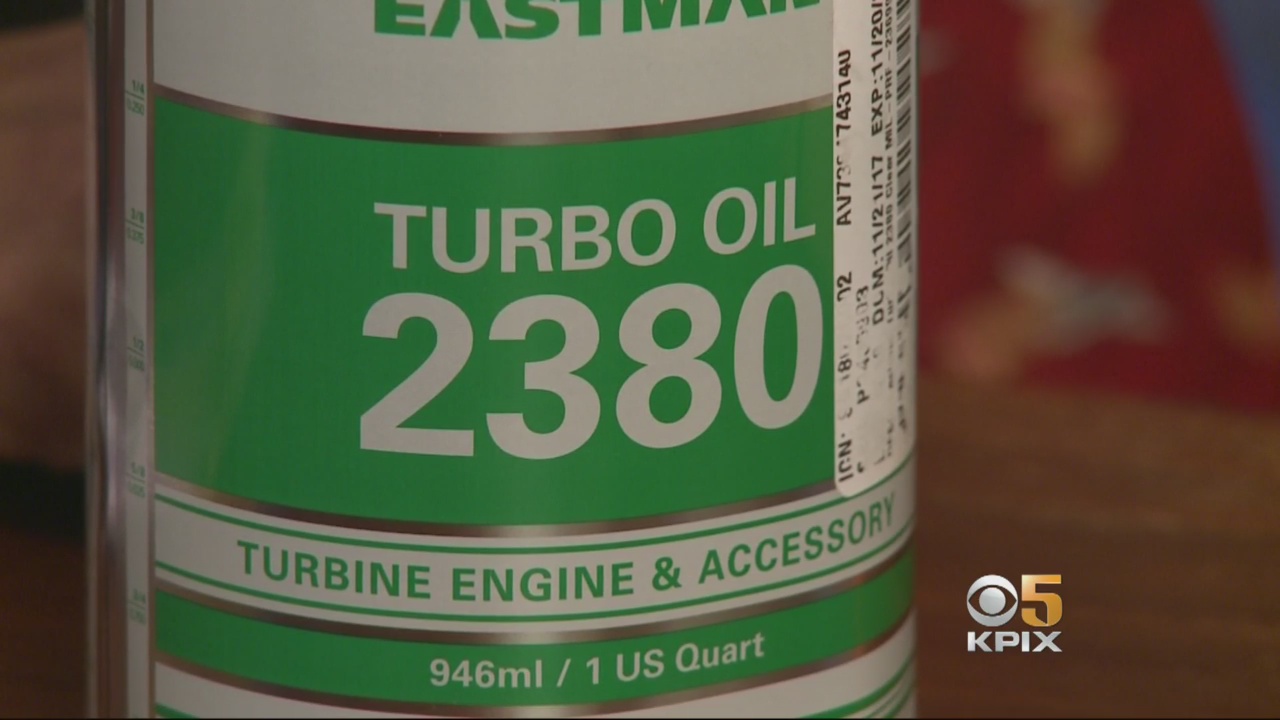 Those fumes can affect crew and passengers. Nearly all commercial jets bleed fresh air in from the engines. That air is then fed through an air conditioner into the plane. If a seal fails, the fumes can be released into the cabin. People exposed to it described it as a "dirty sock smell."

"We have had cases where one pilot was essentially totally incapacitated, and the other pilot although having difficulties managed to land the plane, and that has happened more than a few times, without question," said Danko. 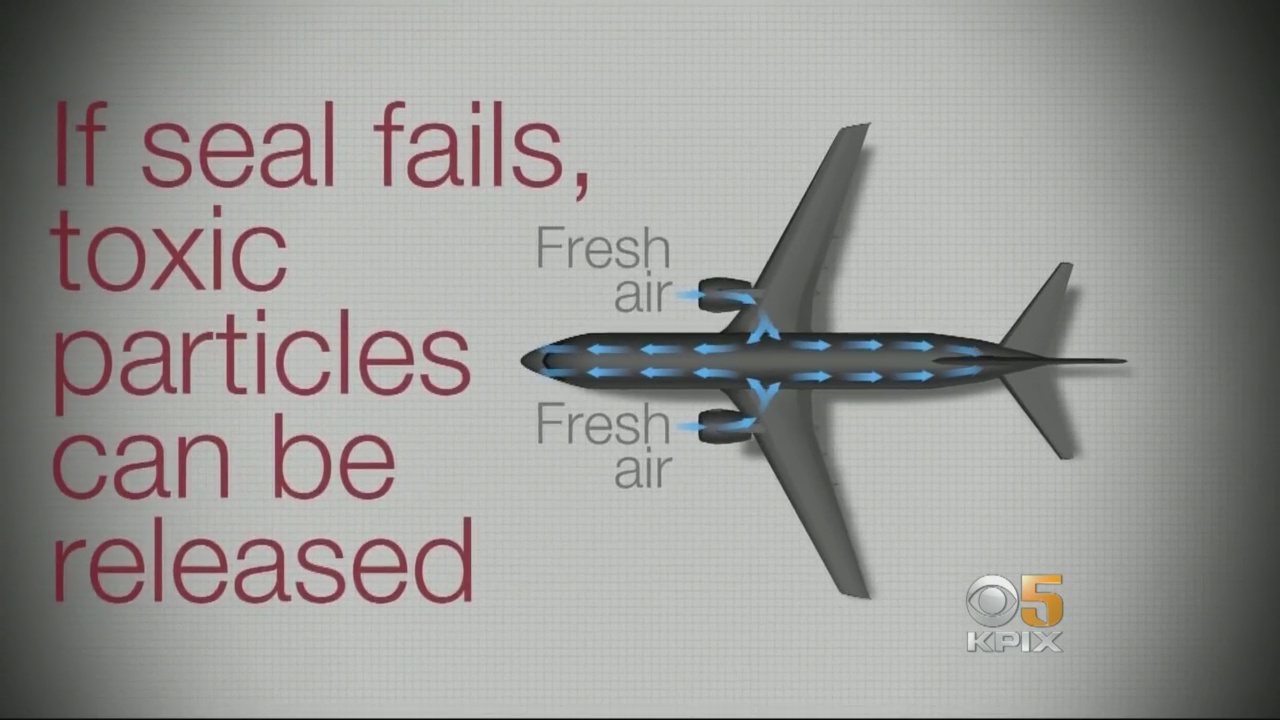 "Over the last two decades I have seen over one hundred patients," said Harrison. "My clinical experience is that these events occur, the exposures are real and the symptoms are connected to the exposure. I don't think flight attendants and pilots are making this up."

And according to an FAA-funded study that Dr. Harrison co-authored, fume events are happening way more frequently than the FAA is reporting.

"We did a large survey of flight attendants, found a pretty high prevalence of symptoms, and uncovered the iceberg, if you will, below the surface. There's a large number of flight attendants who had symptoms but had never reported them," said Dr. Harrison.

As for passengers experiencing the symptoms, Dr. Harrison said he's seen only a few. That could possibly be because when passengers do have symptoms, they may not relate them to their plane travel.

"I don't think passengers may be aware," Harrison said.

In a statement, Alaska Airlines said "our maintenance and engineering team have found that the overwhelming majority of the reported smells have nothing to do with the aircraft."

As for that July diversion to Kansas city, Alaska said it was "due to an odor detected in mid-cabin. The captain made the call … out of an abundance of caution." The airline made no mention of sick crew or passengers, even though in the control tower recording, the pilot clearly said that passengers on board were sick.

Jane, the flight attendant KPIX 5 spoke with for this story, said all the company is trying to do is bury the problem.

"Instances are still happening, so I don't think they are really doing much. I just want people to be aware that when they are exhibiting symptoms that they don't normally exhibit, especially if they are frequent fliers, to get themselves checked out," said Jane.

The FAA provided KPIX 5 with their own internal report on cabin air to prove their point that fume events are rare.

But the paper's conclusion is that it's not possible to quantify potential health risks without more studies. So far, there's no funding for that.

Here is the text to Alaska Airline's complete statement on fume events:

As part of our ongoing commitment to safety, we work very closely with our employees, unions and partners to immediately report, investigate, and solve any issues. Alaska speaks with our counterparts at Airbus and Boeing on a daily basis to ensure transparent communication and coordination as part of our regular check-ins. We have been in lock-step with Airbus to immediately investigate and resolve all reports of cabin odors. Of the recent cabin odor reports, our maintenance and engineering team have found that the overwhelming majority of the reported smells have nothing to do with the aircraft. Odors can come from many different sources not related to the aircraft, and as a result, we've taken immediate action to look into any possible sources by increasing inspections of cabin interiors, deep-cleaning onboard food and beverage equipment, and instituting mandatory engine run after engine washes.