Oakland police retweeted a pair of videos of Prime 356 as it was burglarized by several people who climbed over a fence to break in and steal from the shop late Monday.

The videos retweeted by the Oakland Police Department show frenzied scenes inside and outside the store as it was ransacked by people wearing masks and hoods.

Police responded to an 11:15 p.m. report of the burglary in the 300 block of 14th Street. Upon arrival, officers found forced entry. 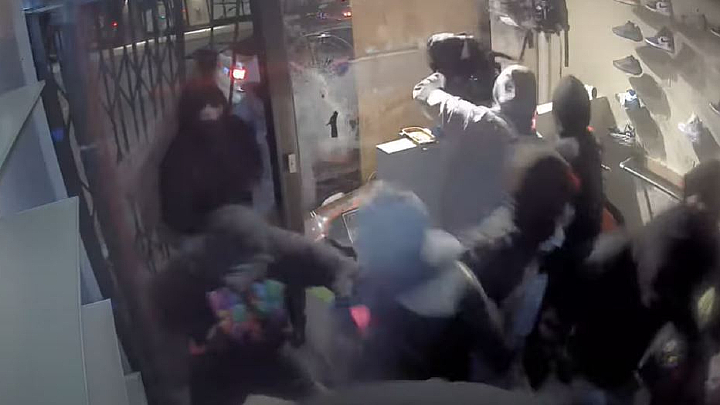 Police also found video from surveillance cameras inside the shop, which is one of the videos police shared.

The shop has started a fundraising campaign to offset losses from the second burglary of the shop in the past month.

"After the first unfortunate incident, we did what we could to increase security and changed our opening and closing procedures to include extra precautions to avoid any further violence," the owners said. "It is disheartening, that in spite of our efforts this happened again a mere month later."

According to the fundraising page, more than 30 people broke into the shop, ripping the security gate off its frame, breaking the front door frame, smashing windows and taking most of the store's inventory.

"These people stole a majority of our inventory and have essentially put us out of business for the time being, This is the second time our store has been broken into and robbed and we are struggling to continue operating as a business," the store posted on its fundraising page.

"As a store and a company we strive to be positive members of our community. We participate in clothing giveaways, Food drives, backpack drives and community uplifting causes regularly. We understand people are in need and we live in hectic times. We are just looking for some support to help us continue to operate as a business."

© Copyright 2021 CBS Broadcasting Inc. and Bay City News Service. All Rights Reserved. This material may not be published, broadcast, rewritten or redistributed.