SAN FRANCISCO (CBS SF) -- Investigators trying to unravel how a SUV careened off a Highway 1 cliff, wiping out five members of a Washington state family and leaving three others missing, say there is no indication that driver tried to avoid the fatal plunge.

"It was a confusing scene because there were no skid marks, there were no brake marks," he said. "There was no indication why the vehicle transverse the 75 feet of the dirt pullout and went into the Pacific Ocean." 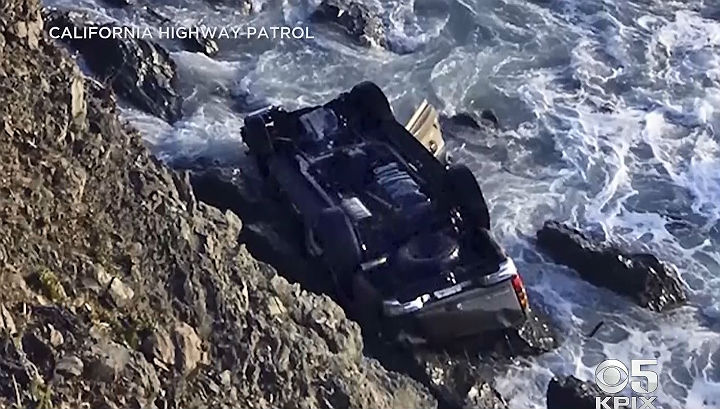 Allman said investigators were still even trying to determine when the crash happened.

Allman said the first responders noted that water in the wheel wells was warmer than the ocean waters. He said that may indicate the SUV had been on the its roof on the rocks for some time.

"The sun would have warmed up the water," he said.

The California Highway Patrol said the family's 2003 GMC was driving south along Highway 1 on Monday when it pulled into a dirt turnout along the road and for unknown reasons continued directly off the cliff. The vehicle landed on its roof on a large rock, killing all five victims found with the vehicle.

The two adult women were found inside the vehicle, Allman said, while the three teens were thrown from it.

Allman issued a plea to Bay Area residents, hoping someone had seen the family before the fatal crash.

"We want to know in the Bay Area if anyone recognizes the family," he said. "(They may have) stayed in a hotel, or eaten in a restaurant, getting some gas at a gas station...Any information on the whereabouts of these people 24 hours ahead of their tragic accident, we would appreciate."

When asked about the missing children, Allman said authorities have not given hope of finding them alive.

"The best news that we could get is that three of these victims were left with friends and were not in the vehicle when it went over the bank," he said.

But he admits that may just be wishful thinking.

"We have every indication to believe that all six children were in there," Allman said. "We know that an entire family vanished and perished during this tragedy."

Allman said his agency, the Coast Guard and California Highway Patrol would continue their desperate search of the beach area and waters for any sign of the missing teens on Thursday.