SANTA ROSA (CBS SF) -- Santa Rosa city buses raced into the Oakmont Village retirement community early Monday, frantically loading up elderly residents for a dash to safety as a flames and a massive cloud of embers from the Shady Fire advanced into Sonoma County and consumed homes in the Sky Hawk and Oakmont neighborhoods.

"We want to remind people when you get the Nixel (alert) and you hear that high low siren and you get the knock on the door, deputies or law enforcement officers telling you its time to leave -- it's time to leave," he said during a Zoom news conference. "Unfortunately, we did have some people that stayed behind and might have been burned in some areas."

"It's better that they leave that way we can sit there and do our jobs and not have to go back and rescue people which deputies had to do last," he added. "They were going back up to Los Alamos Road after people were refusing to leave and rescuing people out of their homes."

Elsewhere, residents of the Oakmont Gardens retirement community lined up to board the buses early Monday, many in wheelchairs, using walkers and carrying what few belongings they could. Nearby, the threatening orange glow of the advancing flames lit up the light sky. The buses drove through clouds of embers as they escaped to an evacuation center at the Santa Rosa Veteran Auditorium.

But by 3:11 a.m., the elderly residents were on the move again as officials -- "out of an abundance of caution" -- the Veterans building and the Santa Rosa Fairgrounds were closing as shelters and evacuees were moved to the safer confines of Petaluma. 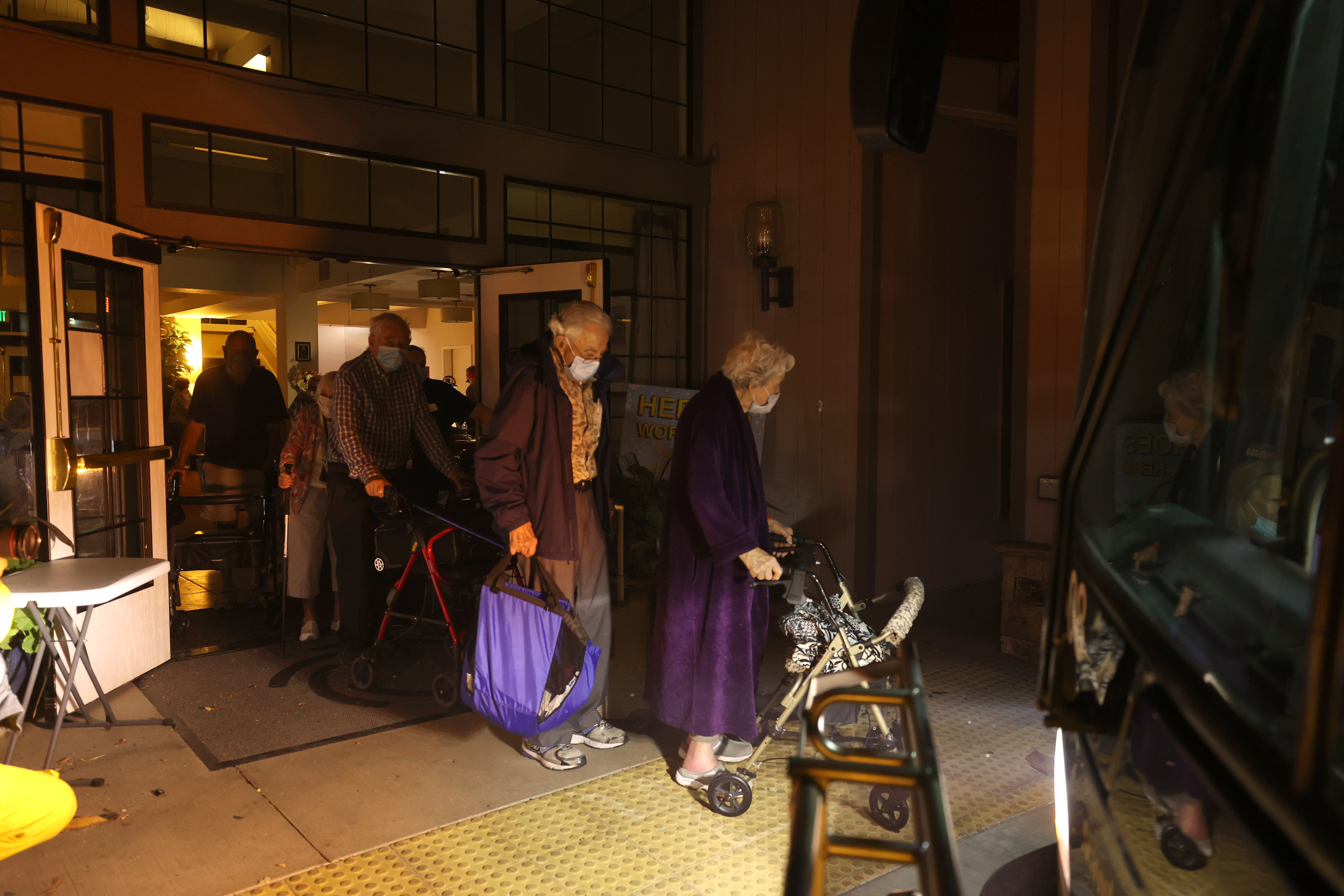 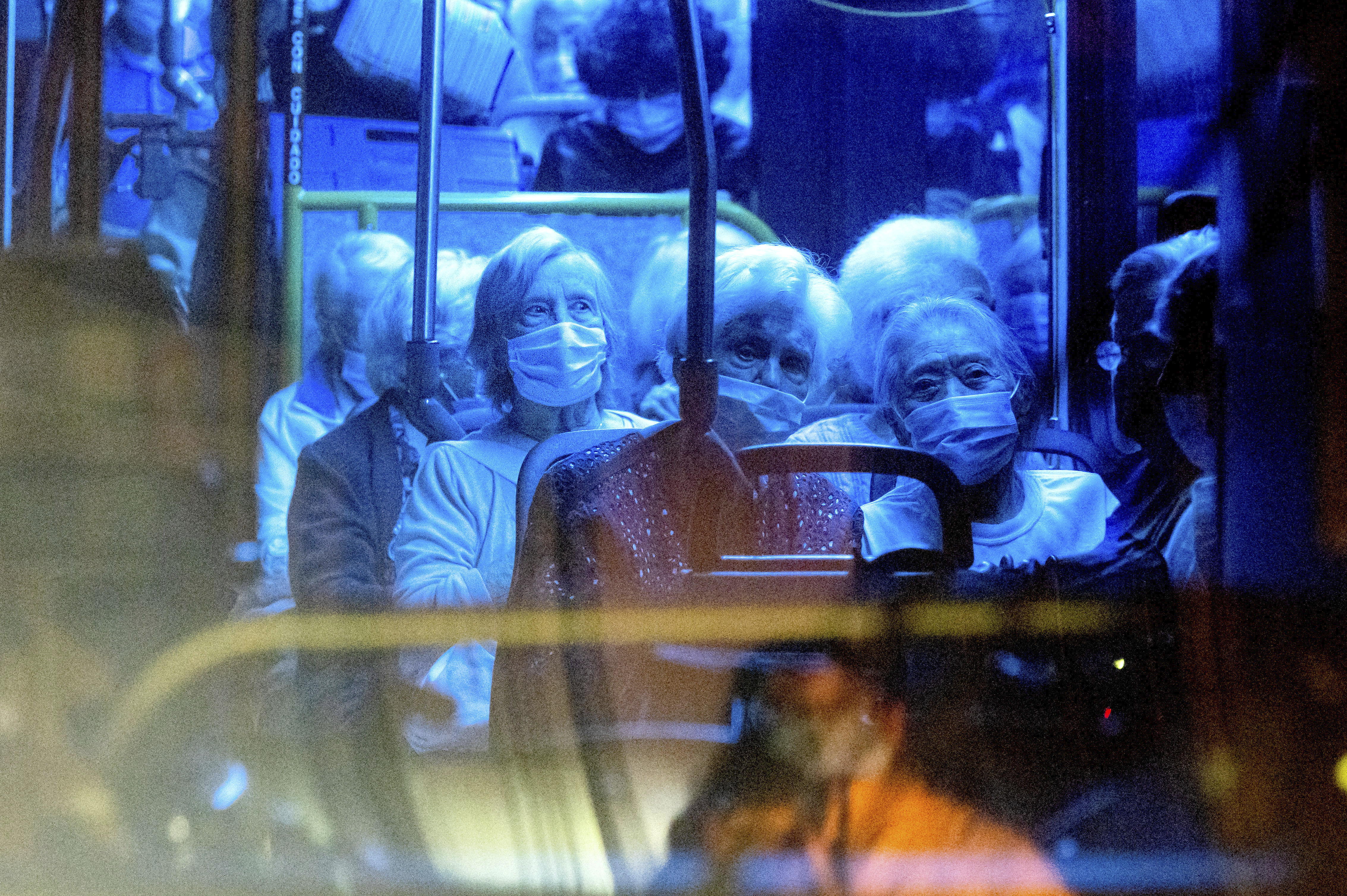 A cloud of hot embers was being blamed for homes fires throughout the Oakmont neighborhood.

The Red Flag winds were an issue all night long.

"Overnight winds in the North Bay ranged 35-55 mph in locations over 1000 feet, with some isolated pockets measuring 60 mph gusts," the National Weather Service said. "A station in the Healdsburg Hills (2480 ft) near the Mayacmas Mountains in far northern Sonoma County reported a max wind gust of 67 mph. In Santa Rosa, winds gusted to 30 mph as the fires were quickly fanned towards the southwest."

Meanwhile, Sonoma County Sheriff's deputies and Santa Rosa police officers raced door-to-door through threatened neighborhoods under evacuations orders to make sure they had fled. By early Monday, more than 10,000 residents had been forced from more than 6,500 homes.

Scenes that have become all to familiar to wine country residents unfolded in the Mountain Hawk neighborhood early Monday as entire blocks of homes erupted into flames triggered by the massive cloud of glowing embers. Firefighters battled the flames, but the advancing wall of fire proved to be too powerful.

The Shady Fire was one of three wildfires that erupted in the region on Sunday. On Monday, Cal Fire merged the Shady Fire with the Glass Fire, which was burning homes and wineries near St. Helena, and the smaller Boysen Fire. The total acreage for all three stood at 11,000 acres.

Red Flag Warning conditions set the scene for a flare-up in activity in the early morning hours with sweltering temperatures and dry, gusty offshore winds blowing through the area. The warning remained in effect until 9 p.m. Monday.

The Glass Fire had grown to over 2,000 acres by early Monday and was approaching Petaluma while the Boysen Fire was burning west of Petaluma.

"The winds have definitely picked up overnight," Santa Rosa Assistant Fire Chief Paul Lowenthal told KPIX 5. "They are strong, gusty, erratic winds. The fire has come over the hills into the Sky Hawk and Oakmont areas. It's on both sides of Highway 12 to the east of Skyhawk."

Officials advised evacuees not to use Petrified Forest Road to evacuate. Highway 29 is open to Lake County. Highway 128 was open to Sonoma County.

Evacuation warnings were issued for the areas of Summerfield, Spring Lake, Northeast 2 and Northeast/Middle Rincon shortly before midnight.

Evacuation for the entire area of Northeast 2:

The entire area of Summerfield:

The entire area of Spring Lake:

More detailed information on the evacuation orders can be found on the Santa Rosa Police Nixel alert page.

Sonoma Raceway has also opened its 50-acre campground to evacuees seeking temporary refuge from the fires.

The raceway, which is equipped to handle up to 2,000 campers during its major event weekends, is available for tent and RV campers in need of temporary shelter.

The campground is located directly across from the raceway on Highway 121 and has not been affected by the fires. The raceway will follow COVID-19 safety protocols during evacuation shelter procedures, including mandatory face coverings and social distancing. Evacuees seeking RV or tent camping at Sonoma Raceway should enter the campground at Gate 6 on Highway 121, a quarter-mile north of Hwy 37.