REDWOOD CITY (CBS SF) -- Under the glaring eyes of Laci Peterson's family, convicted killer Scott Peterson was resentenced by a San Mateo County Superior Court judge to life in prison without parole in the 2002 slaying of his wife and the couple's unborn son, Connor.

Peterson, wearing an orange jail jumpsuit, a COVID mask, and handcuffed to his chair, took his seat in the courtroom next to his attorneys.

Attorneys for both sides traded verbal jabs in their sentencing statements over Peterson's behavior during the 2002 search for Laci and also his extramarital affair with Amber Frey.

But the emotion came from three members of Laci's family in their victim statements. Judge Anne-Christine Massullo had issued a pre-hearing order allotting 16 seats in the courtroom for the friends and family of Laci in the jury box, facing Peterson.

Sharon Rocha, Laci's mom, looked back on a dinner she and her husband had with Laci and Scott 19 years ago on December 15th, shortly before Laci's disappearance. It was the last time she saw her daughter alive.

"Later that evening, when she and I were sitting on the sofa and I had my hand on Laci's stomach waiting for the baby to move and she looked at me and said, 'Scott doesn't want to do that. He doesn't want to feel the baby move.' And then she said, 'But he'll come around someday.' I could see the hurt in her eyes and that just broke my heart," Rocha remembered.

"I thought about all the while we were there that evening, you were already planning her murder," Rocha said. "You had already researched where you were gonna dump her body. You'd already bought the boat. You'd already told your girlfriend you'd lost your wife. It was clearly premeditated. There's no doubt about it. How evil you are."

"Scott, 19 years ago today you were in the midst of planning Laci's murder. You can bat your eyes, but it is the truth," she told the judge. "I see no sorrow, no remorse from you at all...I think about Laci every single day. She would have been 46 years old today, but she'll always be 27 to me. I miss her so much. I miss her friendship. I miss her laughter. I miss her personality, her humor, her companionship. I miss my daughter. Something that obviously you don't miss."

Amy Rocha, Laci's sister, made an emotional plea to the court.

"I would have loved to have been an aunt to Connor, too. I always wonder how big he would be now and what he would look like. I honestly don't know how you go on living like you haven't taken two beautiful lives."

"Because of you, our holidays have never been the same," she continued. "Every Christmas Eve I realize the nightmare we still all live in now. After becoming a mom myself I think of how she was robbed of that most wonderful experience. She would have been the best mom. You have broken all of our hearts."

"There are no words able to express the pain associated with not being able to experience life together," he said. "The sociopathic actions of Scott Peterson and the disregard for Laci and Connor's lives warrant the most severe punishment. He has shown absolutely no remorse and continues not to accept responsibility for his actions."

Seats for 16 members of Peterson's friends and family -- who entered the courthouse as a group -- were reserved elsewhere in the courtroom. 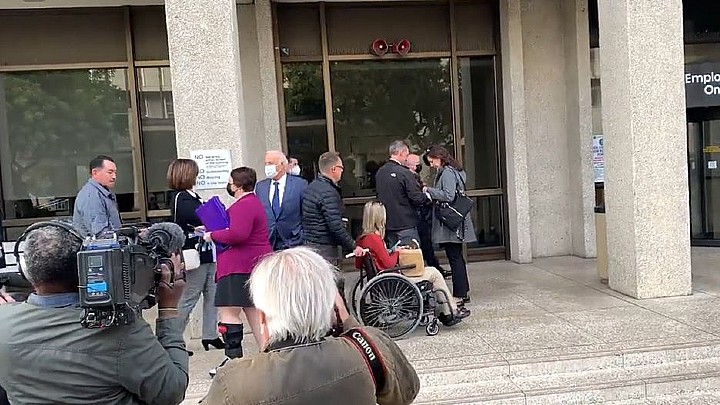 Peterson's death sentence was overturned on appeal by the California Supreme Court in August 2020, but the justices let his murder conviction stand.

Stanislaus County District Attorney Birgit Fladager, who came to fame as one of three prosecutors in Peterson's trial, opted this time to settle for life without parole.

"Once he was convicted and then sentenced to the death penalty, I think people pretty much said okay, it's time to move on. But here we are," LaDoris Cordell, a retired superior court judge, told KPIX 5. "The California Supreme Court said there was sufficient evidence of his guilt. So, they weren't concerned about whether or not there was an issue with the guilty verdict, their concern was with the sentencing."

As he did inside the courtroom during the resentencing hearing, Scott Peterson's attorney, Pat Harris, maintains Peterson's innocence. @KPIXtv https://t.co/ryFaqnOBzj pic.twitter.com/90ldFc82r8

Massullo will also decide if Peterson gets a new trial on the murder counts after a February 2022 hearing on his claims of juror misconduct at the original trial.

"The allegation is that a female juror lied when answering questions about her background and her own experience, specifically, with whether or not she'd ever been a victim of domestic violence," Cordell explained. "Any time there's juror misconduct, it doesn't automatically mean the case gets thrown out. The judge has to determine, did this juror's misconduct deny Scott Peterson a fair trial?"

Peterson, now 49, has spent nearly two decades on death row for the crime that captured the nation's attention. He was convicted in the San Mateo court after his trial was moved from Stanislaus County due to the massive pretrial publicity that followed Laci's Christmas Eve 2002 disappearance and the massive search that followed.

Investigators say Peterson -- who was having an affair at the time -- took the body of his pregnant wife from their Modesto home and dumped her remains from his fishing boat into San Francisco Bay, where they surfaced months later.

Appearing on CBS News' 48 Hours in May, former Modesto police detective Jon Buehler said the evidence in the case still all points to Peterson killing Laci during the Christmas holidays and dumping her body in the San Francisco Bay.

"There's nothing that has come out to change my view that Scott got a fair trial and that Scott is the one who killed Laci," Buehler said.

He said that two men arrested in a burglary in the Peterson's Modesto neighborhood around the time of Laci's disappearance were cleared of any involvement in the case.

"Both told consistent stories that were backed up by other independent witnesses," Buehler said.

He also points out that in the densely packed subdivision, no neighbors saw Laci get abducted in broad daylight.

"How come nobody saw Laci get abducted?" he said. "Nobody saw an abduction in broad daylight where a girl had a dog, and the dog would be barking, and a girl would be screaming. Tell me how that is going to happen because I don't see it."

Janey Peterson, meanwhile, has turned a room within her family business into a war room to aid in her efforts to free her brother-in-law. It is lined with maps, photos and notes.