SAN FRANCISCO (CBS SF) -- San Francisco has one of the most unequal distribution of incomes in the United States, according to a new study.

Between 2007 and 2013, the gap between the rich and the poor widened in 21 of America's largest 50 cities. The Brookings Institution reports:

Across the 50 largest cities, households in the 95th percentile of income earned 11.6 times as much as households at the 20th percentile, a considerably wider margin than the national average ratio of 9.3. This difference reflects the fact that in big cities the rich have higher incomes, and the poor lower incomes, than their counterparts nationally.

Atlanta, followed by San Francisco, ranked as the most unequal city in 2012 and 2013. Virginia Beach, Va. and Colorado Springs, Co. had the smallest gap.

Rich households in San Francisco grew by nearly 18 percent, equivalent to a $66,000 bump. The city stands apart from other cities like Washington, D.C. and New York, in just how rich its richest households were in 2013. In 2013, San Franciscans earned at least $423,000, more than $100,000 than counterparts in San Jose. 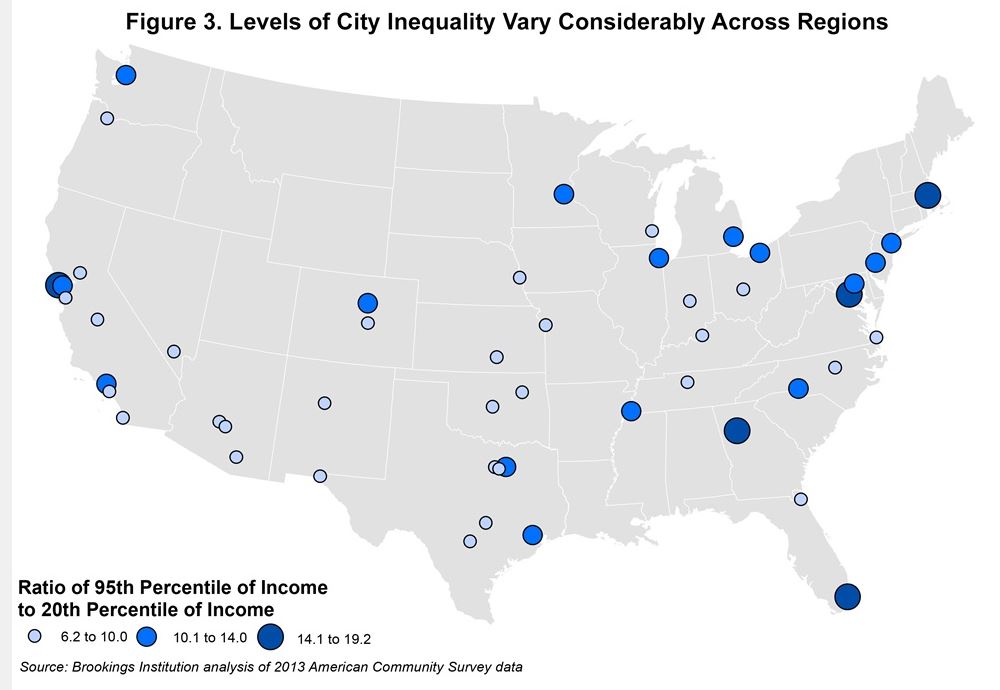 Meanwhile, San Jose's wealthiest households continue to get richer. The South Bay city witnessed a double-digit growth in the incomes of the 95th-percentile between 2012-2013, equivalent to a $34,000 increase. 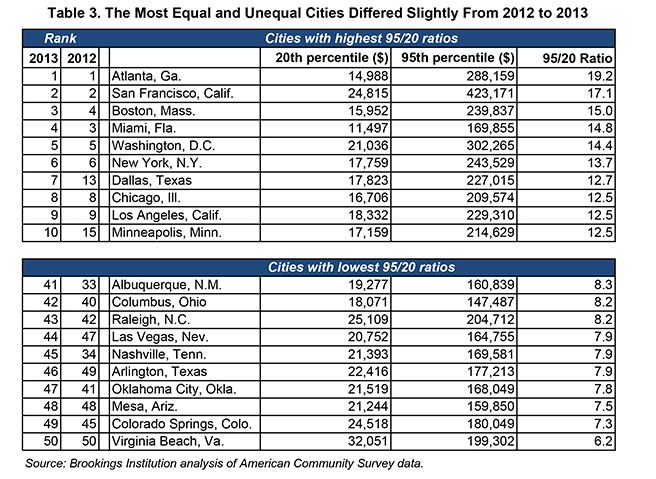 The growing income gap is shaping public policy for reducing the inequality. In 2014, 14 states and the District of Columbia enacted increases in their minimum wages.  Here in the Bay Area, San Francisco became the second city, after Seattle, to have the highest minimum wage in the country with an incremental increase that will reach its peak in 2018.

The minimum wage in Oakland became the highest in the Bay Area after jumping from $9/hour to $12.25/hour thanks to a voter-approved measure. Richmond also voted to phase in an increase to $13 by 2018.

Brookings' authors Alan Berube and Natalie Holmes notes while the minimum wage is an important method  for helping low-earner households living in high-cost places, "local policymakers should not ignore the other tools they have at hand—from education to economic development to housing and zoning policies—that are essential for improving social mobility and sustaining income diversity in big cities today."