SAN FRANCISCO (CBS SF) -- The San Francisco metropolitan area has the highest percentage of adults who identify as lesbian, gay, bisexual or transgender (LGBT) in the U.S., according to a new Gallup poll survey.

This may not come as a shock, but the same survey found San Jose -- home to the Silicon Valley and technology companies that have been among the most vocal supporters of LGBT rights in corporate America -- ranked as the fourth lowest percentage of LGBT population. 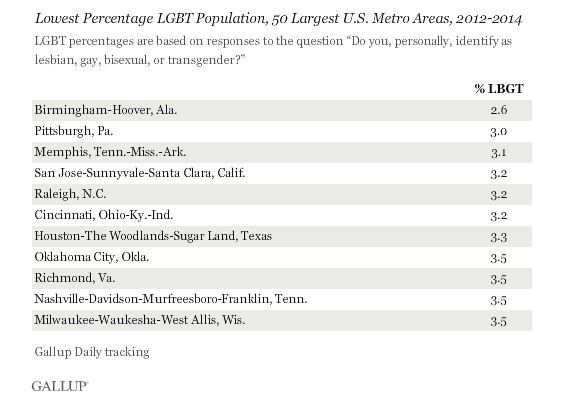 The top 10 cities includes metro areas from every region of the country except the Midwest.

Behind San Francisco comes Portland, Oregon and Austin, Texas -- all places known for their progressive social and political climates and active LGBT communities.

The ranking of Salt Lake City in the top 10 comes as surprising since Utah is one of the most conservative states in the country. The state, however, just passed a law prohibiting discrimination based on sexual orientation in the workplace and public accommodation -- the first state to do so since 2007. 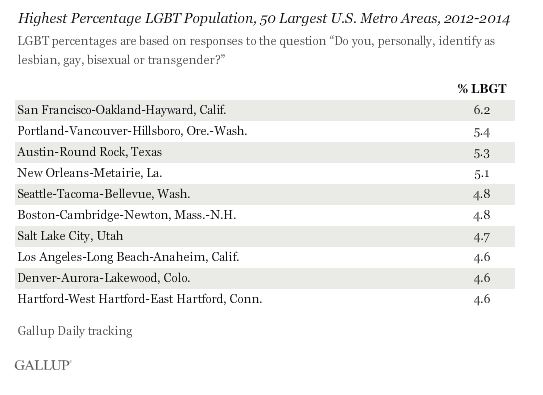 The results are based on responses to the question, "Do you personally identify as lesbian, gay, bisexual or transgender?" included in more than 374,000 Gallup Daily tracking interviews done between June 2012 and December 2014.

Newport said these rankings could be an indication of where LGBT adults choose to live. According to a Pew survey conducted in 2013, most LGBT adults said they don't live in their city based on social acceptance in that particular place.

While San Francisco may be one of the most desirable areas in the country for LGBT people to live, it also may be an area where residents feel more comfortable in identifying themselves as LGBT, Newport points out.