SAN FRANCISCO (CBS SF) -- Police in San Francisco are investigating an apparent racially fueled attack over the weekend targeting a man collecting cans in Hunters Point that was caught on video, according to authorities.

Video of the incident was posted on social media Sunday evening. The clip shows an older Asian man being taunted -- and at points, chased and threatened -- by at least two African-American men after they appear to have taken his shopping cart laden with garbage bags full of aluminum cans.

The area was later confirmed to be on Osceola Lane.

The confrontation, which happened in front of a crowd of onlookers outside a housing project in Hunters Point, turned uglier as one of the men loudly proclaims "I hate Asians!" and mocks the victim over the loss of his cans.

The clip created by user @nicholaaasli has amassed over 360,000 views on Twitter since it was posted 10:48 p.m. Sunday evening. Warning: Video contains harsh language.

A number of people commenting on the clip tagged the San Francisco Police Department's Twitter account, asking authorities to investigate.

The department account eventually responded that police had initiated an investigation and were attempting to identify the victim and witnesses. Police asked anyone with additional information to get in touch. 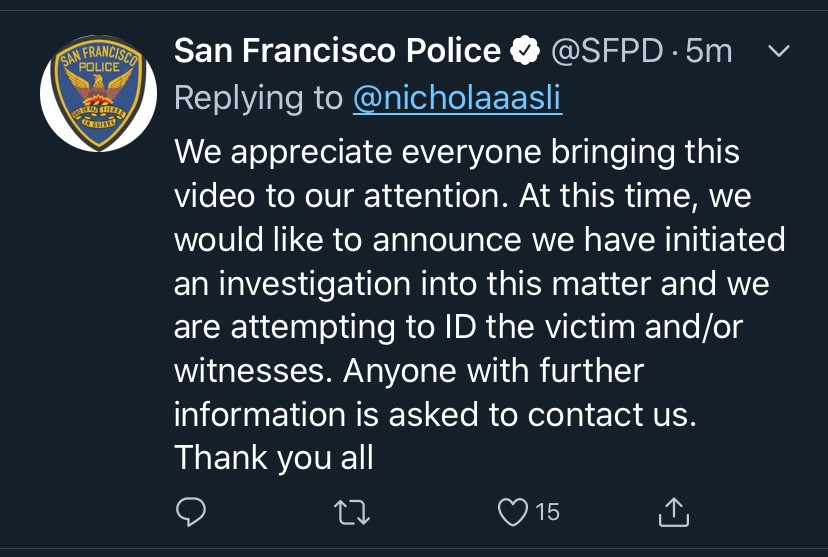 "The video does look like there was some type of altercation or robbery, or assault. We have to find out all that stuff in the investigation," said SFPD Captain Troy Dangerfield.

Cpt. Dangerfield says that it doesn't appear a police report was filed regarding the incident, so they are still trying to identify the victim, suspect and any witnesses.

The office of San Francisco Supervisor Shamann Walton, who represents District 10 where the incident took place, issued a statement condemning the assault and robbery.

"We absolutely do not tolerate any type of senseless violence and racism towards any of our community members especially towards our most vulnerable," the statement read. "It is heartbreaking to see this type of violence occur in our community, and no one should ever have to endure this."

"Seeing something like that is very disheartening…I didn't see anyone in that video try to stop what was happening from what was going on. That's why we have to educate our community about how to treat each other right and how to make sure we work together to stop bullying, to stop any type of madness like this," Shamann told KPIX 5.

San Francisco Mayor London Breed also denounced the actions of those in the video on social media, calling them "unacceptable."

"The actions depicted in this video are shameful and are not reflective of the San Francisco we can, and should be. Violence, bullying, and harassment are unacceptable and have no place in our city. We need work to bring our communities together, not sow hatred and division," Breed said on Twitter.

"This is just heartbreaking.," said Marlene Tran, spokesperson for the Visitacion Valley Asian Alliance, which has been working with police to find ways to keep people safe while building cross-cultural bridges within the community.

"It is hard to understand in a city like San Francisco how this could happen," she said.

Supervisor Walton said he is planning an event to bring people of different cultures together.

"The more time we spend around each other, the less likely we are to harm each other," Walton said. "We are already talking to leaders in the Chinese community and leaders across the city about doing something this week at the site. We plan to have conversations about how to educate people, about how to avoid issues like this, but really to build community across the board so that things like this never happen again."

Twitter users on the video thread also posted links to GoFundMe pages that had been set up to help the man, but it was uncertain how any funds raised would get delivered if the identity of the man remains a mystery.