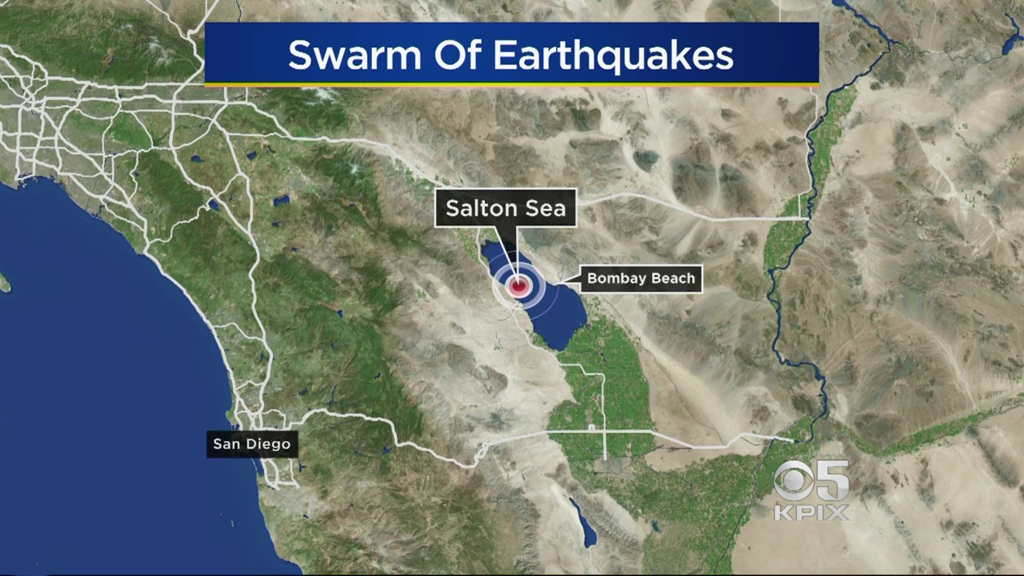 The Governor's Office of Emergency Services issued an earthquake advisory warning residents and officials in Ventura, San Diego, San Bernardino, Riverside, Orange, Los Angeles, Kern and Imperial counties that there was a greater possibility of a major earthquake through Oct. 4

The warning follows a series of small temblors deep under the Salton Sea, which is located on the 800-mile-long San Andreas fault.

Such warnings are typically issued once or twice a year, said Kelly Huston, the deputy director of crisis communications for the Governor's Office of Emergency Services.

The latest alert was issued after 142 temblors hit starting Monday near Bombay Beach at the southern end of the fault. Those quakes ranged from a magnitude of 1.4 to 4.3, the U.S. Geological Survey said.

Scientists estimate the probability of a quake with a magnitude of 7.0 or higher on the southern San Andreas fault being triggered is as high as 1 in 100 and as low as 1 in 3,000. The average chance for such an earthquake striking on any given week is 1 in 6,000. That heightened probability will last through Tuesday.

Earthquakes along the San Andreas typically occur every 300 years, said Morgan Page, a geophysicist with the USGS. Earthquake Science Center, but the southernmost end of the fault hasn't ruptured since 1690.

"There is significant stress stored on the southern end," Page said.

Gov. Jerry Brown on Thursday signed legislation to develop a statewide warning system to inform Californians of impending earthquakes through their cellphones, radios and other devices.

"California is earthquake country," said Mark Ghilarducci, the director of the state's Office of Emergency Services. "We must always be prepared and not let our guard down."

The swarm occurred in a region known as the Brawley seismic zone, which is located near a fault network that connects the southernmost end of the San Andreas fault with the Imperial fault.

In a tweet posted Friday, seismologist Dr. Lucy Jones said the swarm "is over & increased risk mostly gone" -- although she followed up with a tweet saying that doesn't mean "no threat."

TM and © Copyright 2016 CBS Radio Inc. and its relevant subsidiaries. CBS RADIO and EYE Logo TM and Copyright 2016 CBS Broadcasting Inc. Used under license. All Rights Reserved. This material may not be published, broadcast, rewritten, or redistributed. The Associated Press contributed to this report