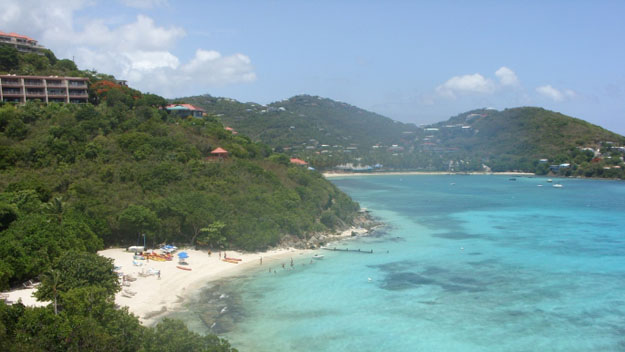 Featuring some of the world's best beaches and luxury hotels, the Virgin Islands can be the perfect romantic getaway for couples. "America's Caribbean Paradise" is graced with breathtaking natural beauty. Summer-like weather year-round and warm waters make it a breeze for a casual stroll along magnificent shorelines. For couples looking for recommendations for romantic lodging and dining and suggestions for the best sites to see, this helpful romantic getaway guide can assist prospective travelers in preparing for what could be one of the most unforgettable vacations in their lives.

Getting To The Virgin Islands

Because the U.S. Virgin Islands are a U.S. territory, no U.S. passport is required. However, a passport is generally accepted to be the best form of identification.

The Virgin Islands use the American dollar for its currency and the official language is English.

Getting Around
Car Rentals

Although most car rentals on the Virgin Islands are left-hand drive like the United States, motorists drive on the left side just like in great Britain. However, a car rental allows for more freedom to visit any of the islands, saves time and is more convenient. U.S. driver's licenses are valid for 90 days but those holding international driver's licenses must obtain a temporary foreign driver's permit. Seat belts are required and children under five must be in a car seat. Bike, scooter and motorcycle rentals are also available.

Taxi service is available on all three major islands using vans, SUVs, cars and trucks. Taxis are not metered and instead use a standard fare based upon point of origin and destination. Licensed taxis are identified with a taxi placard or dome light and license plates. Visitors must be wary of unlicensed taxis that typically park near bars and grocery stores. Although rates are standardized for licensed taxicab operators, passengers must agree to the rate, which will include number of people, luggage and waiting time. Because taxi fare can add up quickly, visitors are urged to consider renting a car.

One more affordable form of taxi service that operates on St. Thomas is known as dollar rides or dollar taxis. Dollar taxis do not have an identifiable sign but are said to follow the same route as the Virtran public bus service.

Public transportation operated by Vitran is available on all three major islands. However, while service is inexpensive, it's also said to be unreliable. St. Thomas has a service from the west end to the east end of the island, while bus service on St. Croix runs between the airport, Christiansted and Frederiksted and St. John has service between Cruz Bay and Coral Bay.

Related: How To Add Romance While Traveling With Kids
Romantic Hotels
The following are some of the most romantic hotels on the Virgin Islands

Named after a Danish queen, Charlotte Amalie is the capital and largest city of the Virgin Islands. The city offers a number of outdoor activities such as kayaking, scuba diving, snorkeling and world-class sport fishing as well as a number of interesting landmarks. Among the top sights to see are Magic Ice, St. Thomas Synaogogue, Blackbeard's Castle Cruz Distillery, University of the Virgin Islands and the 700-foot skylift to the top of Charlotte Amalie.

Magens Bay is  home to one of the world's most beautiful beaches and a can't-miss attraction on the island of St. Thomas. Located on the northern coast, the beaches can be quite busy and crowded, especially when cruise ships are docked. But Magens Bay is one of the most popular spots on the Virgin Islands and offers a number of outdoor activities like kayaking, snorkeling, hiking and camping.

Encompassing some 60 percent of the entire island of St. John, this U.S. national park is best known for world-class scuba diving and snorkeling at Trunk Bay and Cruz Bay and hiking picturesque trails like Cinnamon Bay and Bordeaux Mountain Trail. Visitors should also not miss the historic Annaberg sugar plantation.

Located at the end of King Street in the historic town of Christiansted, this site was once the capital of the Danish West Indies. Many of the original 18th and 19th century buildings still stand, including Fort Christianvaern, The Danish West India and Guinea Company Warehouse and the Steeple Building.

Buck Island lies off the northeast coast of St. Croix just 1.5 miles away. Most of the monument is underwater to protect one of the best coral reefs in the Caribbean Sea. This is a very popular spot for snorkelers, who can follow a marked underwater trail, one of only of three in the U.S.

Related: Have A Romantic Vacation In Hawaii
Randy Yagi is a freelance writer covering all things San Francisco. In 2012, he was awarded a Media Fellowship from Stanford University. His work can be found on Examiner.com Examiner.com.