RICHMOND (CBS SF) -- Forget impeccable customer service and superb-quality food -- one Richmond restaurant is working to become the worst-rated restaurant in the Bay Area as a way to fight against the crowd-sourcing business review website Yelp.

Botto Bistro's top weapon is encouraging its customers to leave one-star Yelp ratings and to write negative reviews. In exchange, the Italian restaurant is giving them 25 percent off any pizza and a chance to win a cooking class.

"Tell the world how horrible our establishment is, talk about the toilet seat temperature, the aliens in our bathrooms, how much you hate our food, and so on," said a statement on Botto Bistro's website. "In other words just be a professional Yelper! Hate us and we'll love you!"

So what would inspire veterans of the local dining scene to taint their image? Botto's owners and other critics say Yelp will offer to remove or bury negative reviews in exchange for buying advertising.

Yelp denies manipulating reviews and ratings. But according to chefs and co-owners Davide Cerretini and Michele Massimo, they're sick of the constant advertising inquiries from Yelp, going as far to call it "blackmailing."

Recently a judge dismissed a claim against Yelp alleging the company extorted or attempted to extort advertising purchases from them by moving unfavorable reviews higher and either moving favorable reviews lower or removing them if the businesses declined to buy ads.

Yelp spokesman Vince Sollitto told CBS 5, "Businesses cannot pay to remove or alter their reviews and Yelp's recommendation software treats all businesses the same, regardless of advertiser status. Since our whole business is based on consumer trust, we take this issue very seriously and have not and would never engage in such a practice."

Cerretini told the San Francisco Chronicle that his business has even increased since he began battling Yelp, and that he'd be happy to have Botto Bistro completely removed from Yelp altogether.

Yelp isn't too happy with Botto Bistro's campaign. The company has asked the restaurateurs over email to immediately discontinue offering incentives in exchange for reviews.

Cerretini cheekily fired back, expressing his distaste for Yelp's policy of allegedly removing reviews in exchange for "vague explanations." You can read the full emails here and check out some of the "unforgiving" Yelp reviews below. 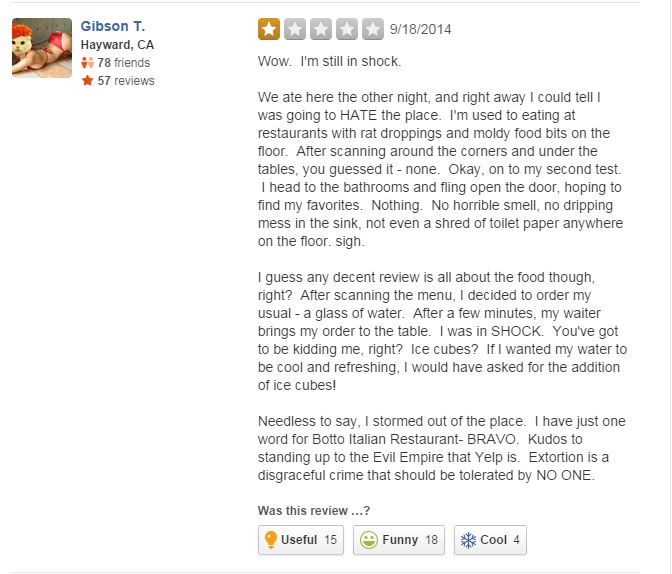 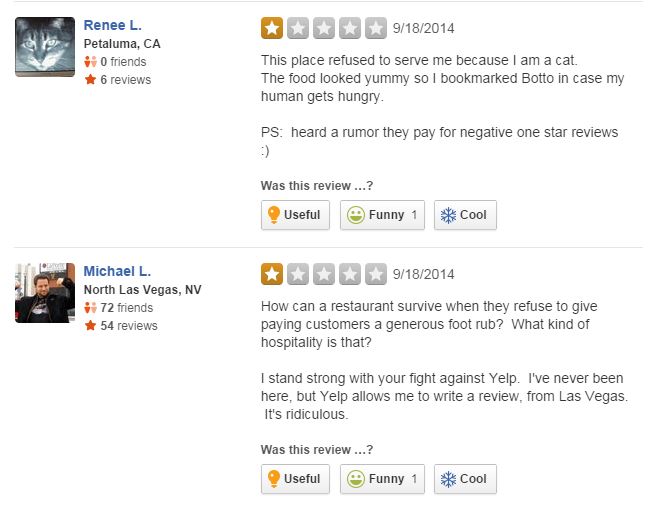