Much of California was already in drought conditions before the heat wave began on Friday, but Saturday brought the threat of thunderstorms and wildfires to some areas of the state.

"Fire Weather Watches for lightning were issued overnight," the National Weather Service said in social media posting Saturday morning. "We will be having conference calls with partner agencies and surrounding offices to make decisions on upgrade. Lightning already developing over Santa Barbara and SLO counties." 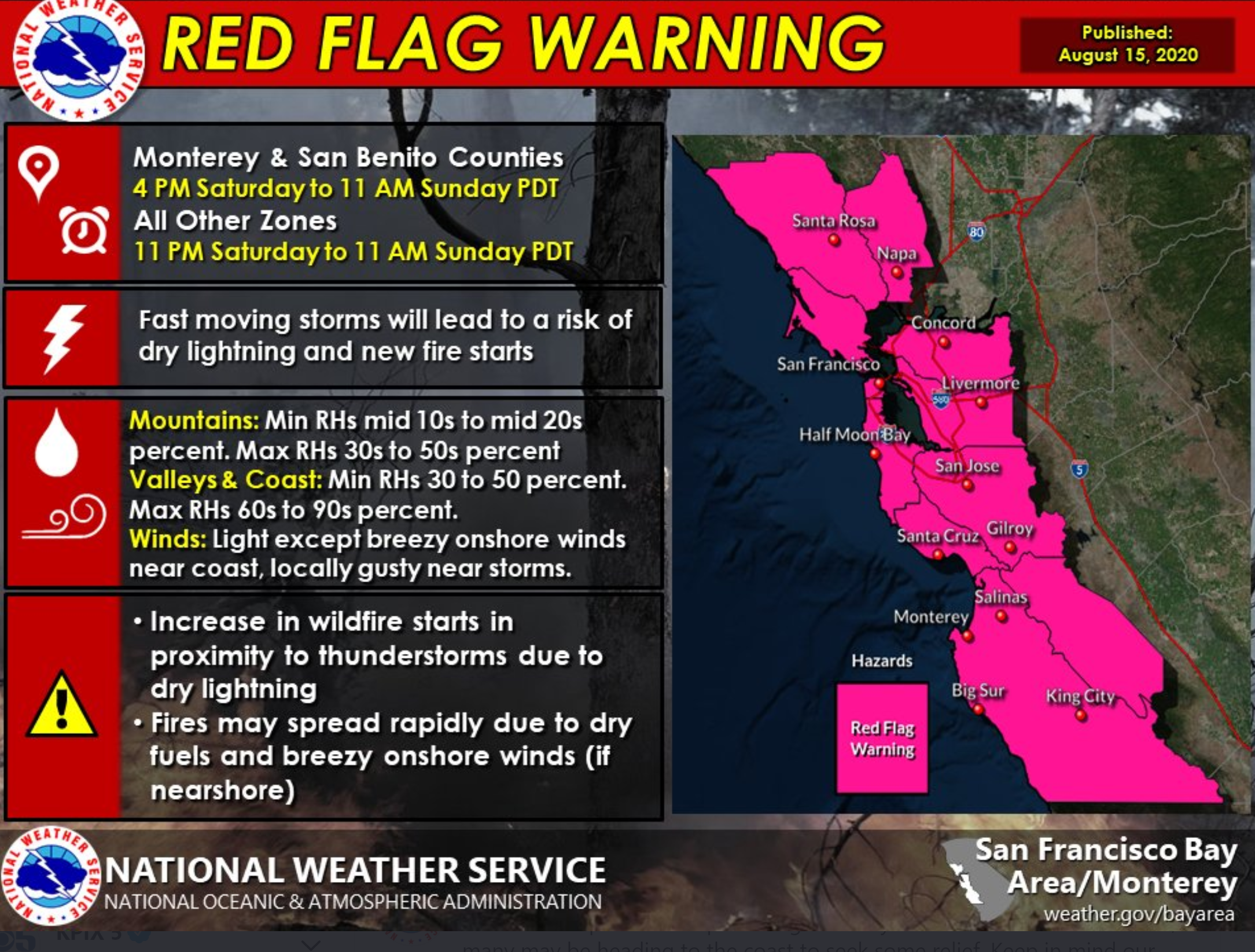 Heat records fell in several cities on Friday. Downtown San Francisco hit 90 degrees, topping a high for the date of 86 that was set in 1995. Salinas hit 102, 18 degrees above the record set just last year. Palm Springs hit 120, breaking a 2015 record by several degrees.

More records may tumble on Saturday. 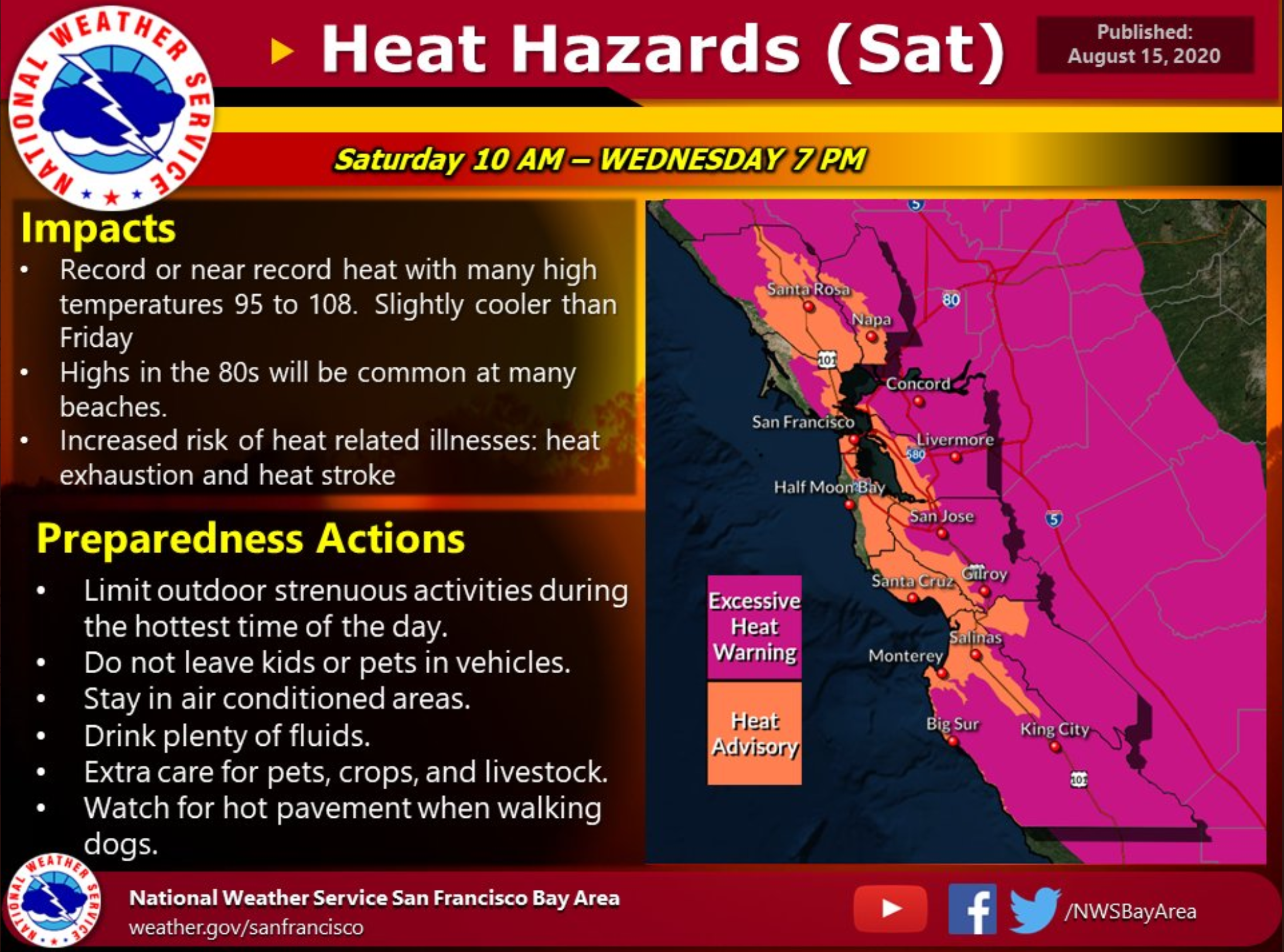 "A long duration heat wave will impact the region through at least Wednesday of next week, and possibly beyond," weather forecasters warned. "Excessive heat will target interior locations for the full duration of the heat event, with persistent daily afternoon highs in the upper 90s to mid 100s across the interior."

The heat wave forced state power grid officials to order the first state-wide rolling blackouts on Friday night since the 2001 energy crisis. They continued to monitor energy demands on Saturday.

The grid managers -- California Independent System Operator -- issued a Stage 3 Emergency at 6:36 p.m. as demand neared the system's maximum output. They ordered utilities to implement rotating power outages immediately to protect the stability of the grid.

"By 7:51 p.m., the grid had stabilized, and utilities began restoring 1,000 megawatts of electricity that had been taken out of service," the agency said. "The emergency declaration was lifted at 8:54 p.m."

Lights went out at homes from Santa Rosa to the South Bay in the San Francisco Bay Area. PG&E was forced to cut off electricity to approximately 220,000 customers. A vast majority had their power restored by early Saturday.

"Due to the emergency, PG&E was unable to notify customers in advance of the rotating power outages, which impacted customers earlier this evening for a few hours in the following counties: El Dorado, Marin, Napa, San Mateo and Sonoma," utility officials said in a release.

The heat wave also triggered COVID-19 concerns as thousands flocked to beaches and outdoor parks to beat the heat. Pacifica's mayor urged people to stay away from his city's beaches.

"The beaches are jam-packed, they're jam-packed during the week," said Mayor Deirdre Martin. "I'm seeing volleyball games, I'm seeing drinking games going on, I'm seeing football games and it's just highly suspect that those folks are not from the same family."

KPIX 5 captured video of throngs crowding Pacifica beaches, including at Linda Mar Beach. Some were not wearing masks or social distancing. Bay Area residents said that type of activity is not only happening in Pacifica.

"It's been packed and we're suffering, I think, what Lake Tahoe is feeling," said Half Moon Bay resident Brent Turner.

Turner is part of a group of residents who have reached out to city, county and state leaders to try to shut down beaches on the weekends but they've had no luck.

"I just think it's the worst breach of public duty," Turner said. "When a pandemic happens and you're on duty I think you put the health and safety of the citizens first."