ST. HELENA (CBS SF) -- The lights went back on across wine country early Wednesday as Pacific Gas & Electric crews were able to restore electricity that had been shut off to thousands of homes as a precaution during several days of extreme fire danger.

Utility officials said most of the 350,000 customers in the latest PG&E Public Safety Power Shutoff have had electrical service restored and the remaining 45,000 accounts in the dark should be reconnected by noon Wednesday.

PG&E expected the majority of the restorations to be made Tuesday night, following the shutoff that had some locations without power for three nights.

Checks of the power grid by 65 helicopters, on airplane and 1,800 personnel on the ground, turned up 130 identified cases of wind damage or potential hazard and the number of cases was expected to increase as the inspection continues, said PG&E Incident Commander Mark Quinlan.

The National Weather Service said as of 3:20 a.m. Monday wind gusts in the 60-50 mph range continued to howl in the mountainous areas above wine country. Overnight gusts on Mt. St. Helena reached 89 mph with sustained winds of 76 mph. 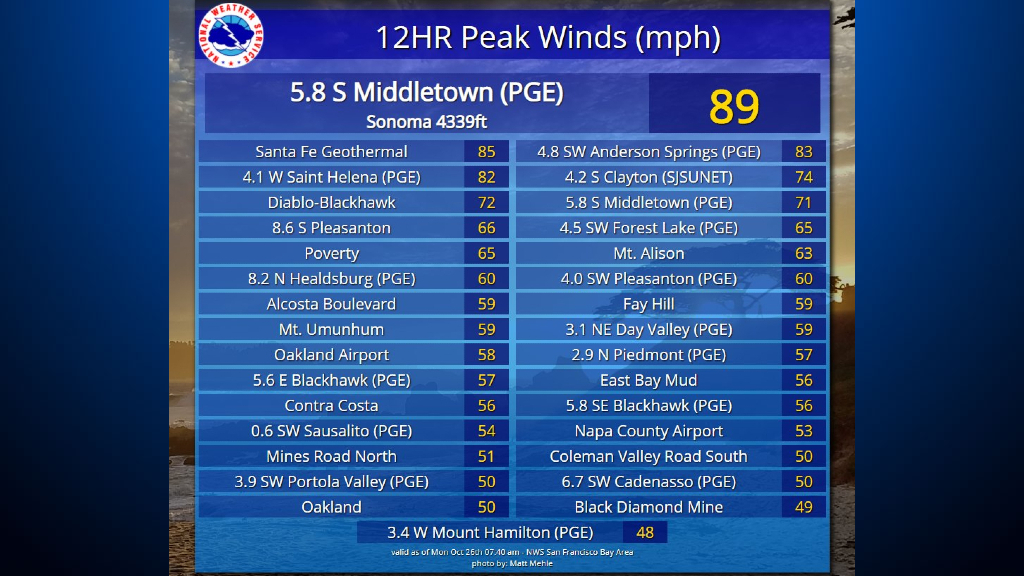 Quinlan said there were some pretty significant damages to the system including lines taken down by trees that could have ignited wildfires.

Current forecasts do not show potential for another shutdown in the the next 10 days, officials said.

More information on the current PSPS event including a map of the ongoing outage area are available on the PG&E PSPS website.