BERKELEY (CBS/AP/BCN) -- Trump supporters and anti-Trump activists exchanged blows and bloody noses after a protest turned violent at a park in Berkeley on Saturday.

Organizers dubbed the protest a "Patriot Day" for people who support the president. Counter-demonstrators vowed to show up.

Before the M-80s, the fist fights and the rocks, police maintained some semblance of order as the protest got underway around 10 a.m.

Their strategy was to confiscate weapons and form a line between Trump supporters and anti-Trump protesters.

That peace tactic worked for about an hour. That's when protesters jumped over the police line to fight each other.

A Trump supporter was the first casualty of the day. He had blood streaming out of his face.

"Well, they want to hit me with brass knuckles from my blind side, said John Beavers of Washington, his nose gushing blood.

"They hit me twice while I was down, it was sad," said David Fry, from the same state.

Police began arrested people, but things soon turned into total chaos as both camps left the park and began to fight on the street. According to Berkeley Police Department, 20 people were arrested. They say more people will likely be arrested once they review videos posted on social media.

Officers were outnumbered and had to watch the fights from a distance.

The dueling rallies grew to a large mob of roughly 1500 people, fighting all over the place. 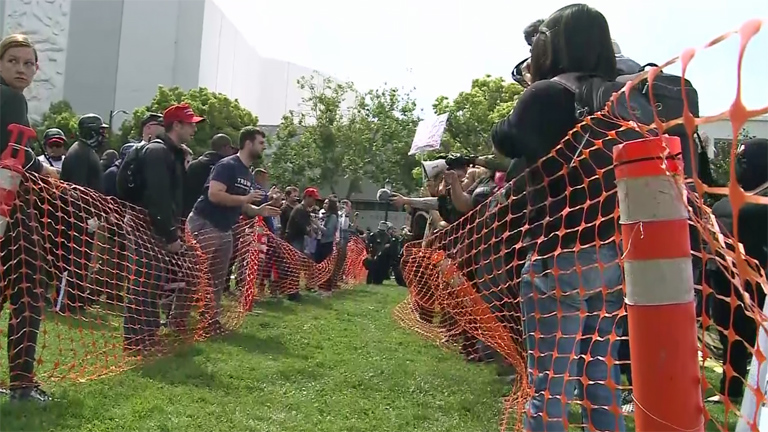 Aside from using their fists, people threw M-80's, rocks and bottles at each other. Others used pepper spray.

"I got pepper sprayed and hit by a bunch of sticks," said anti-Trump activist Al Alegria of Sacramento.

Many photojournalists and reporters were caught in the middle of the chaos, and had to wear helmets to avoid getting seriously hurt. Nonetheless, some did.

Police confiscated knives, poles, helmets, sticks, eggs and other objects that could be used as weapons.

According to police, 11 people were injured an treated by paramedics. Seven were transported to local hospitals. One of them had been stabbed.

Many of the peaceful demonstrators left fearing for their own safety.

"There's a difference between free speech and free action," said Esfandir, an anti-Trump protester. "What we're seeing here is action."

A similar protest at the same park erupted in violence last March.

In February, protesters threw rocks, broke windows and set fires at UC Berkeley, where then-Breitbart News editor and provocateur Milo Yiannopoulos was set to speak. His appearance was cancelled.