Wednesday afternoon, a mud and rock slide on Highway 17 at Sugarloaf Road closed southbound lanes at around 1:30 p.m.

Within 45 minutes, one lane was opened, but at around 2:50 another slide at the same location had once again blocked all southbound lanes in addition to closure of the #1 northbound lane for clean-up crews.

CHP reopened the northbound lanes shortly after 10 p.m. One southbound lane remained closed and there was no estimated time of reopening as of 10 p.m. Wednesday evening.

A warning for the Guadalupe River in San Jose has been canceled. The warning for southeastern Sonoma County expired at 10:45 p.m. while warnings for the Napa River near Napa and near St. Helena remain in effect.

Weather officials also have added flood warnings for the Russian River at Johnson's Beach near Guerneville until further notice and for urban areas and small streams in southeastern Marin County until 2:45 a.m. Thursday.

Thousands of PG&E customers were without power as of early Wednesday evening as a result of heavy rain and gusty winds that have come through the Bay Area and caused flooding, downed trees and other problems.

According to PG&E, there were 8,053 utility customers in the Bay Area without power as of 5 p.m. Wednesday.

The majority of outages were concentrated in the South Bay, with 5,062 customers affected, followed by 1,665 in the North Bay and 933 on the Peninsula. The East Bay was only reporting 358 customers without power, while San Francisco had only 35.

Only a few hours earlier, more than 15,000 PG&E customers were without power, so crews have been making some progress.

The storm had caused the cancellation of 138 flights at San Francisco International Airport as of Wednesday afternoon, with more than 300 others delayed, airport officials said.

For some North Bay residents, this storm is being described as a nuisance. There haven't been any evacuations or rivers overflowing. The most common call the Sonoma County Sheriff is getting is from people who tried to pass on flooded roads and failed, causing their car engine to stall.

"The last thing we want to do is respond to someone who drove through a road closed sign. That draws our resources away from their needs," Paul Lowenthal, the Assistant Fire Marshall for the Santa Rosa Fire Department said.

21 roads were closed due to flooding in Sonoma County. Lowenthal said the city has handled flooding well so far, but added that there could still be problems as the storm progresses.

"We're just waiting to see what it does this evening as the winds intensify," he said.

PG&E opened its Emergency Operations Center and has double the usual number of crews staffed for the storm.

"So far it's started slow. We're expecting more tree-related outages," PG&E spokesperson Deanna Contreras said. "If you see a downed power line, assume its energized and call PG&E if you can."

Earlier Wednesday, many of the problems on roadways seemed to be concentrated in the North Bay.

A downed tree on northbound Highway 101 in Petaluma caused CHP to trigger a severe traffic alert shortly after 11 a.m. Wednesday. The tree had fallen near East Washington Street and all lanes are blocked.

Motorists are advised to expect delays and to use alternate routes to avoid the area. The tree was cleared and all lanes reopened at about 11:40 a.m.

CHP additionally reported that flooding had shut down CA-1 at two points between Petaluma Valley Ford and Middle Road in Valley Ford as well as between North Bay Hill Road and South Harbor Way in Bodega. All lanes remain closed in both directions at both locations.

Petaluma police were also reporting flooding in several areas, tweeting that Stony Point Road was closed between Petaluma Boulevard North and Pepper Road, while drivers were warned to use caution on Lakeville Highway due to minor flooding.

Marin County Fire announced that Platform Bridge Rd. was closed due to flooding and was inaccessible from Sir Francis Drake or Petaluma Pt. Reyes Rd.

The Marin County Sheriff reported that Drake Avenue had completely flooded at Donahue Street, closing the street at around 1 p.m. By around 5 p.m., it had reopened.

The Novato Library will remain closed because of the rainstorms in the region and unresolved leaks, Marin County Library Director Sara Jones said Wednesday.

The Novato branch at 1720 Novato Blvd. closed Dec. 1 for renovations of the heating, ventilation and air conditioning systems. The library reopened Jan. 22 but roof leaks forced it to close on Feb. 2.

The library was to reopen this Saturday, but Jones said it will stay closed as a precaution for two more weeks to prevent damage from storms and unresolved leaks. The reopening is now scheduled for March 2.

The South Novato Library at 931 C St. in the Hamilton neighborhood will continue extended hours through Feb. 28. There will be no charges for returning late materials. A pop-up library branch in the Northgate Mall in Terra Linda will remain open through March.

Libraries will be closed for President's Day on Monday.

The storm had Sonoma County in its bulls-eye overnight as an Urban and Small Stream Flood Advisory was issued for the area by the National Weather Service.

Fueled by a steady downpour, Santa Rosa Creek overflowed over its banks into a nearby vineyards. The California Highway Patrol reported that several vehicles were stuck in standing water on Green Valley Road in Graton and two vehicles were trapped in two locations on Eastside Road, west of Windsor. 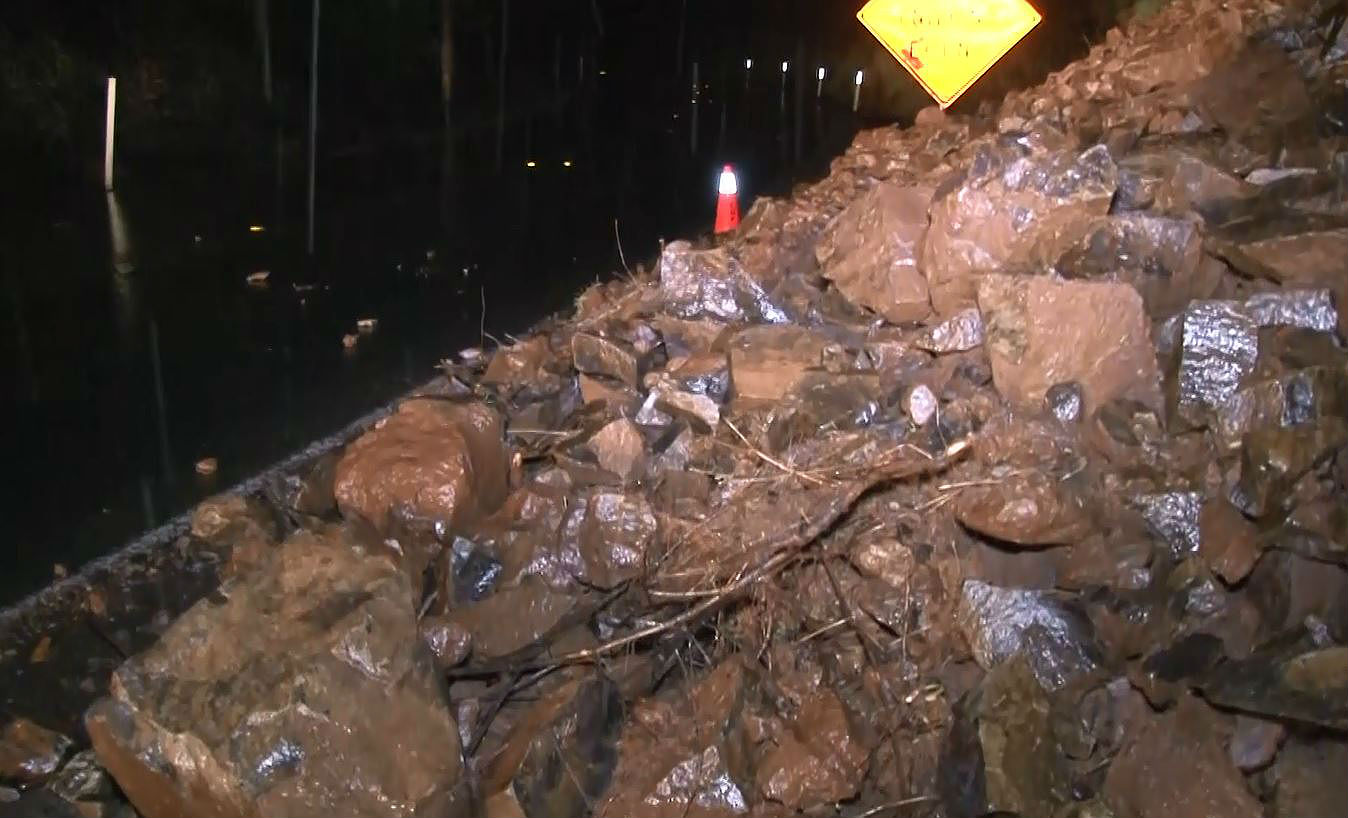 "Several reports from local law enforcement indicated flooding over roadways in the region (the North Bay) as rapid rises continue on area creeks and streams, especially those draining into the main stem rivers," the weather service said.

Willow Brook at Penngrove Park was above moderate flood stage by 7:30 a.m. Sonoma County officials reported that Skylane Blvd was closed between Airport Blvd and Kittyhawk Blvd due to flooding.

The weather service said several rivers including the Russian, San Lorenzo, Pajaro, Carmel and Big Sur will see rapid rises over the next 24 to 48 hours because of storm runoff.

The Russian River at Guerneville was forecast to rise above flood stage by Friday. The river was projected to reach 34.4 feet, above the minor flood stage of 32 feet.

In San Francisco, minor flooding closed the Great Highway at Lincoln along the coast line Wednesday morning. Additional flooding was being reported on the Embarcadero as well as in the Bay View and at the Alemany Farmers Market on the southern end of the city.

Traffic into San Francisco was slowed around 7:30 a.m. by a motorcycle crash and the commute from the Carquinez Bridge to the MacArthur Maze was taking an hour.

A fallen tree in in Walnut Creek was blocking the 1500 block of Homestead Avenue between Seven Hills Ranch Road and Danforth Lane, according to a statement police issued online just before 10 a.m.

Crews were working to clear the scene.

In Castro Valley, a sinkhole opened up on Somerset Avenue were a water main broke in the midst of the storm. An SUV got stuck in the sinkhole, but the driver managed to get out of the vehicle without injury.

East Bay MUD officials were uncertain if the storm contributed to the water main break, but crews were investigating as the worked to fix the problem.

CHP in Santa Cruz tweeted a photo of a car that got stuck on a flooded road that showed the vehicle in water that was at windshield level, warning drivers not to tempt fate.

Minor mudslides were also reported throughout the Bay Area.

"Recent rainfall has saturated soils across the area, and the additional heavy rainfall will create the potential for widespread shallow landslides, rockslides, and debris flows," the weather service said. "Periods of heavy rainfall will likely inundate storm drains with rapid rises on small creeks and streams."

Gusty winds also toppled trees and power lines in the region. A power outage in San Jose darkened more than 1800 homes while trees had fallen in Atherton and on Foster City Boulevard.

The weather service issued a high wind warning for the Bay Area until 10 a.m. Thursday.

"Strong winds may blow down limbs, trees, and power lines -- scattered power outages were expected," the weather service warned. "Sustained wind speeds of at least 40 mph or gusts of 58 mph or more can lead to property damage."

Officials also announced that the increment weather had forced them to close the Oakland Zoo.