The press conference at the utility's San Francisco headquarters marked the first time the company's head had publicly addressed the shutdown.

"We faced a choice between hardship on everyone or safety and we chose safety," said Johnson. "And I do apologize for the hardship this has caused, but I think we made the right call on safety."

Johnson also apologized for all the technical problems with the PG&E website and promised to get them right next time.

"Our website crashed several times. Our maps are inconsistent and maybe incorrect. Our call centers were overloaded," said Johnson. "To put it simply, we were not adequately prepared to support the operational event."

Earlier, Gov. Gavin Newsom said Pacific Gas and Electric's decision to cut power to a million people in Northern California to prevent a catastrophic wildfire should not be blamed on climate change. Instead, he said he believes the blackouts were the result of mismanagement, "greed and neglect" by the nation's largest investor-owned utility.

"What has occurred in the last 48 hours is unacceptable," Newsom told reporters on Thursday. He listed problems such as school closures and people who "can't even access water or medical supplies."

Newsom criticized PG&E for neglecting its power-supplying equipment when it should have modernized it in response to a changing climate that has made California more susceptible to wildfires.

PG&E suggested it was already seeing the wisdom of its decision borne out as gusts topping 77 mph raked Bay Area hilltops amid a bout of dry, windy weather.

"We have found multiple cases of damage or hazards" caused by heavy winds, including fallen branches that came in contact with overhead lines, said Sumeet Singh, a vice president for the utility. "If they were energized, they could've ignited."

PG&E officials announced Thursday afternoon that improving weather conditions in areas impacted by the Public Safety Power Shutoff had improved enough for an "all clear" to be issued for crews to begin safety inspections.

At about 3 p.m., the Alameda County Sheriff tweeted that crews had also been given the all clear to begin power restoration inspections in the East Bay, though officials said customers could be without power into the evening.

At around 4 p.m., the City of Vacaville Twitter account confirmed that PG&E had given Solano County the all clear to begin inspecting power lines.

The all clear means PG&E crews will begin to visually inspect power lines to check for potential weather-related damage to the lines, poles and towers from high winds. The inspections will be done by vehicle, foot and air.

Outside of the Bay Area, the all-clear was given in the following counties: Alpine, Amador, Calaveras, Mariposa, Merced, Monterey, San Joaquin, Stanislaus and Tuolumne. A partial all clear was given in El Dorado and Placer counties.

According to numbers provided by PG&E late Thursday evening, power was back on for 425,956 customers. That is approximately 58 percent of the total number that had lost power. About 311,000 were still in the dark.

Pleasant Hill resident Brooke Henrickson has been dealing with the outage since 11 p.m. Wednesday night.

"We took cold showers this morning, which was fun. And we are walking to school because we don't want to deal with the traffic," explained Henrickson.

Even a generator powering traffic lights at an intersection overloaded and had to be replaced. Meanwhile the local Starbucks was packed with people trying to get things done.

"We are displaced for the day and we've killed car batteries trying to keep equipment running, because we still have job sites working," said Diablo Valley handyman James Yancey.

He said the ETA of re-energization kept getting pushed back. The uncertainty is frustrating. But PG&E insisted it had to wait for the threatening weather to pass before it could first inspect lines and then turn them back on.

More than 6,300 PG&E workers are fanning out on the ground to inspect lines for damage.

The power was out in one Napa neighborhood, leaving the Internet down and children playing in the street. Napa resident Gabriela Villasenor said thanks to PG&E, it is back to the future.

"It's what it was like when we were growing up, you know? This is what it was like," said Villasenor. "We all played in the street. That's what I tell my kids. We went outside to find someone to play with."

Naia and her mom Esther still had no electricity to get their refrigerator working. They are using coolers with ice to keep food safe.

The sound of running generators echoed across the neighborhood but only at a few homes. The generators must be refueled every few hours so feeding them is expensive.

The local auto repair shop Young's Automotive was barely getting by on one small generator. Owner Michael Hennion said he's taking care of business the old fashion way with pen and paper.

PG&E is saying the power may be out in some areas for several more days with inspections limited do daylight hours.

Early Thursday morning, more than 500,000 Bay Area residents woke up in the dark in the wake of a preventive Pacific Gas & Electric power outage as wind gusts topping 70 mph howled through the Bay Area hills.

The winds and extremely dry conditions sparked an early morning wildfire in a Moraga neighborhood, forcing residents to spend the night in an evacuation and store parking lot until firefighters tamed the flames around 5:40 a.m.

No homes or structures were destroyed by 40 acres had been charred. 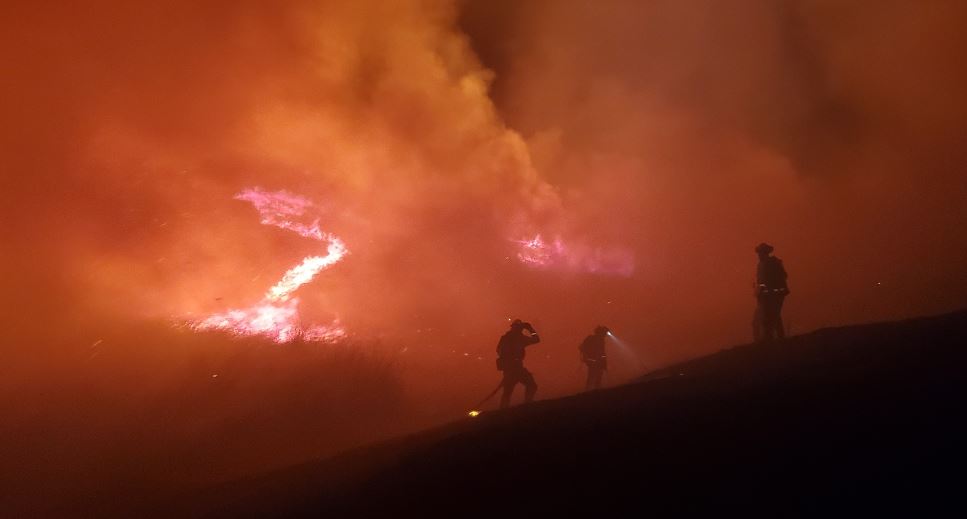 The entire Bay Area was under a Red Flag Warning and the energy release component was at 97 percent -- a condition ripe for an explosive wildfire. Winds had been clocked at 77 mph on Mt. St. Helena, 75 mph on Mt. Diablo and 32 mph on Mt. Tamalpais by dawn.

In all, 1.5 million people have had their power shut off in the San Francisco Bay Area, in wine country, in the agricultural Central Valley and in the Sierra Nevada foothills.

Utility officials claimed weather conditions had forced their hand after PG&E equipment was found at fault for several deadly wildfires stemming back to 2017. The company has gone into Chapter 11 bankruptcy to protect itself from millions of dollars in damage claims.

But the utility's explanation was falling short with many residents.

"It's just kind of scary. It feels worse than Y2K. We don't know how long," said Tianna Pasche of Oakland. "My two kids, their school situation keeps moving every second. It's not clear if we need to pack for a week and go out of town or what to do. So I'm just trying to make sure we have water, food, charging stations and gas."

There was widespread confusion and mixed messages Wednesday about any set times for the second phase of shutdowns, originally delayed until 8 p.m. in Contra Costa County, Alameda, Santa Clara and Santa Cruz counties. Until the shutoffs were delayed again to 10 p.m.

PG&E said the outage is still anticipated to last until Thursday at noon. The re-powering process will start at that point, so electricity will likely not be restored immediately, with some areas projected to be without power for days.

There was some good news. PG&E also announced that by reconfiguring its power system, it had restored electricity to 44,000 customers who weren't in areas of high fire risk, and it could bring back power to 60,000 to 80,000 customers in the Humboldt area, where gusty winds had subsided.

Also because of shifting forecasts, the utility said it was reducing the third phase of its blackout plan, set to begin Thursday, to only about 4,600 customers in Kern County — one-tenth of the original estimate.

Unsurprisingly, the unprecedented blackouts sparked anger. A customer threw eggs at a PG&E office in Oroville. A PG&E truck was hit by a bullet that shattered a window in Colusa County before Wednesday's outages, although authorities couldn't immediately say whether it was targeted. PG&E put up barricades around its San Francisco headquarters.

"We realize and understand the impact and the hardship" from the outages, said Sumeet Singh, head of PG&E's Community Wildfire Safety Program. But he urged people not to take it out on PG&E workers.

To sign up for PSPS alerts, visit Prepare For Power Down.