MORAGA (CBS SF) -- Residents of Moraga's Sanders Ranch neighborhood were forced to flee their homes early Thursday as a fast-moving wildfire burned through at least 40 acres and threatened structures in an area already darkened by the PG&E planned power outage, authorities said.

Contra Costa County Fire Protection District Fire Captain George Laing said the blaze broke out in the tinder-dry hills at 12:54 a.m. The fire had burned 40 acres and was 70 percent contained as of 5:40 a.m.

At 5:30 a.m. many of the evacuees were allowed to return home. Contra Costa County officials declared an all-clear around 6:30 a.m. 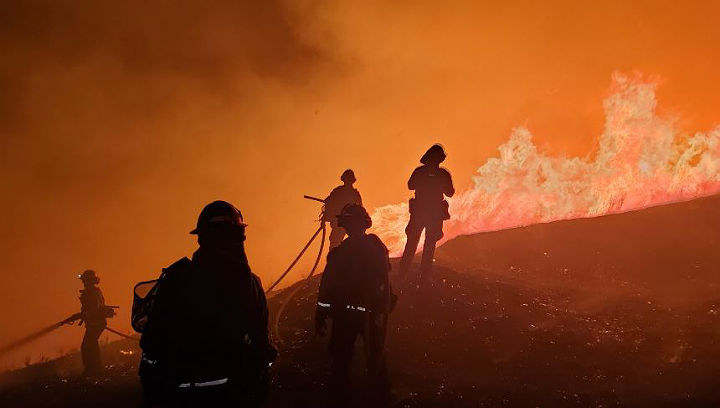 Overnight, firefighters battled the blaze in warm wind conditions and gained some progress. Winds in the hills were clocked at about 30 mph as the Bay Area is under a Red Flag Warning.

Evacuated residents from the 140 homes in the neighborhood told KPIX 5 that their power was turned off late Wednesday night as part of PG&E's massive wildfire prevention outage.

"I think it was more upsetting because the power was out already," said evacuee Melanie Bell. "I think it would have been much easier (to evacuate) if the power had been on. The power being out prevents fire, it doesn't make it much easier to deal with it when it happens."

Sydney Gottlieb said her neighbors alerted her to the fire.

"I heard a bunch of honking on my street," she said."I honestly thought I was dreaming and then one of my neighbors came and said we were evacuating to the church. Then there was this insanely large smell of smoke."

The fire was first reported near 46 Merrill Circle North and off Sanders Ranch Road. It was burning south of St. Mary's College but the university was not threatened.

The evacuees gathered at an evacuation center at the church, where power was out, forcing evacuees to huddle in the darkened church under candlelight before evacuations were lifted.

The cause of the fire will be determined later Thursday when investigators are able to access the scene.