Her mom, Sarah Murdough, thought asking the retailer to add a dragon patch, designated for boys, to the girl's pink and purple backpack would be a simple request. "How hard could it be to add a patch," Murdough asked.  However, after speaking with customer service representatives and a manager at Pottery Barn Kids, Murdough says she was told it "simply wasn't an option."

So Murdough took to Facebook to complain, writing on the Pottery Barn Kids Facebook page, "I can't tell you how disappointed I am in the gender stereotyping that is going on within your company." The comment received hundreds of likes and more than 50 comments and shares. 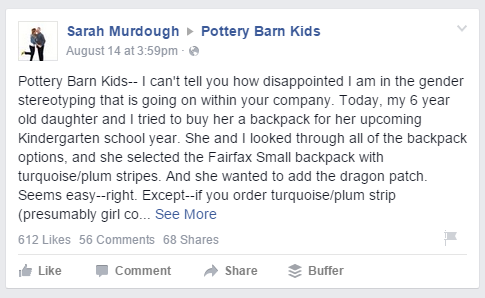 "I'm sure there is an operational issue that they have to deal with," explained consumer Psychologist Kit Yarrow after she heard about the ordeal.

"However difficult it is, it is not worth the consumer angst that they're going to have to deal with."

Yarrow says the retailer would be smart to change its policy because inclusiveness is more important to consumers than ever.  She says parents are increasingly opposed to forced gender stereotypes and points to target's recent decision to remove gender specific signs from its stores as an example of how retailers are being forced to respond.

When KPIX ConsumerWatch heard about Brady's story, Reporter Julie Watts also tried to order a girls backpack with a boys patch and was denied both in-store an online. Watts then contacted Pottery Barn Kids' media representatives and questioned the company's policy to refuse requests from children to get a "boy" patch on a "girl" backpack.

Within hours, Pottery Barn said it would contact Murdhough directly and the company agreed to change its policy regarding the patches stating, "This was important feedback, and we are making the adjustments now to ensure all patches can go on any colorway for the Fairfax collection." However, the retailer stopped short of saying it would change its gender-specific policies on all products.

Pottery Barn Kids also offered the little girl a free backpack with any patch she wanted.

NOTE: As of August 18th, customer service reps still refused to honor a request for a boy patch on a girl backpack. ConsumerWatch will continue to check back until the policy is officially changed.