Organized by a group called Utility Justice Campaign, the protesters linked arms inside metal tubing, stretched a banner saying "Unplug PG&E Not Us" across the street and chained themselves to the entry door into PG&E's headquarters.

The chanting started at about 7 a.m. as the activists blocked off traffic in front of PG&E's downtown headquarters.

"These large corporations get away with murder literally. And the only way to stop them is to show up," said protester Roman Rimar.

Activists also chained themselves to the doors of the building on Beale Street, essentially locking down the office.

They were speaking out on what they call PG&E's failure to update its infrastructure to reflect the changing climate in California, choosing to give shareholders profits instead.

Many of the protesters have mobility issues and said they were disproportionately affected by the planned power blackouts in peak fire season.

"I can't just take a go bag and go find a safe place to be," said activist Max Airborne. "It's not that easy."

"PG&E has billed the recent power outages as an inconvenience. That's not OK," said Jesica Lehman with the Power to Live Coalition. "This is not an inconvenience when your health and your life are at risk when the power goes off." 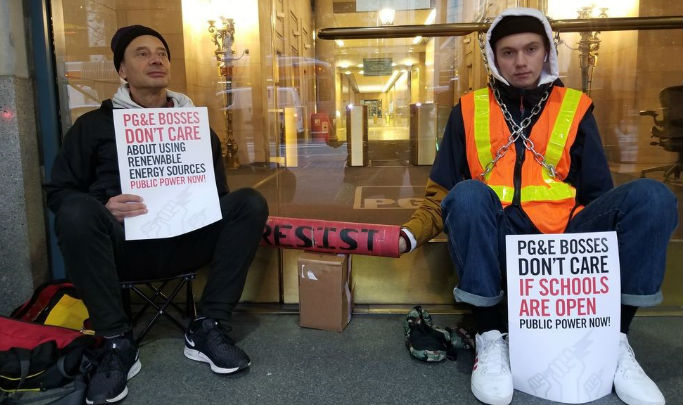 Protesters want the bankrupt utility to become publicly owned and be held responsible for the safety of its customers. PG&E equipment failure been linked to several Northern California wildfires that have destroyed thousands of homes and claimed several hundred lives.

Protesters began dispersing after 1 p.m. and the entrance to the utility's headquarters is no longer blocked. Before leaving, they made it clear they want a seat at the table when PG&E emerges from bankruptcy.

"When PG&E is restructured, he needs to put us up in front in that structure, in the governance, so we have a say in how public safety is determined when they do shutoffs - that we are consulted and are part of decision making," said Mari Rose Turac of the Utility Justice Campaign.

In a prepared statement, PG&E said measures had been taken limit the protest's impact on workers at the headquarters building.

"Our employees are hard at work today and focused on providing our customers with safe, reliable, clean and affordable energy; reaching a fair settlement with wildfire victims; and emerging from bankruptcy as the utility that our customers want and deserve," the company said. "We are taking the appropriate steps to limit disruption at our facilities, and to ensure the safety of those in the area."

"We understand and recognize the serious concerns raised by customers and wildfire victims and we acknowledge that while we have made progress, we have more work to do," the statement continued.

Protesters began dispersing after 1 p.m. and the entrance to the utility's headquarters is no longer blocked. Before leaving, they made it clear they want a seat at the table when PG&E emerges from bankruptcy.

"When PG&E is restructured, he needs to put us up in front in that structure, in the governance, so we have a say in how public safety is determined when they do shutoffs; that we are consulted and are part of decision making," said Mari Rose Turac of the Utility Justice Campaign.

Damage lawsuits filed in the wake of those fires drove the massive utility to seek Chapter 11 bankruptcy protection earlier this year. On Friday, Gov. Gavin Newsom rejected a $13.5 billion settlement that PG&E struck just last week with thousands of people who lost homes, businesses and family members in the devastating fires.

The decision was announced in a five-page letter to PG&E CEO William D. Johnson and marked a major setback in the utility's race to meet a June 30 deadline to emerge from bankruptcy protection.

The San Francisco-based company needs to pull a deal off to be able to draw from a special fund created by the Democratic governor and state lawmakers to help insulate utilities if their equipment sparks other catastrophic fires. The risks have escalated during the past few years amid dry, windy conditions that have become more severe in a changing climate. 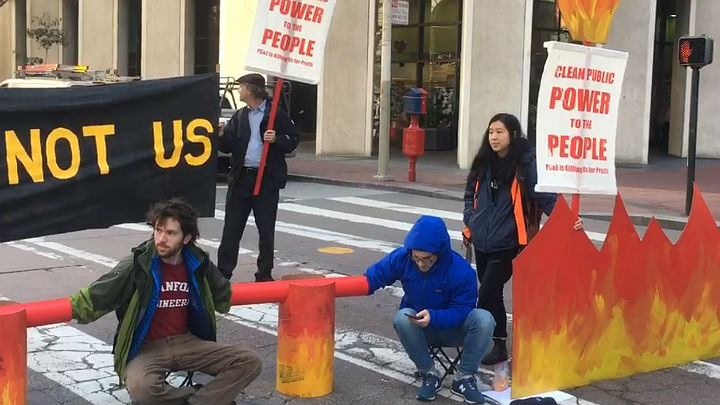 In his letter, Newsom said the proposed settlement announced last week does not achieve the goal of addressing what he considers its most important elements, providing safe and reliable power to PG&E customers.

"In my judgment, the amended plan and the restructuring transactions do not result in a reorganized company positioned to provide safe, reliable, and affordable service," he said.

He went on to say that PG&E's problems are the result of decades of mismanagement that must be addressed before he will sign off on any proposed settlement.

"PG&E's board of directors and management have a responsibility to immediately develop a feasible plan," the governor said. "Anything else is irresponsible, a breach of fiduciary duties, and a clear violation of the public trust."

"We all know that we can't trust PG&E to do the right thing or even follow the law," the Napa Democrat said. "Gov. Newsom has been standing up for the interests of ratepayers, victims and communities from day one."

Newsom played a pivotal role in prodding Pacific Gas & Electric to work out a settlement with the fire victims instead of sticking to its original plan to earmark about $7.5 billion for them.

That $7.5 billion became particularly galling to the governor and other critics after the company agreed to pay $11 billion to resolve a potential $20 billion liability with insurers. Those insurers had already paid their policyholder claims in the fires that killed more than 120 people and destroyed nearly 28,000 homes and other buildings during 2017 and 2018.

The proposed settlement agreed to last week by the utility and attorneys representing fire victims would have paid $6.75 billion to the victims in installments ending in early 2022, and $6.75 billion in company stock that would give them close to a 21% stake in the reorganized PG&E.

The settlement also required significant concessions from the victims. Their lawyers had been contending victims were owed at least $36 billion and were likely to seek even larger amounts had they pursued their claims in a state trial and federal court hearing that had been scheduled for early next year.

Andria Borba contributed to this story.