SAN FRANCISCO (KCBS)— San Francisco drivers have long been frustrated spending countless minutes trying to find a parking space, but a new app called 'Monkey Parking' allows drivers to buy a spot from someone who's already in it.

On Chestnut Street in the Marina, you need a lot more than parking karma to find a spot. One woman driving around said it's a desperate situation and that drivers do what they have to do.

So here's how it works the driver of a car, already parked in a busy neighborhood, connects with someone using the app who is in that dire situation of needed a parking spot. The one searching for a spot shows up and pays up to $20 to take over their location.

Some said this would lead to parking-space squatters. Others said 'bring it on'. One mom said she'd use Monkey Parking because with her kids, sometimes you need to be able to pop in and out of a space. 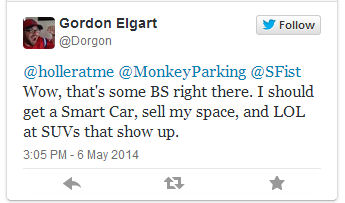 According to the city, there's half a million parking spots for a city of 750,000 people then the tens of thousands of visitors each day need to be factored in making for one hairy situation.

Others thought the $20 price tag would be a bit of a stretch considering that's what drivers pay for parking at a football game, arguing that $10 sounded more reasonable.

The City of San Francisco isn't sure if it's a good idea or even legal. The City Attorney's Office told the San Francisco Chronicle it is investigating whether MonkeyParking's business model of making a profit off public space is legal.