CAMPBELL (CBS SF) -- Fire officials in the South Bay were keeping an eye on a Tesla Model S that caught on fire in Los Gatos Tuesday afternoon and then reignited hours later as fire crews were moving the vehicle.

The second fire happened at around 10:30 p.m. Tuesday evening, when the Tesla was being towed to a yard in Campbell. Crews thought the Tesla's battery pack had cooled sufficiently to move it after the initial fire, but the car reignited again during the move. Fire crews quickly responded and took additional care as they tried to put out the new flames.

The tow yard is located at Camden Avenue in Campbell. Officials said the cause of the second fire was battery-related.

Tuesday afternoon, shortly after 2 p.m., a truck from the Santa Clara County Fire Department was dispatched to the shop on the 500 block of University Avenue between Roberts Road and Andrews Street after a report of a vehicle fire at a local business in Los Gatos. 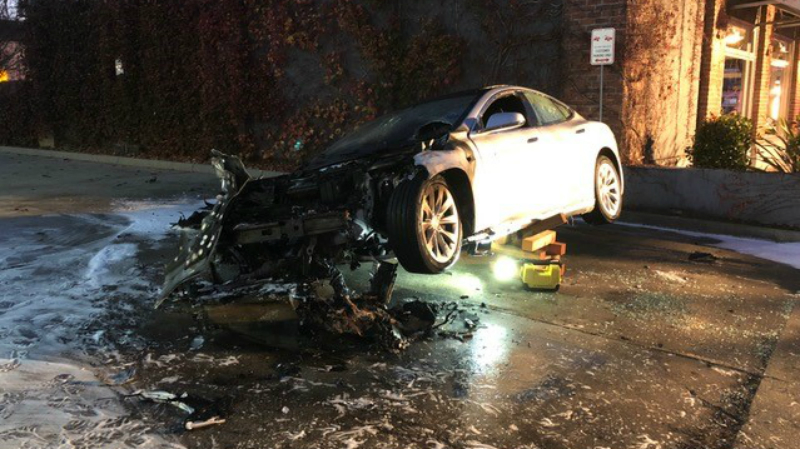 Upon arrival, fire crews found a Tesla Model S on fire at the business, a tire repair garage. The fire was quickly put out without spreading
or causing any damage to the building.

Fire officials said the Tesla had been brought to the shop after the owner had a flat tire while driving on nearby state Highway 17. The fire was noticed and reported by employees at the shop about five to ten minutes after the tow truck had dropped the vehicle off.

In the end, the front of the car completely burned away by the flames. The owner explained to KPIX 5 what he heard from the parking lot.

"I heard a strange hissing sound. I came out and there was smoke everywhere. So the shop immediately called the fire department," said the owner, who gave his name as Chris. "And by the time they got here, the car was already on fire."

Santa Clara Fire crews planned to remain on scene to make sure the vehicle cools and is safe to tow to a different location as the investigation into the fire continues.. There were no injuries to firefighters or bystanders.

The big question that remains is how the fire started. A Tesla spokesperson told KPIX 5, "We are currently investigating the matter and are in touch with local first responders. We are glad to hear that everyone is safe."

Tesla did not send any representatives to the fire scene in Los Gatos.

"If this car had been in my house today and we go on vacation or something and the car suddenly catches fire, the whole house can burn down. So, I'm certainly worried. My wife doesn't want me to own another Tesla," the owner said.

There have been reports of other Tesla fires in the Bay Area. Most of those happened after the vehicles involved crashed.