OAKLAND (CBS SF) -- Hours of violence that followed a peaceful demonstration demanding justice for George Floyd has left at least 18 people in custody early Saturday, six Oakland police officers recovering from their injuries and a downtown Walgreen and CVS pharmacy in shambles after they were looted.

A fatal shooting at the large Oakland federal office complex which includes the federal courthouse remained under investigation. One federal security officer died in the shooting and a second was wounded.

In an email to KPIX 5 Saturday, Oakland police spokeswoman Johnna Watson said it was still to be determined if it was related to the outbreak of violence on the nearby streets.

"Still under investigation, unknown if related," she emailed.

After marching peacefully through the streets of Oakland earlier Friday evening, a protest turned disruptive and destructive as activists took their demonstration against the in-custody police death of Floyd onto the I-880 freeway before lighting fires and looting downtown. 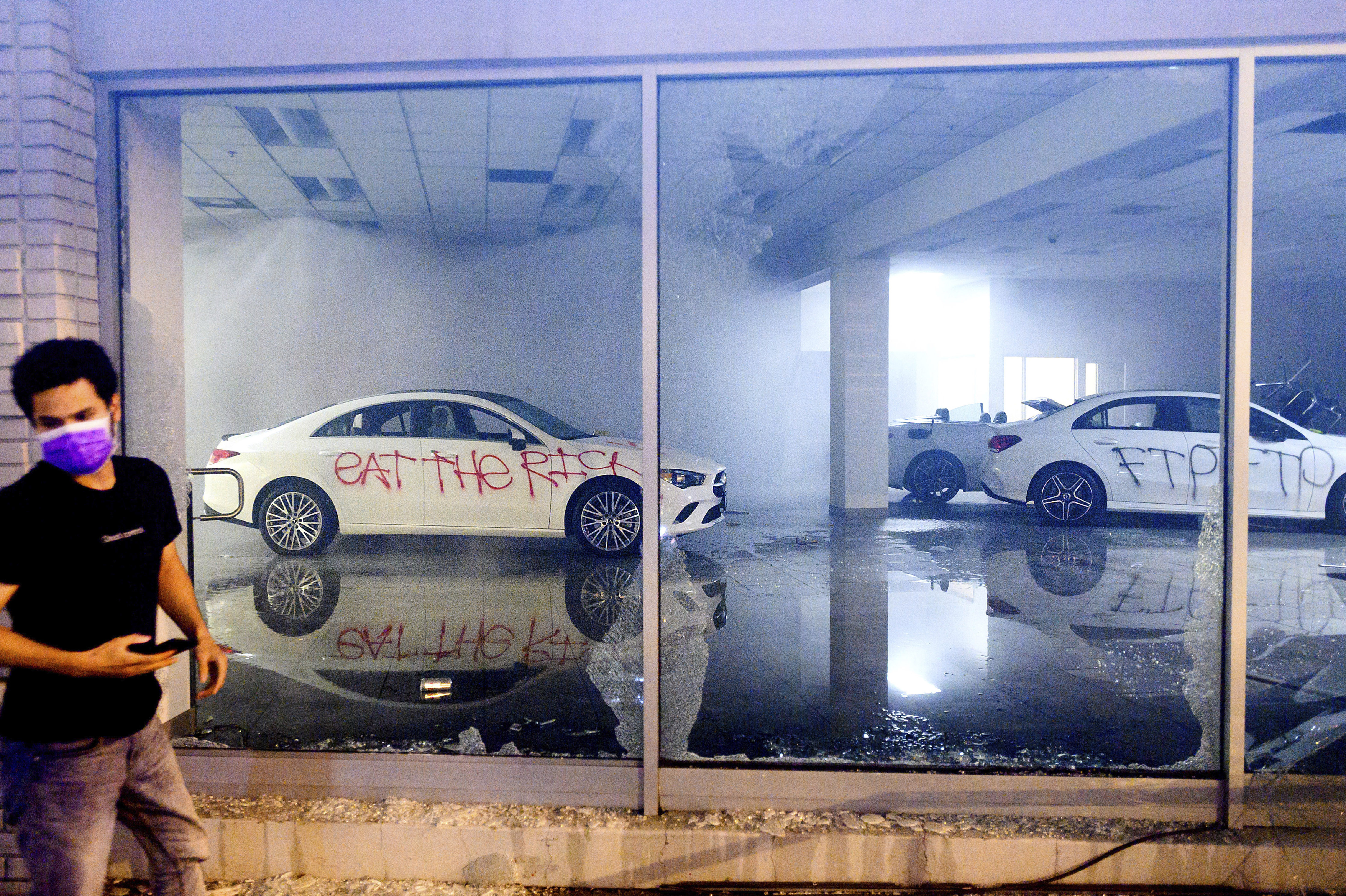 Vandalized cars sit in a Mercedes-Benz of Oakland showroom during in Oakland, Calif., on Saturday, May 30, 2020, during protests against the Monday death of George Floyd, a handcuffed black man in police custody in Minneapolis. (AP Photo/Noah Berger)

During the earlier march through downtown Oakland at around 7 p.m., sign-carrying protesters were loud but peaceful as they traveled down Broadway in a group estimated at about 200-300 people.

It was a later, much larger gathering at Frank Ogawa Plaza that led to the freeway takeover. After marching by nearby Oakland Police Department headquarters, the large group of protesters made their way onto the freeway at Webster Street on-ramp and off-ramp.

Chopper video above the scene revealed a heavy law enforcement presence on both sides of the freeway as the group spread out onto the freeway shortly before 9 p.m.

Video showed hundreds of protesters on the busy freeway. The group blocked traffic for a half hour or so before moving back to city streets. There were no reports of injuries, even after protesters were seen darting between vehicles in traffic. 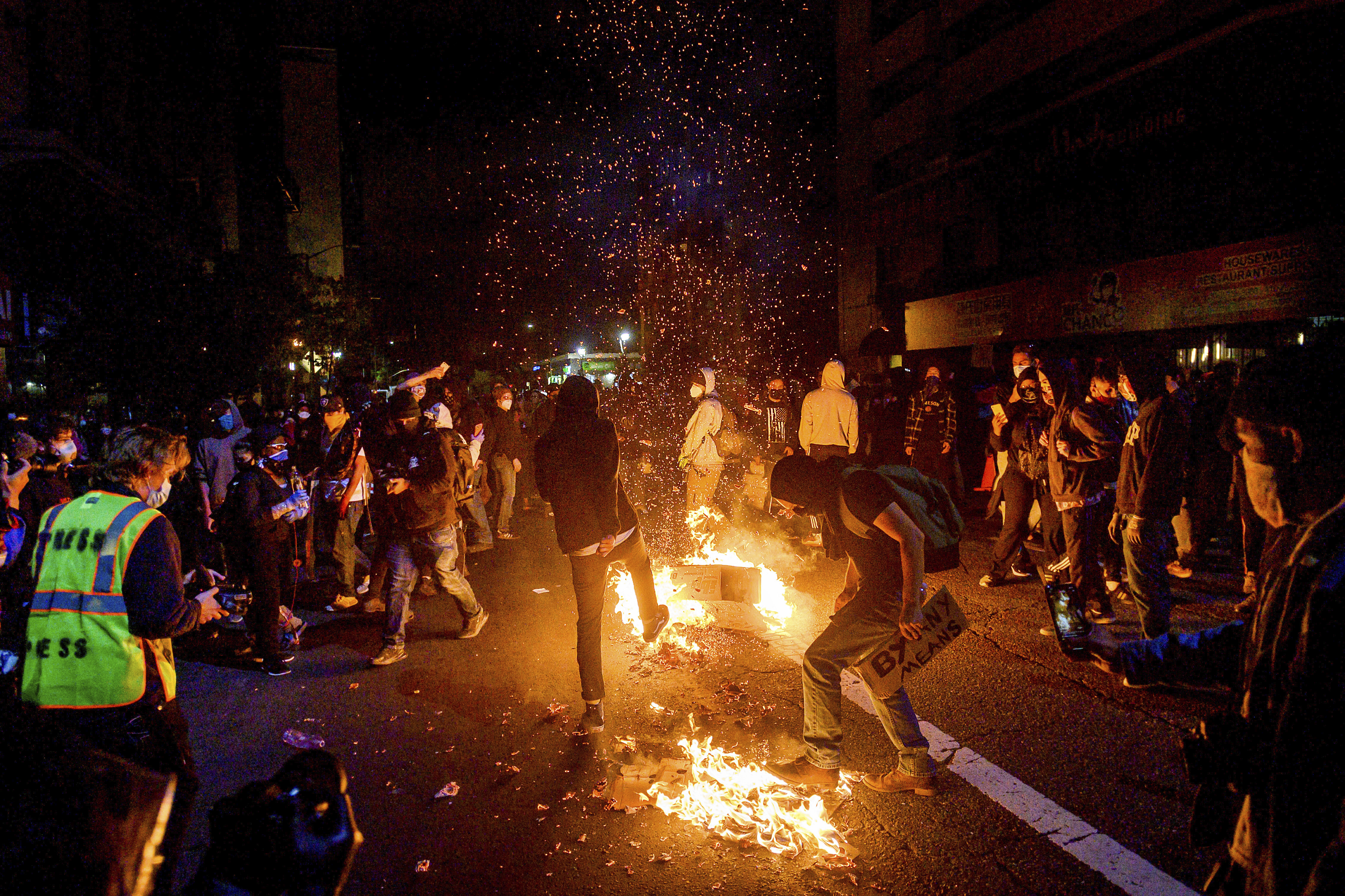 Demonstrators burn garbage in Oakland, Calif., on Friday, May 29, 2020, while protesting the Monday death of George Floyd, a handcuffed black man in police custody in Minneapolis. (AP Photo/Noah Berger)

Oakland police have also reported large groups of protesters in the area between the 700 and 1400 block of Broadway. Shortly before 10 p.m., police said that a large area was still congregating near 14th Street and Broadway.

Police confirmed that multiple officers had been injured by thrown projectiles. As of about 9:45 p.m., the demonstration had been declared an unlawful assembly.

Residents were being told to avoid the area as the protests continue. Video showed police using tear gas and flash-bang grenades as they tried to get the crowds to disperse. Protesters were also seen lighting off fireworks. 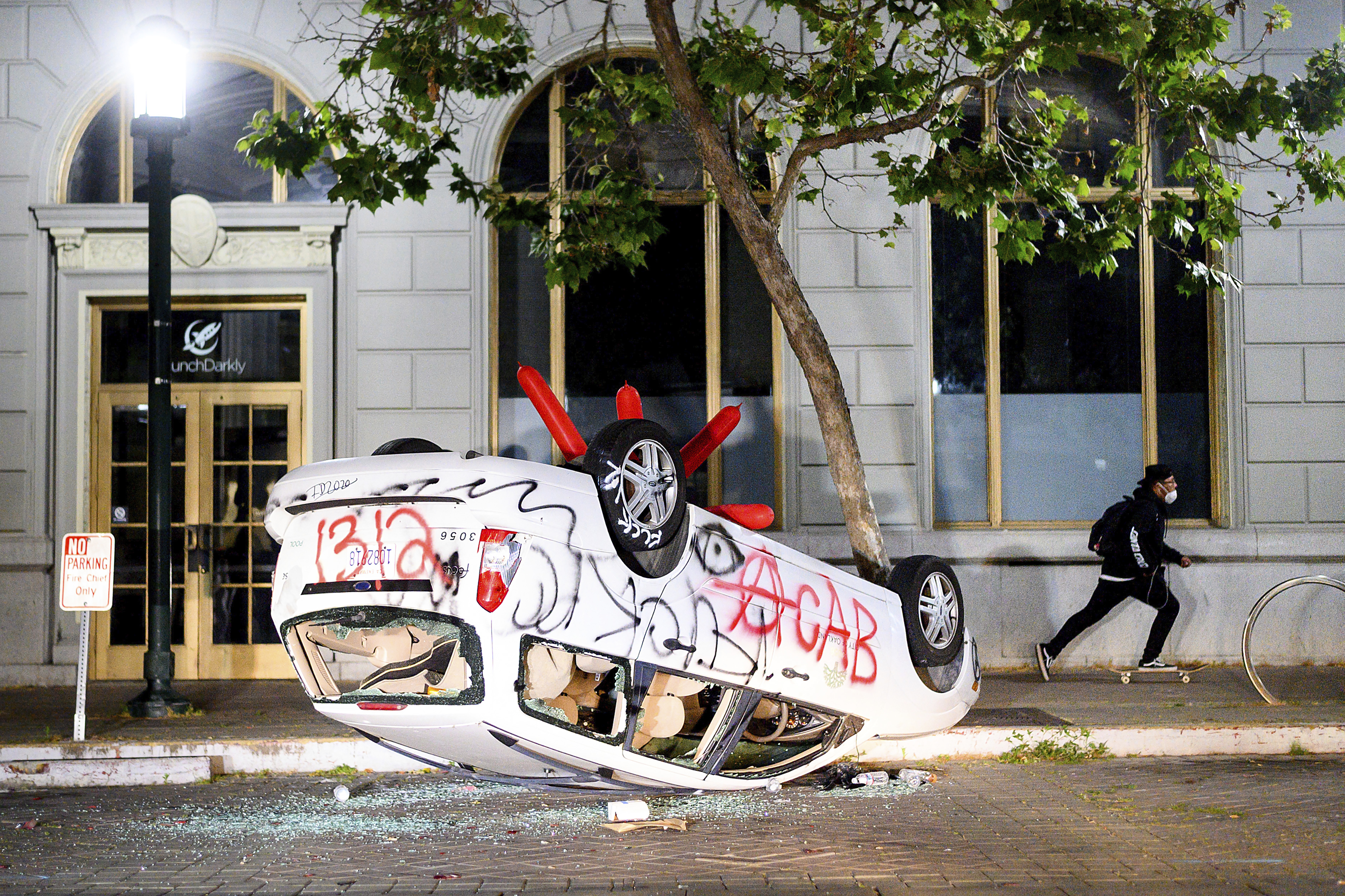 A damaged vehicle sits on its roof during a demonstration in Oakland, Calif., on Saturday, May 30, 2020, against the Monday death of George Floyd, a handcuffed black man in police custody in Minneapolis. (AP Photo/Noah Berger)

A Walgreens store was broken into and looted. A fire was later lit in the store, one of several garbage can and Dumpster fires that were lit along Broadway. A CVS pharmacy also was looted.

Windows were also broken at a Chase Bank on Broadway. Though plywood had been nailed over the windows earlier, protesters ripped down the wood, smashing windows and vandalizing the building before starting a fire inside.

A Mercedes-Benz dealership also appeared to have been heavily damaged from a fire, as were a number of other offices and business spaces in downtown Oakland. A Honda dealership on Broadway near the MacArthur Freeway and a Target store at Broadway and 27th also sustained significant damage.

BART has closed its 12th Street Oakland City Center station, with trains going through the station without stopping, amid the protest. Alameda-Contra Costa Transit officials said their buses are not stopping on Broadway in downtown Oakland due to the demonstration.

The freeway protest in Oakland came after earlier protest activity on the Bay Bridge slowed traffic for the better part of an hour starting at around 7 p.m. Friday afternoon, a group of protesters in San Jose took over a section of US Highway 101, blocking traffic for about an hour before moving back to city streets.