OAKLAND (KPIX 5) -- A vigil was held in Oakland on Sunday as mourners gathered to remember the Oakland man who was killed on New Year's Eve--his birthday--while trying to stop the thieves who stole his laptop from a Starbucks.

Hundreds of friends, coworkers and family members came out to the Starbucks in Oakland's Montclair neighborhood to honor the memory of Shuo Zeng, who they remembered as a brilliant scientist and a caring friend.

On his 34th birthday, Zeng was working on his laptop inside the coffee shop when police say two men, Byron Reed and Javon Lee, stole the computer.

Zeng chased them outside, where he was fatally struck by the suspects' getaway vehicle. He died from his wounds at the hospital hours afterward. Surveillance cameras in the nearby area helped detectives catch the two suspects.

Reed and Lee, both convicted felons, were arrested on Tuesday and face charges of murder and manslaughter. 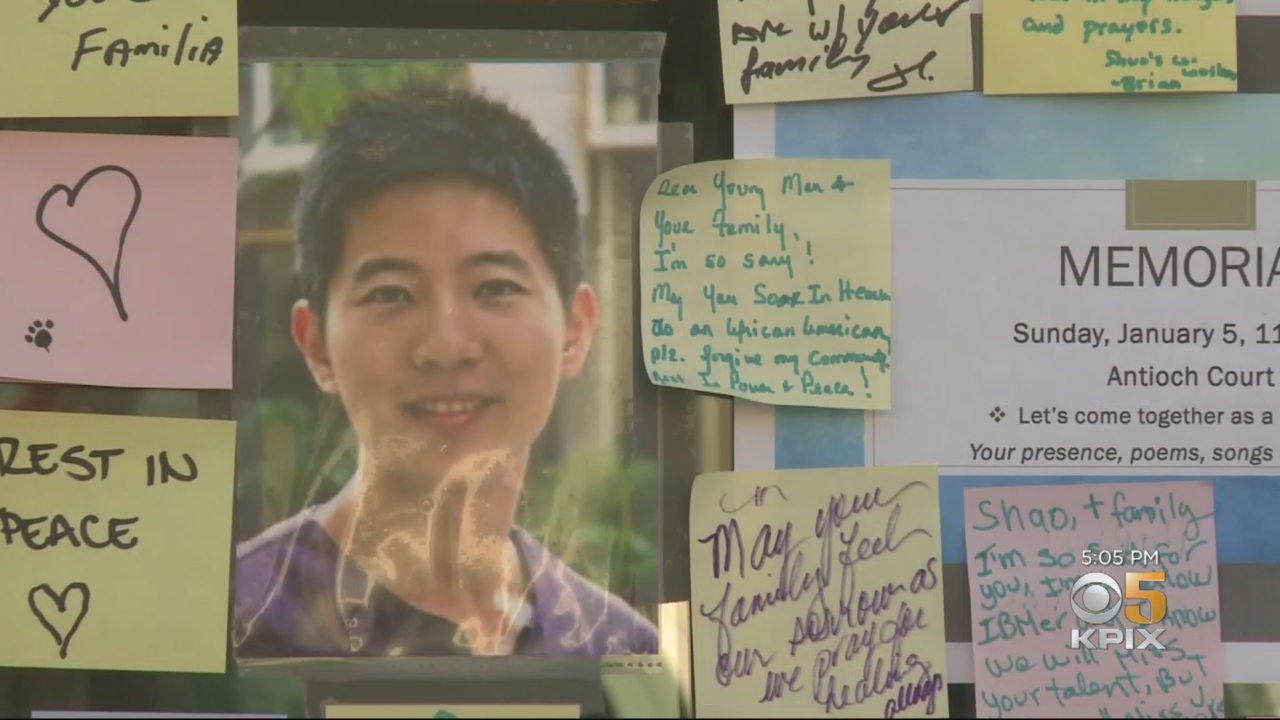 Zeng's colleages say he was one of the Bay Area's brightest, an outstanding researcher with two doctorate degrees in philosophy and physics. Serban Simu, co-founder of Aspera in Emeryville, hired Zeng and sat next to him every day.

Michelle Munson, co-founder and former CEO of Aspera, comforted Zeng's family, who just flew in from China, and told them her dear friend made important contributions in numerical physics and machine learning.

"He was a person who was kind and respected by everyone who knew him and worked with him. And he made a habit of being honorable in every part of his life," she said.

Jessie is one of Zeng's cousins who was raised together with him and said the two were close like siblings. "He's my only brother. I know that he was beloved by so many people. I really appreciate everyone who had come today. Thank you so much. I think he would be really happy," Jessie said through tears.

Oakland councilmember Sheng Thao attended Sunday's vigil and is pushing to more clearly define deployment rules for when "walking officers" who are assigned to foot patrols in neighborhoods are pulled off their beats to provide backup in higher priority calls.

"For example, if there is a shooting in other parts of Oakland, yes, officers need to go to that. That's an emergency. However, we shouldn't allow for one area to be unattended or not have a public safety patrol," Thao said.

Thao will introduce and debate the proposal in the rules committee and then the public safety committee. If it advances, the proposal could go before the full city council as early as February or early spring.

A community meeting will be held about the incident at 7 p.m. on Jan. 9 at Montclair Presbyterian Church at 5701 Thornhill Drive in Oakland.