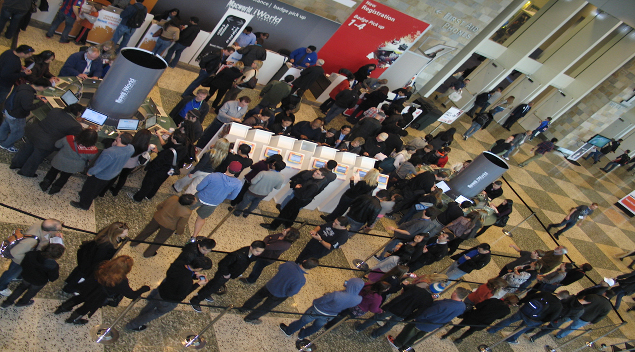 America's biggest and most important technology show already ended its run in Las Vegas, but plenty of other prominent events worth attending are still to come. The massive Consumer Electronics Show (CES) entrance is mostly limited to individuals associated with the tech industry, as are other high-profile events like Apple's World Wide Developers Conference and Google's I/O, both in San Francisco. But several others are open to the public, allowing consumers the pleasure of viewing many of today's cutting-edge products before they're released. The following are five must-see tech conventions for 2014, most of which are open to the public.

The burgeoning crowds of loyal fans have dwindled since Apple last participated at MacWorld San Francisco in 2009, but this year's event may prove to be one of the most successful in recent memory. Originally held earlier in the year, MacWorld/iWorld 2014 is moving to March and to the larger, more cavernous Moscone North, a vast improvement from Moscone West, where the event moved after Apple's last appearance. While longtime Mac fans may yearn to return to the glory days when Steve Jobs took the stage to unveil the latest innovations such as the iPhone, iTunes and the iMac, last year's event still had star power, with special appearances by Black Eyed Peas frontman Will.i.am and actors Ashton Kutcher and Josh Gad, who were on hand to talk about their upcoming movie "Jobs." The crowds may be smaller, but MacWorld/iWorld remains the most important event for Apple fans.

Also known as SXSW, this popular event in the capital of Texas is part music festival, interactive conference, film festival and trade show and expects to grow even larger this year. Last year's event drew an estimated 65,000 attendees to the trade show and 57,000 to the music festival. Among the more than 2,220 acts who performed at various venues throughout Austin were music icon Prince, the hip hop band A Tribe Called Quest, the Flaming Lips, Iggy and the Stooges and a keynote speech by the Foo Fighters' Dave Grohl. This year's list of bands include the legendary British rock band The Zombies, led by Rod Argent, that released a number of international hits during the 60s, such as "Time of the Season," "Tell Her No" and "She's Not There." Among the trade shows at SXSW, one of the most highly anticipated is the free Gaming Expo at the Palmer Events Center.

The 14th International Cloud Expo returns to New York and sponsors expect to have its largest attendance ever. Although the Cloud Expo is far smaller than San Francisco's Dreamforce extravaganza, it remains one of the more visible technology conferences in a city better known for Wall Street. The Silicon Valley version known as Cloud Expo West was held in November in Santa Clara, and despite attendance figures of less than 10,000, the cloud computing industry experienced significant growth in 2013, with reported growth rates for cloud vendors of an astounding 90% per year. In October, the Javits Center hosts another prominent trade show, the New York Business Expo, billed as the Northeast's largest BtoB trade show.

Billed as the world's premier trade show for computer and video games and related products, E3 has consistently drawn tens of thousands of attendees and exhibitors. One drawback to attending this event is, like the Computer Electronics Show in Las Vegas, it's an industry-only event. In other words, all attendees much have a direct and current professional affiliation with the video game industry. But for those who are able to attend, the event offers the unique opportunity to view the latest must-have video games in advance of public release. Among the top-selling games featured at last year's event were Call of Duty: Ghosts, Halo 5, Just Dance 2014, Madden 25 and The Last of Us. In addition, many of the most recognized video developers appeared last year, including Electronics Arts, Disney Interactive, Dreamworks Animation, Microsoft, Nintendo of America and Sony.

With more than 130,000 registered attendees, Dreamforce, hosted by the global cloud computing company Salesforce and CEO Marc Benioff, has become one of the biggest and most important tech events of the year. Featuring more than 1,400 breakout sessions, 350+ partners showcased in the enormous Cloud Expo, new keynote speakers and a special guest band to appear at the Dreamforce Gala, this year's event may even eclipse last year's staggering attendance figures. This year's list of distinguished speakers won't be announced for months but last year's event included Benioff, Yahoo CEO Marissa Mayer, Facebook COO Sheryl Sandberg and Dr. Deepak Chopra, in addition to special performances by the Bay Area's popular punk rock band Green Day and the new New Wave rock band and Rock and Roll Hall of Fame inductees, Blondie.

Related: Ask An Expert: Tips For Traveling Alone
Randy Yagi is a freelance writer covering all things San Francisco. In 2012, he was awarded a Media Fellowship from Stanford University. His work can be found on Examiner.com Examiner.com.