SAN FRANCISCO (CBS SF) — Opening statements began Monday in the trial of an illegal immigrant who set off a national debate over the legality of Sanctuary Cities after he shot and killed a woman on a popular San Francisco pier.

Outside the courtroom, former San Francisco Supervisor Matt Gonzalez, who is representing defendant Jose Ines Garcia Zarate, told reporters a grainy video was pivotal to his defense in the fatal shooting of Kate Steinle.

Gonzalez claims and will tell the jury that the shooting was accidental.

"There is video from about a quarter of a mile away -- it's not outstanding, it's very grainy," he said. "You do see the key facts that occur. We are very pleased that there is video because otherwise some of the things that police were able to get Mr. Garcia Zarate to say, we would not be able to prove were not true."

"For instance, that he was five feet away when Ms. Steinle was shot. We know he was 90 feet away. Or when the police ask him why he walked by her as she was on the pier injured, we now know that did not happen."

An overflow crowd filled the Superior Court courtroom as the eyes of the nation were focused on the trial. Zarate, dressed in a striped shirt at the defense table, wore headphones so he could hear the proceedings in Spanish.

Prosecutor Diana Garcia showed the jury the gun that killed Steinle in her opening statement and said she was shot on purpose. 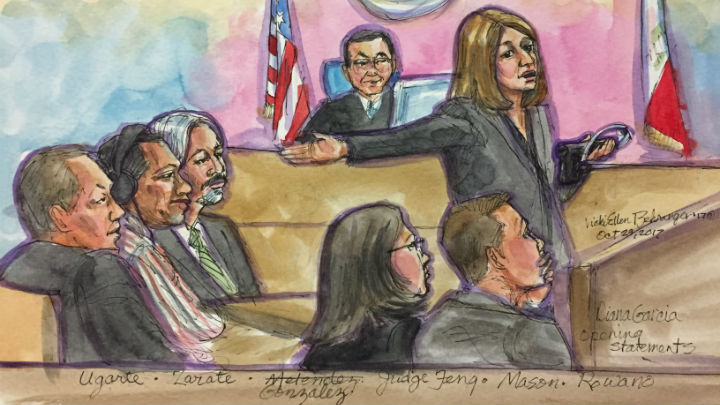 Garcia also told the jury Monday that a ballistics expert will testify that the gun would not have gone off accidentally, as the suspect has claimed.

"He knew he had a gun, he meant to conceal it, he meant to shoot people on Pier 14 and he ended up killing Kate Steinle," Garcia said.

Garcia argued that the ricochet could have occurred because Garcia Zarate was aiming at Steinle or other people in the area but fired before the barrel was all the way up and in position.

A jury of six men and six women will determine Zarate's fate. Among the 12 jurors were three legal immigrants. 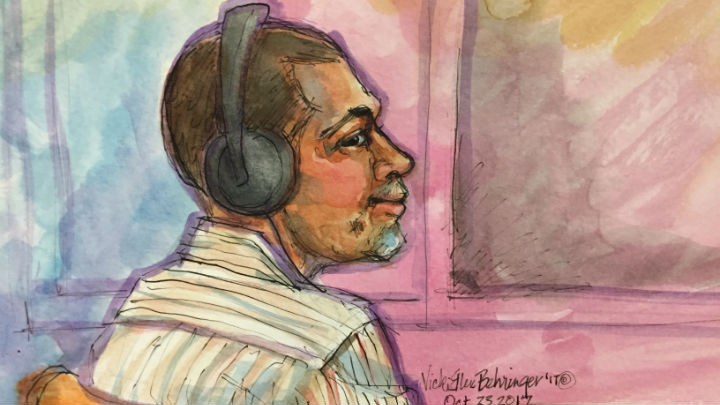 The 54-year-old acknowledges shooting Steinle in the back while she was walking with her father on the downtown pier July 1, 2015, but he claims the shooting was accidental.

Zarate said he was handling a handgun he found wrapped in a T-shirt under a bench on the pier when it accidentally fired. The handgun belonged to a Bureau of Land Management ranger who reported that it was stolen from his parked car in San Francisco a week before Steinle was shot.

"If he didn't know that the object he touched (the t-shirt) had a gun in it, then he does not bear criminal responsibility," Gonzalez contended.

The San Francisco district attorney's office has charged Zarate with second-degree murder, which could result in a maximum sentence of 15 years to life in prison. Assistant District Attorney Diana Garcia declined to comment.

Gonzalez said last week that his client didn't realize the bundle he picked up contained a firearm, and it went off as he unwrapped the T-shirt.

"He didn't know it was a gun when it fired," Gonzalez said. "It all happens in a span of three seconds."

The suspect originally went by the name Juan Francisco Lopez-Sanchez when he was arrested. But Gonzalez said he now prefers to be called by his birth name of Zarate.

Zarate had been deported five times and was homeless in San Francisco when he shot Steinle. He had recently completed a prison sentence for illegal re-entry when he was transferred to the San Francisco County jail to face a 20-year-old marijuana charge.

Prosecutors dropped that charge, and the San Francisco sheriff released Zarate from jail despite a federal immigration request to detain him for at least two more days for deportation. The sheriff's department said it was following the city's sanctuary policy of limited cooperation with federal immigration authorities.

The shooting touched off a political furor during the presidential campaign, with President Donald Trump referring to Steinle's death in his campaign as a reason to toughen U.S. immigration policies.

None of that is at issue during the trial, and the judge has barred mention of the politics of immigration and gun control during the proceedings.

TM and © Copyright 2017 CBS Radio Inc. and its relevant subsidiaries. CBS RADIO and EYE Logo TM and Copyright 2017 CBS Broadcasting Inc. Used under license. All Rights Reserved. This material may not be published, broadcast, rewritten. The Associated Press contributed to this report.