(CBS SF) -- Election Day isn't for another month, but election season starts Monday as ballots are mailed out to millions of voters.

California's history of mail ballot voting goes all the way back to 1863 when a number of Californians were out of the state fighting in the Civil War. So Governor Leland Stanford signed a law allowing Californians to vote by mail. 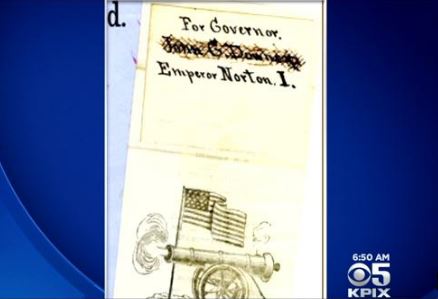 Above is a relic from the first mail ballot election. A soldier - a Californian - who was in Virginia fighting with the Union on election day cast his vote for Governor and wrote in Emperor Norton I - beloved Bay Area eccentric.

Since then, several laws have been passed to make mail ballot voting available to everyone. According to the California Secretary of State, in the June primary this year, 69 percent of the total votes cast were mail ballot votes -- a phenomenal percentage.

At some point Election Day becomes a deadline for mail ballots day. But a recent study by UC Davis showed that young people and people of color are more likely to vote on Election Day, so its unlikely that we would move to an all mail ballot anytime soon.

While Election Day is here to stay, one downside to mail ballots is that they really muck up Election night. Its takes days to count them all so close races can't be called on Election night. Remember that in the June primary, it took a week before we knew whether Betty Yee or John Perez would be moving forward in the State Controller's race.

This affects candidates and campaigns because instead of one Election Day, there are 30. As one consultant told me: instead of a Macy's One Day Sale, you have a Macy's 30 Day Sale! Some politicians love it because the get a lot of time to convince people to vote for their candidate or cause. But this is expensive, so campaigns have to have raise a lot of funds and it has to be done early. Also, it allows campaigns to change their message mid-stream. For example, people over 55 vote earlier, so campaigns target them early and closer to election day, run ads targeting younger voters who tend to wait.

Earlier this year, the California Voter project released a study showing that thousands of mail ballots go uncounted each year owing to voter mistakes. Here is how to avoid the most common mistakes: