SAN FRANCISCO (CBS/AP) -- For nearly two hours on May 19, 2011, Joann Davis stood in the parking lot of a California Denny's restaurant in pants soaked in urine answering questions from a federal agent about a rice-sized piece of moon rock she wanted to sell to help pay for her son's medical care.

Davis, who was in her 70s, had contacted NASA about the rock and claimed it was a gift to her late husband from astronaut Neil Armstrong. But lunar material gathered on the Apollo missions is considered government property, and her email prompted an investigation that brought six armed officers to the Denny's that day to seize the rock.

Conley detained Davis even though he knew she was nearly 75 years old, had urinated in her pants during the sting, had reached out to NASA herself and was having financial problems, a three-judge panel of the 9th U.S. Circuit Court of Appeals said.

Instead of telling Davis that her possession of the paperweight was illegal and asking her to surrender it to NASA, Conley "organized a sting operation involving six armed officers to forcibly seize a lucite paperweight containing a moon rock the size of a rice grain from an elderly grandmother," 9th Circuit Chief Judge Sidney Thomas wrote.

John Rubiner, an attorney for Conley, said he was examining the ruling and had not decided what to do next. He said a lower court judge, Consuelo Marshall in Los Angeles, determined that Conley had asked Davis if she wished to use the bathroom to clean up and whether she wanted to speak with him at her home, but she declined.

Marshall also said there was no evidence that Davis or her husband legally acquired or possessed the moon rock. Marshall said Davis told a confidential informant retained by NASA that she knew of other people who had gotten in trouble for possessing lunar rock, according to court documents. Davis sought $1.7 million for the rock. 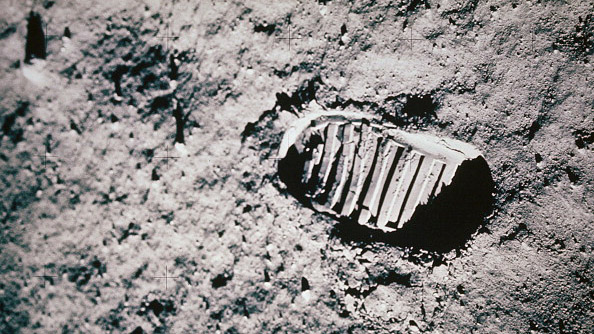 In addition to the moon rock, Davis claimed she had a nickel-sized piece of the heat shield that protected the Apollo 11 space capsule as it returned to earth from the first successful manned mission to the moon in 1969. Investigators did not seek to seize that item.

NASA lunar experts later confirmed the authenticity of the moon rock in Davis' possession, but prosecutors never filed charges against her, the 9th Circuit said. Armstrong, who died in 2012, had told investigators that he never gave or sold lunar material to anyone, according to an affidavit in the case.

© Copyright 2017 The Associated Press. All Rights Reserved. This material may not be published, broadcast, rewritten or redistributed