San Francisco fire department spokesman Jonathan Baxter said a firefighter who sustained a hand injury while battling the blaze is in stable condition. No other injuries were reported.

The firefighters began responding to 911 calls of a fire on the waterfront at Taylor and Jones streets around 4:15 a.m. Arriving crews were confronted with towering flames engulfing building, forcing them to take a defensive stance.

The fire tore through Shed C, near the north end of the concrete Pier 45, causing its walls to collapse, Baxter said. The flames singed the first fire truck to respond to the scene, forcing firefighters to turn their hoses on the vehicle to save it, he added.

"The flames were huge, shooting out of the roof! I mean it was big and it was hot," said Mitch Gronner, owner of Aloha Seafood.

The structure was being used primarily for storage for fish-processing equipment and held a few offices, including for the Red & White Fleet of sightseeing boats.

Shortly after firefighters arrived, San Francisco's Fireboat 3 came on the scene, battling the blaze next to the O'Brien but fire had spread underneath the pier. 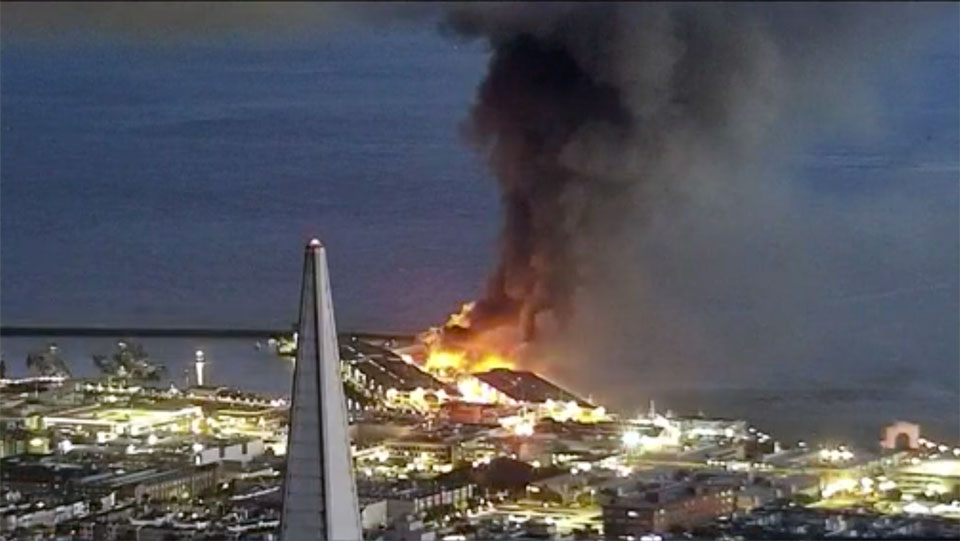 Baxter said the fireboat crew saved the historic liberty ship that participated in the Allies invasion of Normandy on D-Day in 1944.

"When firefighters arrived, the flames were literally lapping over the Jeremiah O'Brien," he said. "They literally saved the O'Brien."

"The Jeremiah O'Brien has been known as the lucky ship," said ship captain Cevan Lesieur. "She survived the North Atlantic and D-Day and that's the first reaction -- it's a miracle!"

Crews were also able to prevent the blaze from spreading to the USS Pampanito, which is also docked at the pier.

By 2 p.m., the fire was under control, fire officials said. Streets around the Fisherman's Wharf neighborhood were closed off.

Baxter said rescue crews searched the smoldering remains as best they could to make sure there were no victims of the blaze.

He said at the height of the battle with the flames there were 130 firefighters and 50 apparatus on the scene. The Coast Guard was on the scene helping to police the waters.

Building inspectors will determine how badly the pier has been damaged.

Musée Mécanique, a popular interactive museum housing 20th-century penny arcade games and artifacts at the south end of the pier was not damaged.

The fire could be seen for miles. A large plume of smoke covered much of the San Francisco Bay, stretching from Sausalito to Oakland. Several residents have reported on social media being able to smell the smoke.

Fishing companies that have been operating out of Pier 45 said the fire exacerbated an already tough business climate caused by the pandemic.

Kenny Belov, owner of the seafood wholesaler TwoXSea, told the Chronicle his building near the warehouse was not damaged but he worried a power outage on the pier could ruin the fish in his freezer.

"Not that it would ever need this but the seafood industry didn't need this now," Belov said. "It's surreal. We've obviously had a tough go the last couple months, with restaurants (closed) ... Of all the problems in the world, this is not a big one but it's frustrating."

Fire crews plan to monitor for hot spots through the evening. Motorists and boaters are advised to avoid the area.

The cause of the fire is under investigation. Workers at nearby buildings told KPIX that homeless people often sleep in the warehouse.

"It could've been some homeless folks being careless with, you know, making their breakfast," Gronner said.

© Copyright 2020 CBS Broadcasting Inc. All Rights Reserved. This material may not be published, broadcast, rewritten, or redistributed. Bay City News and the Associated Press contributed to this report