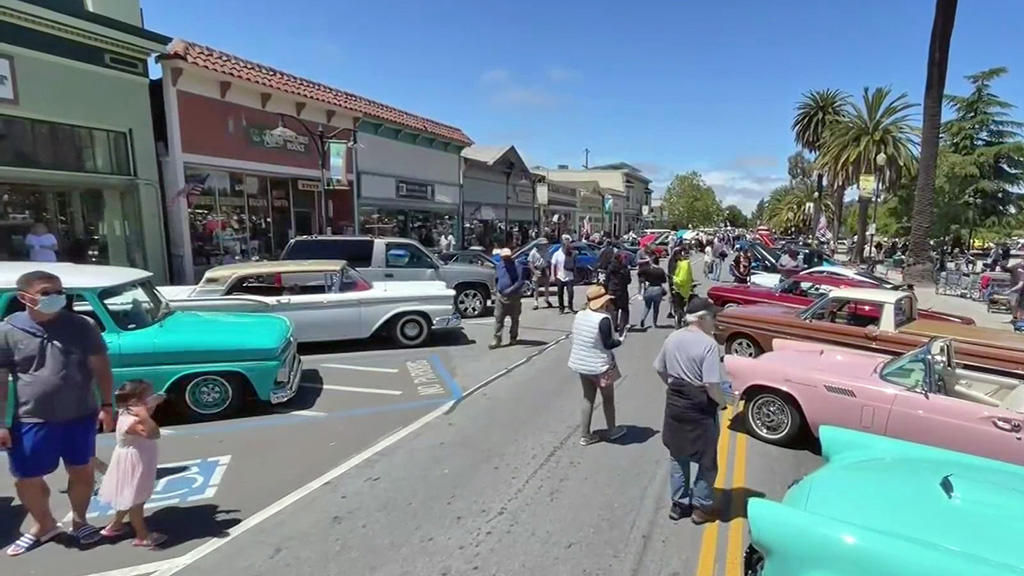 NILES (KPIX) -- The Bay Area currently has the highest COVID-19 positivity rate in the state and, on Friday, the health officers of all nine counties urged people to begin wearing masks again indoors or at large gatherings. Out on the streets, it seems many people are making their own decisions this time around.

On Sunday people came from all over to view the unique, the antique and the one-of-a-kind rides at the Niles Spring Fever Car Show. From classic cars to "rat rods" to a 1941 Lincoln Continental (one of only 300 ever made). The annual car show is so popular that, when the pandemic hit in 2020 and the city canceled the event, people brought their cars to town anyway.

Krysten Laine with the Niles Main Steet Association said that, after a two-year layoff, interest is higher than ever.

"And so, all of a sudden, everybody's, like, you know what? You're finally doing it? Here we are!" she said.

So, the car show was back, with a record number of entries. However, taking a look around the crowd, it was hard to find anyone wearing a mask. The fear of COVID-19 is pretty much gone, even for car-owner Eddie Zakerski, who has a heart condition and has already gotten COVID once before.

Officially, the county recommends people mask up at large outdoor gatherings but it's not required. The Bay Area currently has a 10 percent positivity rate, three times the statewide average but few at the car show seemed very worried about it.

Franco Pietroforte said he thinks people have gotten over their fear of the unknown.

"First phase, everybody was really scared. These other phases we're going through, I think everybody around here right now, they're not worried about it," he said. "So, unless another phase comes through that kills a lot of people, I think people are OK with it."

But those who did wear a mask had different reasons for doing it, like David Prakash, who works in a hospital.

"I mean, it's just a part of life now, pretty much, for us that work in the health care field," he said. "I mean, we feel naked without it."

And his father-in-law, Edward Carrillo, said he wears a mask to protect his unvaccinated one-year-old grandchild.

"We really got the mindset, like, this isn't over yet," he said. "There's still a ways to go and we kind of want to get back over that hump. We've been doing it for two years now, so why quit now?"

Along with the fear, something else was missing: anger. Everyone seemed willing to let others make their own decisions. That felt good to Cathy Palestro, who doesn't object to masks but said she enjoyed a day out without having to wear one.