SAN FRANCISCO (CBS/AP/BCN) -- San Francisco fire officials Wednesday night said a crane and concrete slab on a South of Market high-rise construction project that were unstable and considered at risk of falling have been secured and evacuation orders for nearby buildings were lifted around 9 p.m.

Additionally, the CHP reopened the westbound Interstate 80 off-ramp at Fremont Street about the same time. 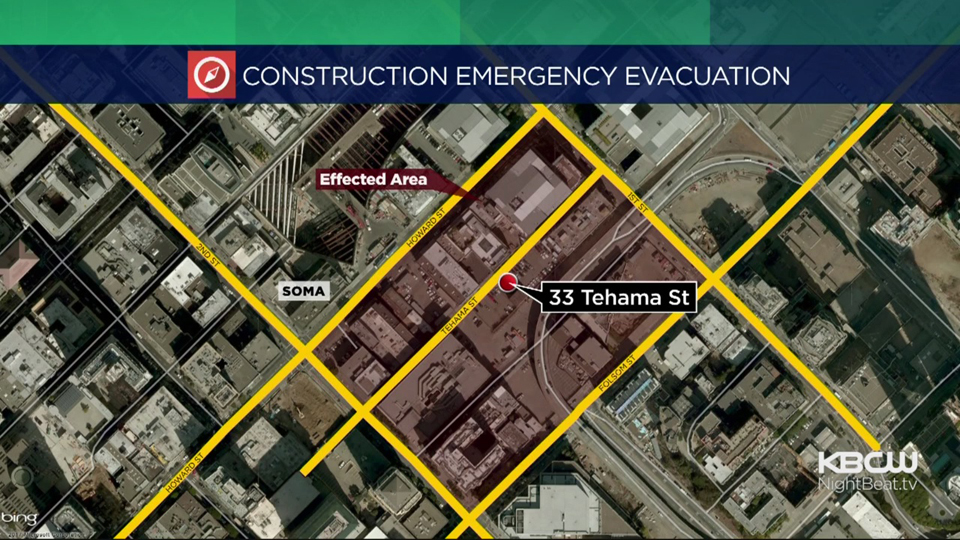 Concerns about the stability of the crane and a 2-ton concrete slab at the top of the 35-story building under construction were raised Wednesday afternoon.

The project developer said in a statement that the 2:45 p.m. incident began when a system used to form concrete walls was being raised from levels 35 to 36 and had a partial hydraulic failure.

Fire officials described the incident as a failure of one of the struts supporting a crane at the building's core, and said the tilt of the crane system caused one of the concrete walls and formwork to lean out.

During a fire department press briefing just before 6 p.m., San Francisco Fire Department spokesman Officer Jonathan Baxter said there was no danger of the concrete slab falling from the top of the high-rise project.

Baxter insisted that media reports regarding the danger had been exaggerated.

"We're seeing reports in the media that the crane is going to fall. That is false," said Baxter.

The initial tweet indicated that the building, known as 33 Tehama although it is at 41 Tehama, was being evacuated due to the slab's "potential to fail" and that people should avoid the area.

Tehama Street is an alley that connects 1st and 2nd streets and will remain closed overnight, officials said.

People in the CBS Interactive building, where CNet is located, were among those ordered to evacuate.

"Due to an issue with the building under construction on Tehama, the fire marshal has asked us to evacuate the building," the email read. "Please take your belongings and head home for the day.  We will be in touch."

The message concluded by asking employees to evacuate "in orderly fashion through the front lobby." Workers were told not to go through Tehama and to "stay safe."

CHP also shut down the Fremont Street exit for westbound I-80 just past the western end of the Bay Bridge.

San Francisco Assistant Fire Chief Tom Siragusa said that concrete slab was loosened when a strut underneath the crane at the top of the building failed.

"We were contacted by a construction company that was in the process of shoring up a crane on top of 41 Tehama Street," explained Siragusa. "The crane is setting in the center core of the building ... The center core is where the primary stairwell and elevator shaft would be."

"While they were putting it into position for its continued operation a, strut that holds up one of the portions of the crane -- a 30-ton crane -- failed and beamed the crane toward the northeast direction," said Siragusa.

That was when authorities were contacted by the construction company, at about 2:45 p.m.

"Erring on the side of caution, we have evacuated Tehama from 1st to 2nd, Howard from 1st to 2nd and Clementina on the north side of the street," Siragusa said.

It was the shift of the crane has compromised the form-filled wall at the top of the building, making it lean towards the northeast.

"The slab is essentially the entire wall that they have formed filled," explained Baxter at an earlier press briefing. "They built a form, they poured the concrete, they let it set and then removed the form. In this case, when they removed the form we have a cantilevering effect of that wall."

Baxter said that everyone but essential members of the construction crew have been evacuated from 41 Tehama, but that all other nearby buildings were being completely cleared.

"We have been aggressively evacuating buildings to make sure we don't have any injuries," said Baxter. "If it does fall, the worst case scenario is that we would have structural damage to one or two buildings below."

Baxter said there was no projected time to resolve the issue, describing it as "a multi-hour event."

The project at 41 Tehama St. is a 37-story, 403-unit luxury residential tower near the Transbay Transit Center site. It began construction in 2015, according to a 2015 statement from development and construction management firm Lend Lease.