SAN FRANCISCO (CBS SF) -- It lasted for less than a minute, as short as 15 seconds in some Bay Area neighborhoods, but the memories of the deadly and destructive 1989 Loma Prieta earthquake still linger 30 years later.

The quake claimed 63 lives, injured nearly 4,000 and caused widespread damage. It also altered the Bay Area landscape forever. Gone was the Cypress Structure on Highway 880 on Oakland, the Embarcadero and a portion of the Central Freeway. 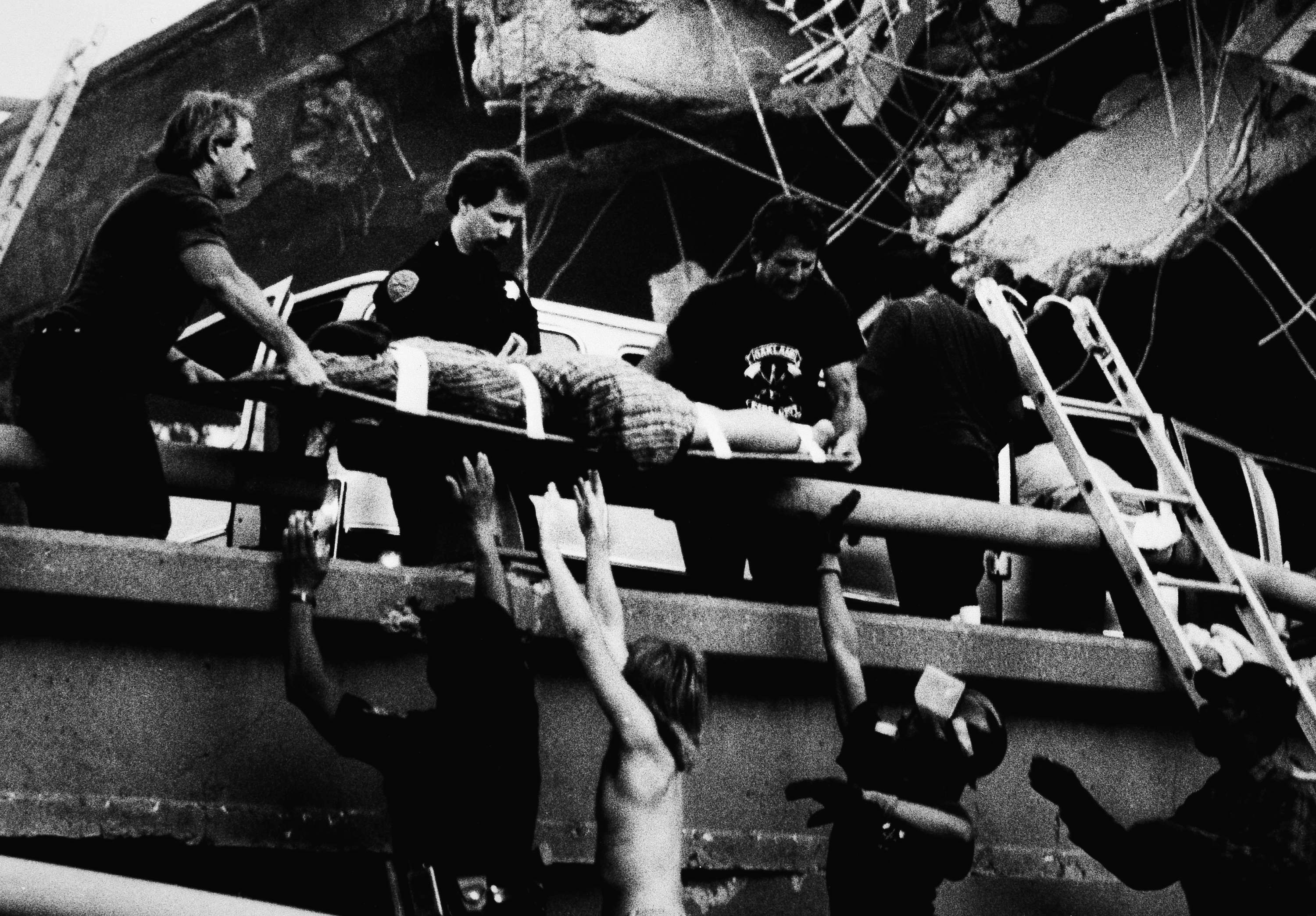 Here in the words of KPIX 5 viewers are their memories of that fateful day 30 years ago.

Michael Calhoun was in the South Bay, heading home from work at 5:04 p.m. when the earth began to rock.

"I was in Sunnyvale, driving from my full time job to my part time job," he posted on the KPIX 5 Facebook page. "I had JUST had tire work done to my car very recently and while I was driving on Fair Oaks Avenue, my car started to swerve side to side. I immediately thought the mechanic forgot to tighten my lug nuts and I was about to loose my rear wheels. I pulled off to the side of the road to check. The car was still shaking."

"I realized it was not my car, but an earthquake," Calhoun continued. "It kept going. I could see the power poles swaying. All of a sudden, a power line dropped right in front of me. I got a little scared at that point. I put the car back in drive and got out of that area. I drove to my job location. I watched the news coverage and saw the Cypress structure had collapsed. I had just started dating, who would later become, my first wife. She was on her way to Oakland for a conference. I had no idea where she was when it hit or what part of Oakland she was going to. It wasn't until much later that night that I heard from her that she was okay. She was carpooling and was on the 237. Like me, they thought they had a tire issue and pulled over to check." 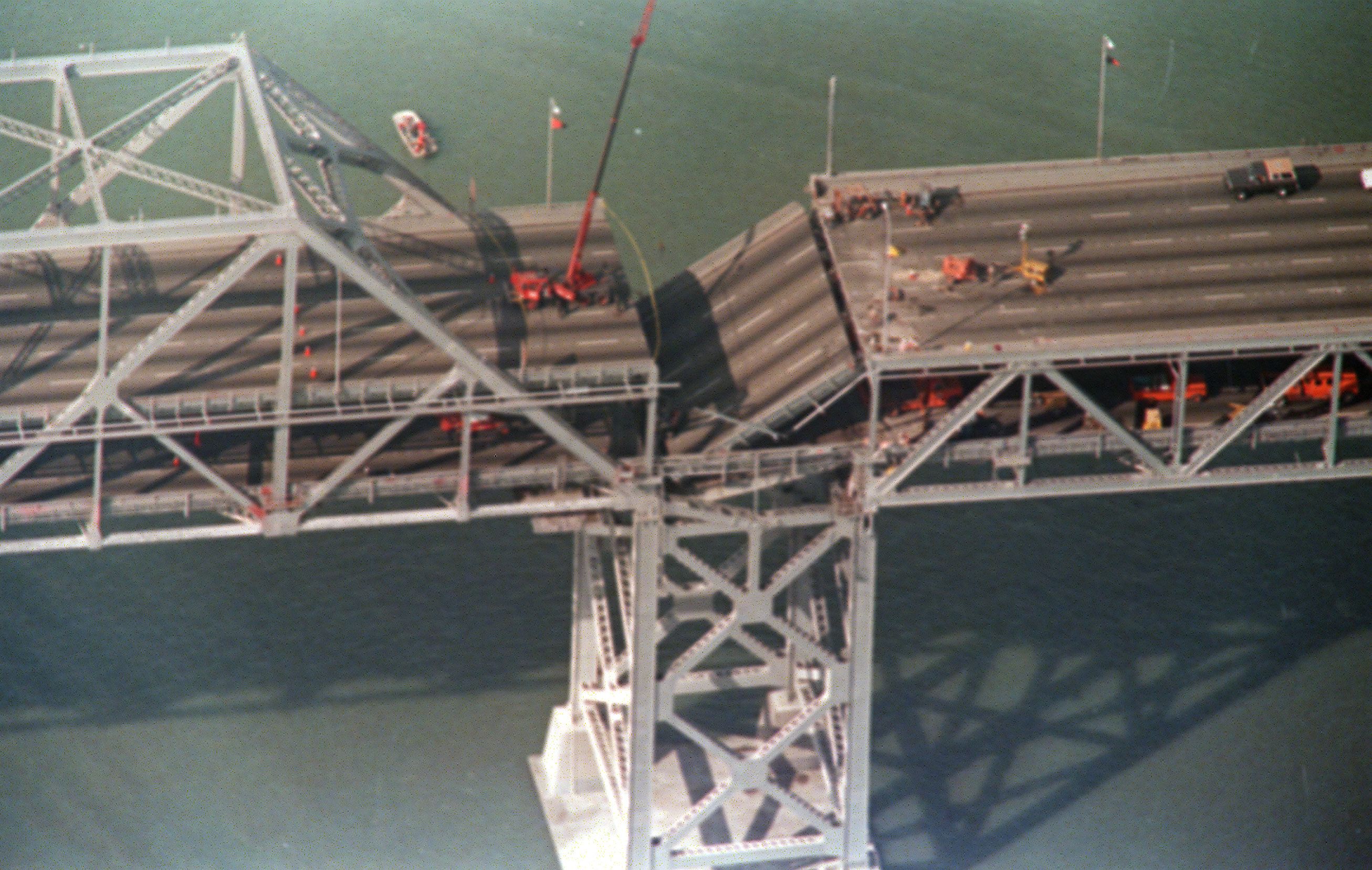 Becky Gardner Kutler Schlueter was also about to leave work.

"Just about ready to leave the office for the day in San Bruno," she posted. "It took a few seconds to realize what was happening and then evacuated the building as soon as it stopped shaking. I remember seeing the windows of the much taller building across the street bowing in and out. I was relatively new to the Bay Area and didn't yet know even where the Cypress Structure was but could not believe the devastation I was finally able to see on TV. Not too many years later I was driving regularly on 880 and crossing the Bay Bridge and often thought about what I'd do if another big one hit

Pat Leal lived at the time in the East Bay. She huddled with her husband and little granddaughter, hoping the shaking would stop.

"Lived in San Leandro and had just got home from work," she posted. "My husband my little granddaughter Jacque and I just stood still and I kept saying 'Oh my God' over and over until it stopped. No power for hours. No damaged to our house."

Lesli Fullerton-Pacis was a student at San Francisco State.

"Had just stepped out of the psych building heading across the street to catch the M," she said. "Being outside on a loud corner, I felt the earthquake, but not as much as if I'd been inside. My first clue that it was serious was when the Muni stopped moving. I still didn't know how bad it was until after I had walked from SFSU to my home in Diamond Heights and my mother told me." 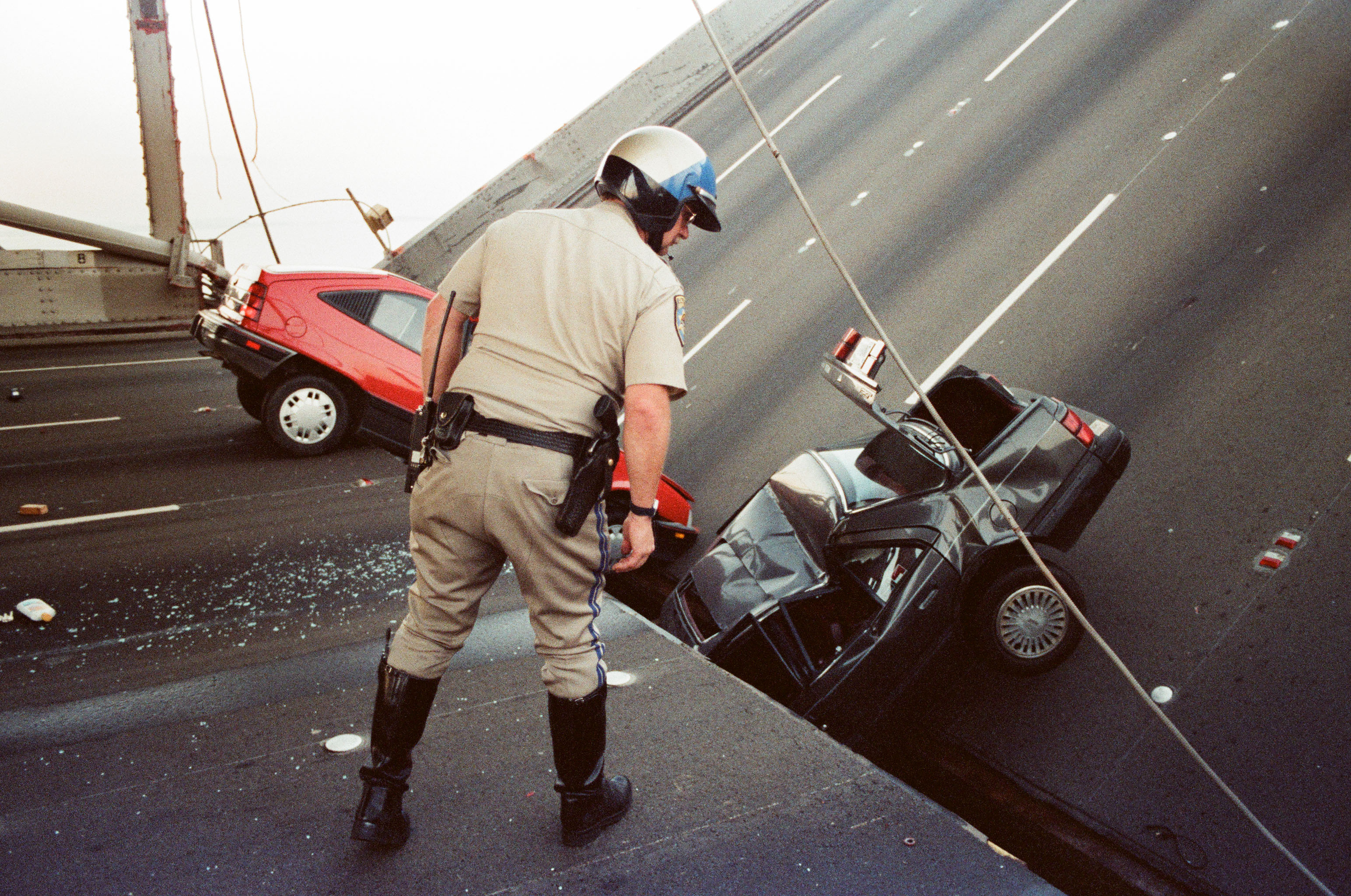 Scott Kinkel endured a few moments of embarrassment during his hurried escape into the street.

"I was in the shower on the 2nd floor of my house built on the top of a foothill," he posted. "The house was shaking like crazy, the shower doors were banging together loudly and it felt like the whole house was going to slide down the hill. So, I grabbed the nearest thing to put on, my wife's pink robe (no kidding) and ran out into the street.":

"It was still shaking and the water was splashing a couple feet above the community pool across the street," he added. "When it was all over, Yep, that was me, the wet guy in a too small pink robe in the middle of the street."

Lorene La Centra-Templeton posted that fate saved her from the destruction on the Cypress Structure.

"I was suppose to be on the Cypress that night," she posted. "I got off work about 4:15 in south Hayward and was headed to Albany (a friends house for dinner) but got a call to go to a CPR class in Pleasanton instead ...I needed that class on my resume as I was finishing up pharmacy school so I didn't end up going on the Cypress freeway. I believe I would've been very close by it or on it had I went to Albany that night."

Larry Pasion was studying inside the Fremont Main Library.

"(I was) studying before the World Series on the top floor next to the window at the then new Fremont Main Library," he posted. "Felt the initial shake & didn't think anything of it. Then the next few seconds after, everyone took cover. I went under the table and once the shaking stop I got up to look outside only to feel the whole library sway side to side. The library was built on rollers. Didn't realize the effect or the size of the earthquake until I notice the double decker bridge in Oakland had collapsed....still remember it to this day." 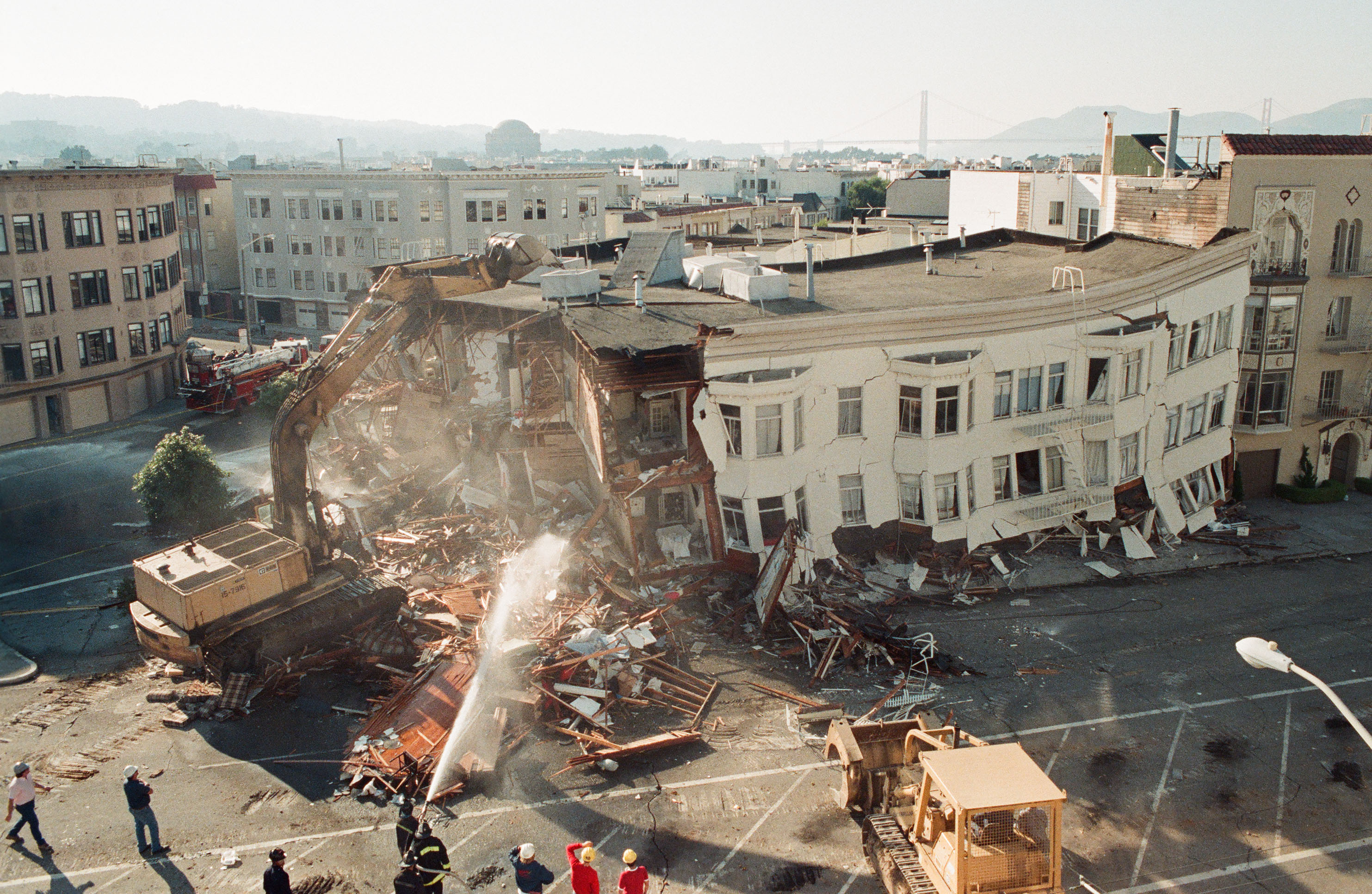 Candi Nissim was at a BBQ she will never forget and the friend she lost on that day.

"BBQing burgers to watch the World Series with our neighbors in Concord." she posted. "My husband had left work in the City early and was already home (thank goodness). The earthquake hit and when things quieted down we watched in horror the damage it had cause. We watch the rescue efforts in the City of a home collapsed and on fire. It was a dear friend of ours who was trapped in that home and who died in it. There is no words for the anguish and helplessness we felt."

"We forgot about the burgers on the BBQ, forgot about food completely, later around 10:30pm our neighbor checked his grill the burgers had cooked down to round burnt nuggets, to be remember to this day as the earthquake burgers. The earthquake will forever be remembered for all the lives lost and the heroic actions, but also sadly the Anniversary of the lost of a very dear friend."

Dee.Es.Malo remember the fear that gripped her 8-year-old body.

"Running downstairs in our town house in Newark," she posted on the KPIX 5 Instagram page. "I was bouncing of the walls all the way down! Dad was coming home off the Dumbarton. It took hours for him to get home. Never been more scared in my 8-year-old life."

Taylor tweeted on the Twitter Page that a large wave came out of the family pool.

"I was at home in Santa Clara, and watched a wave of pool water come up above the seven foot fence," he tweeted. "And somehow the sandwich I was eating got thrown across the room."

Kaji tweeted about the terrifying moments in the kitchen.

"I was cooking in the kitchen," Kaji tweeted. "The cabinet doors were opened by shake, all of dishes slided down and crushed one by one on the floor. All of furniture were dancing, A big TV jumped down on the floor. I couldn't forget the day in San Francisco. I was lucky that I could survive it."