SAN JOSE (KPIX 5) -- With hardly a drop of rain in the entire month of February, 59 percent of California is now experiencing abnormally dry conditions according to the Federal Drought Monitor.

At Calero Reservoir in South San Jose, it was a nice day to be out fishing for Steve Trimmer, but also something of a guilty pleasure.

"I love the sunshine. Everything's great out here. When you're retired, it's nice," said Trimmer. "But about the lack of rain, that's bad. That's bad. We're really going to need it."

Satellite photos of the Sierra snow pack also show what a difference a year can make. 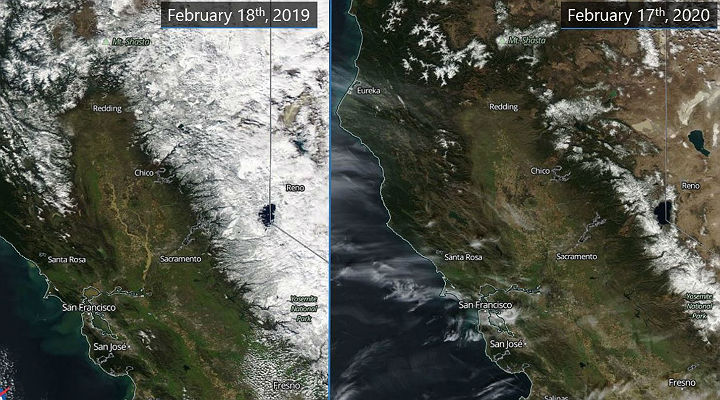 "You know, it's a dry year," said Matt Keller of the Santa Clara Valley Water District. Keller said above ground reservoir levels are down to 59 percent of average for this time of year.

But underground wells -- where most of the Valley's water is stored -- are full because of previous plentiful rainy seasons.

"We've got another month or two to go in the rainy season. Once that's done, we'll evaluate. But we're in good shape as far as our water supply goes right now," Keller said.

The Water District says residents are still cutting back water use by 21 percent compared to 2013 levels.

Long-range plans include greatly expanding the Pacheco Reservoir off Highway 152. Concerns about drought conditions would only be raised if there were several dry years in a row.

"We're still a ways off from talking about impacts to the water supply," Keller said.