SAN FRANCISCO (KPIX 5) -- Studies show your kids may be at greater risk for identity theft than you are.  The good news is that there is a tool to prevent anyone from opening credit or taking out loans in their name. The bad news is that the credit bureaus won't let you use it to protect your kids!

A proposed state law in California may open the door for child credit freezes nationwide, but I discovered a loophole that allows the bureaus to put you and your kids at greater risk.

Why Kids Are At Risk For ID Theft

At 12 years old, Corrie Vaughn earned money by taking out the trash. However, the Northern California middle school student was well aware it would take more than chores to pay off the debt an identity thief accumulated in his name. "I don't know what credit is, but I know it's not good to have bad credit," said Vaughn.

Nelia Ellsworth doesn't yet know if crooks racked up thousands of dollars in her kids' names, but she was horrified to learn her kids couldn't get much-needed medicine because someone else was using their social security numbers for insurance. "They told me three of my four kids had insurance in another state."

They make up just a few of the growing number of child identity theft victims. A Carnegie Mellon report found more than one in ten children were victims of identity theft and that was before millions of kids were exposed last year though massive insurance and government hacks.

"Well, if I was going to steal someone's credit, I'd steal a child's credit," said Newman. "They're not gonna know about it for a dozen years."

A credit freeze, also called a security freeze, is widely believed to be the single best tool to prevent identity theft. It basically prevents anyone from running a credit check using your security number.

A credit check is generally needed for a crook to take out credit card, loans or other types of credit in a child's name. However, it's important to note that a credit freeze does not prevent tax identity theft, insurance fraud or some other forms of ID theft.

"A credit freeze for children is a fabulous idea, because they're not going to be using their credit" said Newman.

So why won't credit bureaus let parents proactively create a file to freeze first?  "The credit bureaus make their money selling your information to would-be creditors," said Newman. "In the case of children, it's not worth it to them."

Recognizing the unmatched value of a credit freeze, 23 states have now passed laws requiring the bureaus allow parents to freeze their children's credit. California is not yet one of them.

The Work-Around And Security Risks

In 2014, I found a work-around to getting my child's credit frozen.

I added my toddler as an authorized user on my credit card, which created a credit file - not a credit report or a score - but a credit file that the bureaus could be forced to freeze.

But I quickly discovered that the credit bureaus themselves were putting both children and parents at greater risk.

In my NewsMom blog: "How I Forced The Bureaus To Freeze My Child's Credit," I've outlined those security risks and described how I spent six months convincing the bureaus to make changes.

"I would be concerned about that," said Newman, who pointed out that the credit bureau name and address  on the envelope alone is enough to tip off identity thieves a child's entire identity is inside. To make matters worse, bureaus have suggested parents send it attention "Credit Freeze" or "Protected Minor Security Freeze."

When I called to request a secure alternative to submitting these her documents, I found another concern. Foreign call center reps wouldn't even transfer me to a U.S. supervisor until I gave them my child's social security number. Yet, the call center employees said they had no employee ID numbers to let my track who I was giving this sensitive information to. When pressed, one rep did say she was in India and her name was "Jane Smith."

Keep in mind, my daughter didn't yet have a credit file for them to look up.

The Bureaus' Response - And A How-To Guide

When questioned about the practice, media representatives for Transunion and Equifax both apologized and said call center employees can look up accounts using an address and other "identifiers."  You can read their full response in this NewsMom Blog titled "You Need My Social Security Number But You Won't Give Me Your Employee ID?"

TransUnion and Equifax both also pointed out that Indian call center employees have no paper or writing utensils. "I assume they have no memories?" Newman said. "If someone is sitting (in a call center) and they managed to memorize one name and social security number a day, that's probably more than they would make in a month," he warned.

Over the next six months, the bureaus did begin to make some changes. Experian now lets you upload documents online while Transunion and Equifax will only give you a fax number. However, you have to know to ask for the more secure methods.

Following my child-credit-freeze odyssey, I ultimately created a step-by-step guide to freezing your child's credit. To my knowledge, it is the only one of its kind. It includes detailed summaries for each bureau, hard-to-find contact information, tips, sample documents, and tips on how to avoid security concerns specific to each credit bureau. There's also a detailed description of the hurdles parents may encounter with each bureau along the way. 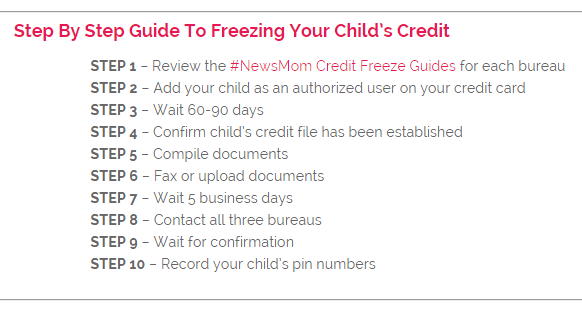 Equifax has now voluntarily agreed to allow child credit freezes every state, but Experian & TransUnion still refuse. To be effective, you must freeze a file with all three bureaus.

"For California not to allow minors to have credit freezes just doesn't make sense," said Gatto.

For the first time, the proposed legislation would give California parents the right to freeze their child's credit and utilize the single best tool to prevent financial identity theft. Gatto's office believes the bill will face little opposition because it's similar to the laws passed in other states and the bureaus have already weighed in on.

Gatto, Newman and many others believe the California law will be a precursor to federal legislation this year that will give the same rights to parents nationwide.

"This is something that ought to be a national policy" said Newman.

"You know if California acted, 1/10th of the population would have this protection and we'd probably get a federal law on the same topic," said Gatto.

However, I did discover a loophole in AB 1580 as well as in similar laws in many other states. The bill requires parents to submit the documents needed to prove guardianship "to the address or other point of contact and in the manner specified by the consumer reporting agency." Currently the "manner specified" by two of the three credit bureaus puts sensitive information at risk.

I pointed this out to Assemblyman Gatto, and he agreed to amend the legislation to ensure a safe and secure child credit freeze process in addition to the right to freeze your kids credit in the first place.

"The law should require the credit bureaus to make this as easy on parents as possible," he said.

The California law should go to the floor for a vote later this year. Meanwhile, Congresswoman Jackie Speier is pushing for federal child credit freeze legislation.

"Parents should be able to freeze their child's credit to protect them from cyber breaches," Speier said after seeing our reports.  "That is why I am a co-sponsor of the Protect Children from Identity Theft Act that directs the Consumer Financial Protection Bureau to do exactly that, give parents and guardians the ability to create a protected, frozen credit file for their children until they reach their 18th birthday."

The bill is currently stalled in committee. We will  follow up on that legislation later this year.