"What is happening to our society? A renewed national movement to heal memories and correct the injustices of racism and police brutality in our country has been hijacked by some into a movement of violence, looting and vandalism," he said in a statement Saturday night.

Serra was an 18th century Roman Catholic priest who founded nine of California's 21 Spanish missions and is credited with bringing Roman Catholicism to the Western United States.

His legacy within the state has also draw a great deal of criticism because he forced Native Americans to stay at those missions after they were converted or face brutal punishment. His statues have been defaced in California for several years by people who said he destroyed tribes and their culture.

All night and through Saturday afternoon, crews worked to clean up the damage left behind in the famed park's Music Concourse. As they worked, a lot of people also came out to see the damage for themselves. 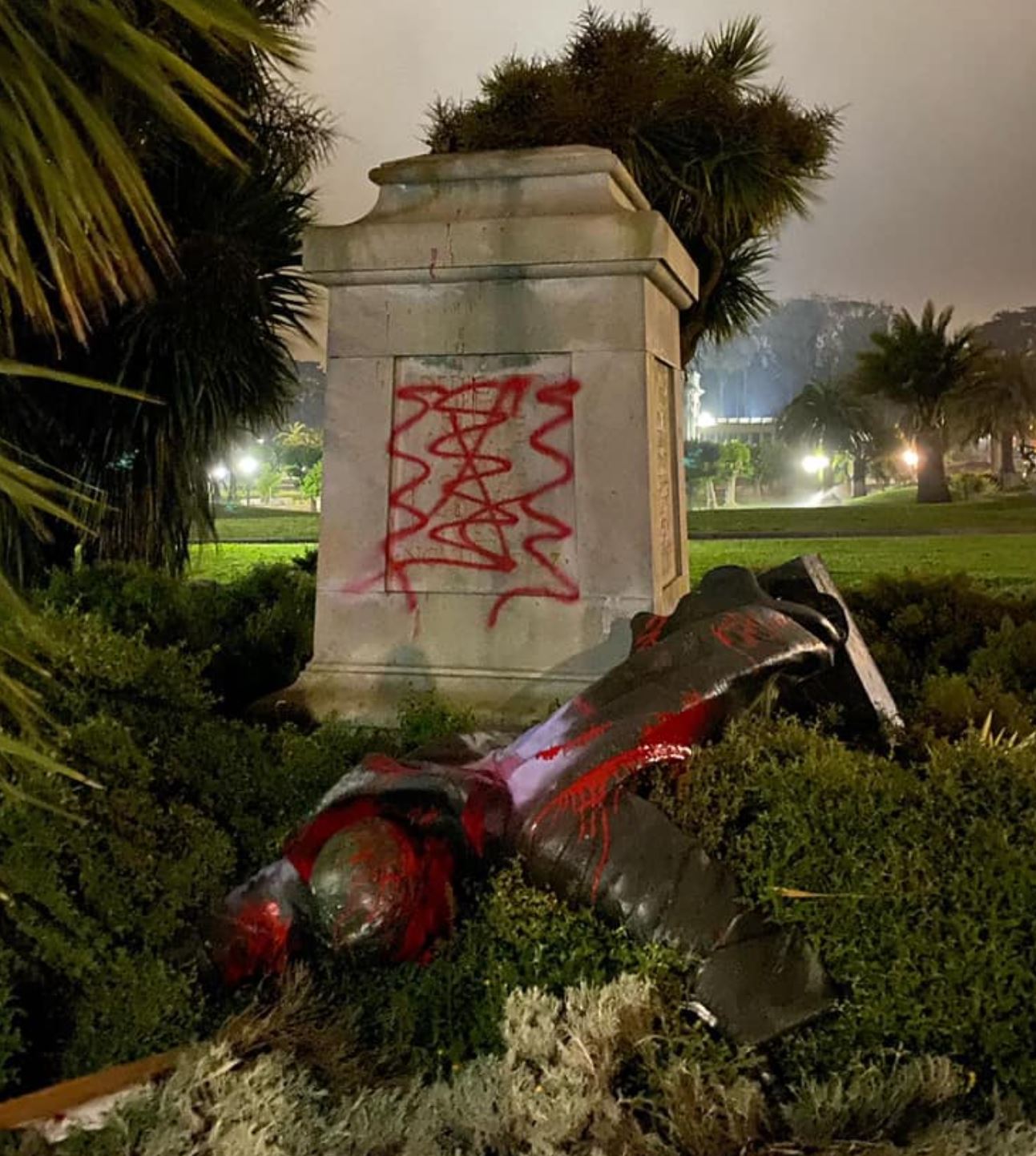 Among the suddenly-empty pedestals, one that held Star-Spangled Banner poet Francis Scott Key, a man who, in fact, owned slaves. Another held Serra, founder of California missions and also a slave owner.

"When I was here last week I had noticed Junipero Serra was still up," said a bystander named Tasmin. "I thought it was, you know, surprising to have him so prominently in the park, considering the history."

But the crowd wasn't finished with the toppling of the Key and Sera statues. They also knocked down the monument to former Pres. Ulysses S. Grant who, as Union general accepted the surrender of the Confederacy then, later, sent U.S. troops to fight the Ku Klux Klan.

"I don't get Ulysses S. Grant because he was fighting for the abolition of slavery, not for slavery," a man named Seth told KPIX. "So I don't understand why (his statue) would be taken out." 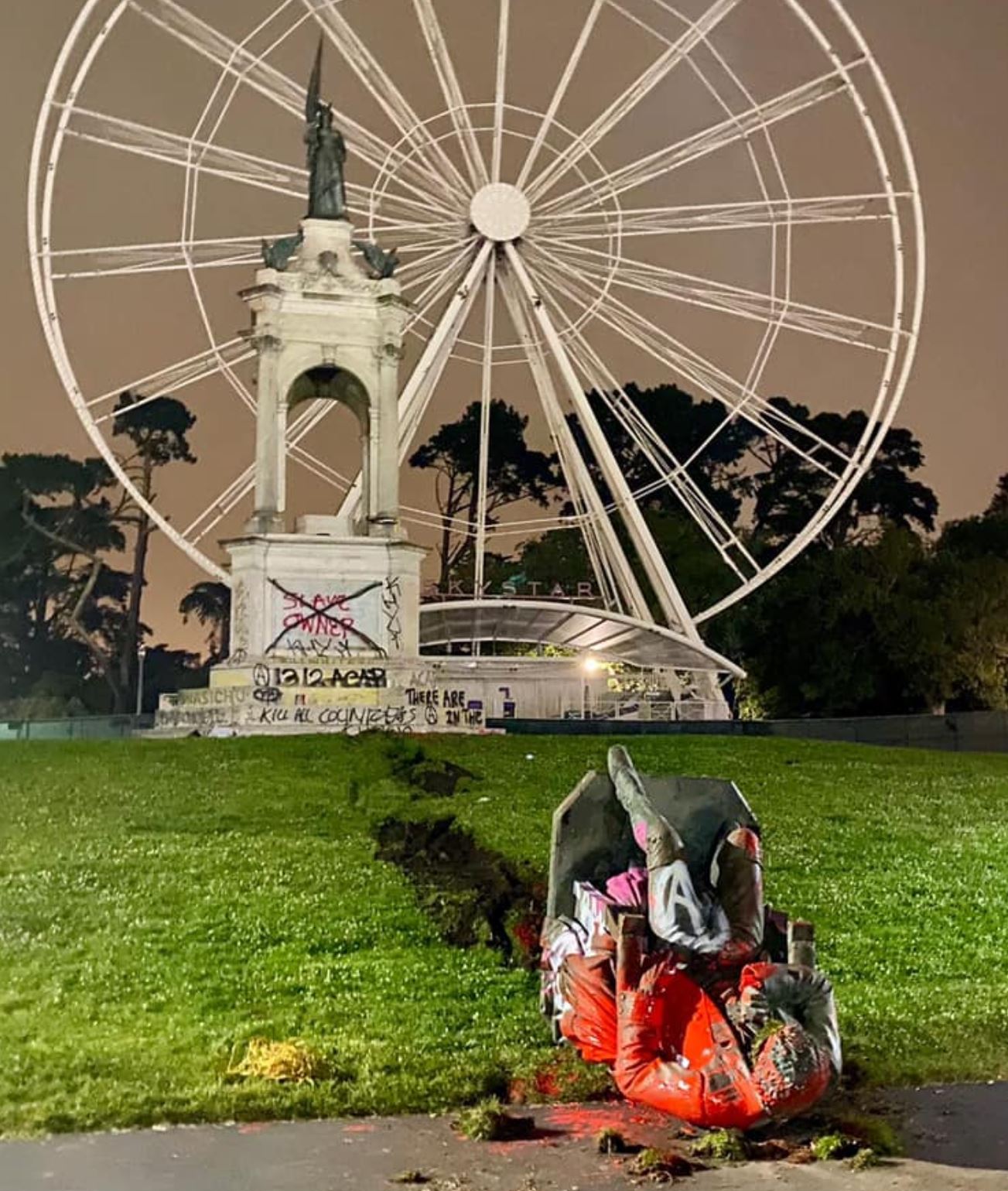 Vandalized but not removed was a statue of Miguel de Cervantes, a Spanish writer who was himself a slave for five years.

"Don Quixote and Sancho Panza -- and for what?" asked a frustrated Howard, watching the graffiti removal from John F. Kennedy Drive. "It's very sad. It makes me feel it's totally out of hand and it has nothing to do with civil rights."

The spray-paint damage stretched from the de Young, across walkways in the park and out into the surrounding neighborhoods.

The commotion lasted at least an hour and a half. "And the police did nothing," said another bystander named Howard. "They let them do it."

Police would not take questions Saturday about what happened Friday night but they issued a statement, reading, in part: "Officers arrived and observed several hundred people vandalizing structures and statues. As emergency backup arrived, the crowd turned on police and began throwing objects at the officers. At approximately 9:30 p.m. the group began to disperse in several directions. No arrests were made and no injuries were reported."

San Francisco Mayor London Breed also released a statement on the vandalism in the park:

There is very real pain in this country rooted in our history of slavery and oppression, especially against African-Americans and Indigenous people. I know that pain all too well. But the damage done to our park last night went far beyond just the statues that were torn down, and included significant damage to Golden Gate Park. Every dollar we spend cleaning up this vandalism takes funding away from actually supporting our community, including our African-American community. I say this not to defend any particular statue or what it represents, but to recognize that when people take action in the name of my community, they should actually involve us. And when they vandalize our public parks, that's their agenda, not ours.

If we are going to make real change, let's do the work with our impacted communities to make that change. To do that, I have asked the Arts Commission, the Human Rights Commission, and the Recreation and Parks Department and its Commission to work with the community to evaluate our public art and its intersection with our country's racist history so that we can move forward together to make real changes in this City. Who and what we honor through our public art can and should reflect our values.