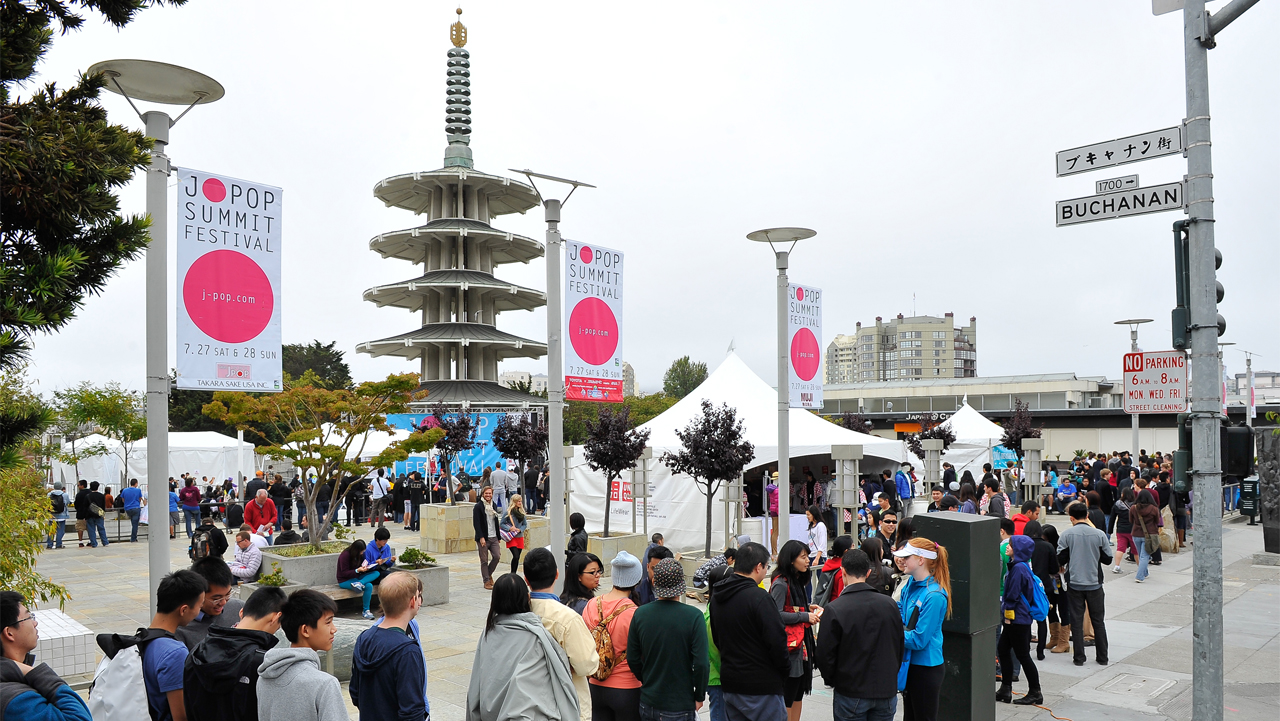 In 2017, two of San Francisco's biggest cultural festivals happens in Japantown. The Northern California Cherry Blossom Festival spans two weekends, April 8th & 9th and 15th & 16th and is celebrating it's 50th anniversary as one of California's most prominent celebrations of Asian traditions.

The annual Nihonmachi Street Fair returns for its 44th year in San Francisco's Japantown August 5th & 6th. Described as the "original melting pot of street fairs" the popular fair celebrates Asian American culture and will feature live entertainment, Asian artisans, a car show and an assortment of tasty food. If you're planning to attend the festival this weekend in the country's largest Japantown (also known as Nihonmachi), this handy guide will introduce you to practical information about this historic neighborhood and give some travel tips, in addition to recommendations for the best dining, lodging and attractions.

The first Japanese immigrants came to San Francisco during the late 1860s and settled in Chinatown and neighborhoods south of Market Street. After the 1906 San Francisco Earthquake devastated much of the city, many of the Japanese settled in the largely undamaged Western Addition neighborhood. Shortly after the attack on Pearl Harbor during World War II, all Japanese-Americans and Japanese resident aliens living in the United States were forced to relocate to internment camps. By the end of the war, many of the Japanese-Americans and resident aliens returned to San Francisco.

How to Get to Japantown

Japantown is located approximately one mile west of Union Square. The main thoroughfare leading to Japantown is Geary Boulevard, which runs east to west from downtown San Francisco to Land's End. Traffic is expected to be heavy during the Nihonmachi Street Fair, and available parking spaces may fill up quickly  at the Japan Center main garage and the Fillmore Street Annex Garage. Additional parking may be found at the Fillmore Center Garage two blocks away.

Related: Food Lover's Guide To San Francisco
Where To Stay Near Japantown

The only hotel in Japantown is Hotel Kabuki. Other hotels within a few blocks are the Queen Anne Hotel and The Buchanan, formerly Hotel Tomo. Several other hotels can be found within two miles including those in Union Square, the Financial District and Nob Hill.

Where To Eat In Japantown

The Nihonmachi Street Fair Food Fest will host several food vendors and popular food trucks, such as Kokio Republic and Hotel Nikko's Anzu Food Truck. In addition to the amazing food within the festival, several outstanding Japanese restaurants and cafes can be found all over Japantown, particularly inside Japan Center. 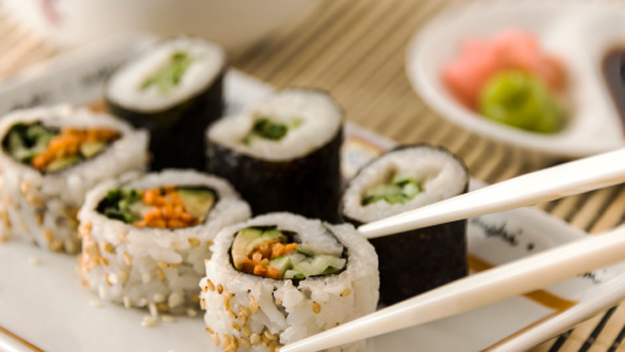 The Rest of Japantown

Located between Bush and Sutter streets, Cottage Row is a charming collection of 19th century Victorian homes that survived the 1906 San Francisco Earthquake. The 22 homes are listed on the National Historic Register of Places and also features the Cottage Row Mini Park.

The primary source of dining and shopping in Japantown, Japan Center is buzzing with activity even when there isn't a festival or special event being held. Spread over the East and West Malls and divided by the landmark Tower of Peace,  the center features nearly 20 restaurants and more than 25 retail stores. Recommended stores to visit include the Japanese antique store Asakichi, the popular discount store Daiso Japan, the lively Niija Market and Kinokuniya Bookstore. 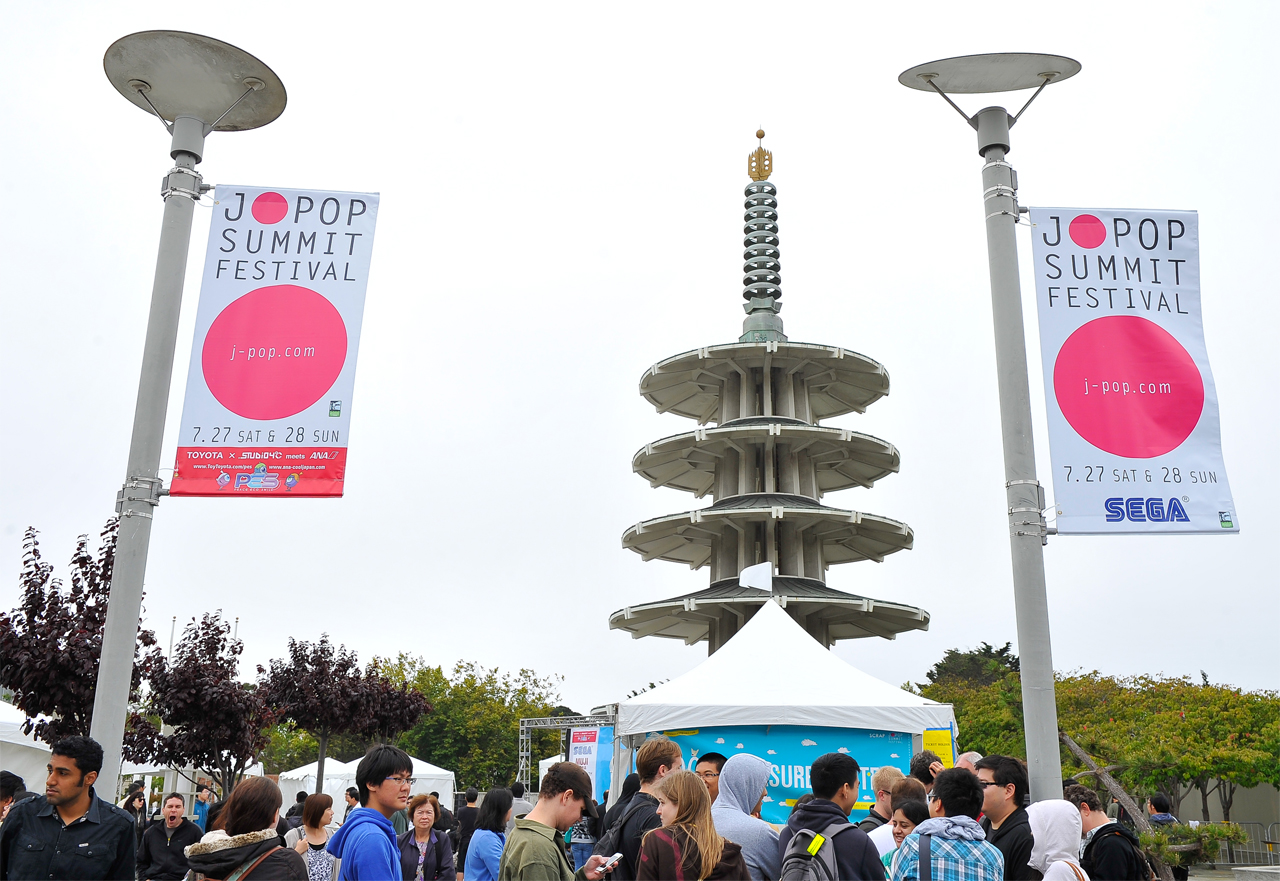 The largest and most famous landmark in Japantown is the Japan Tower of Peace, also known as the Peace Pagoda. Located between the East and West Malls of Japan Center on the Japantown Peace Plaza, the five-tiered Buddhist stupa was a gift to San Francisco from its sister city in Japan, Osaka, in 1968. The famed concrete structure was created by prominent Japanese architect Yoshiro Taniguchi.

First-time visitors to the Nihonmachi Street Fair will likely spend most of their time on Post Street, the Food Fest on Webster and in Japan Center. But they should also take time to stroll down Buchanan Street to visit the many family-owned businesses in the heart of Japantown. Among the most interesting stores are Sanko Cooking Supply, the celebrated bakery Benkyodo Company, Aloha Warehouse for the largest selection of ukeles in Northern California and Yasukochi's Sweet Stop.

Located right in the center of the Nihonmachi Street Fair are three permanent exhibits made of bronze and stone. The nine foot tall sculptures portray Japanese Americans living in America, including a stirring piece depicting a family preparing for their journey to a World War II internment camp. Introduced in 2005, the sculptures were part of the California Japantown Landmarks Project and were created by Louis Quaintance and Euguen Daub.

Randy Yagi is a freelance writer covering all things San Francisco. In 2012, he was awarded a Media Fellowship from Stanford University.