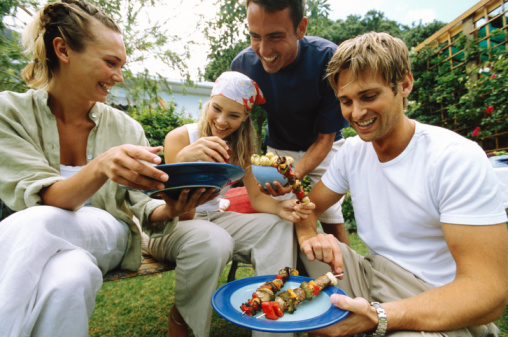 Just because Labor Day is known unofficially by vast segments of the population as "The Last-Monday-You-Can-Drink-On-Without-Getting-Fired" doesn't mean it can't also be another day to showcase your endless trivia knowledge.Here are some knowledge-bombs to drop at your Labor Day barbeque and don't worry, we won't tell if you cheat and write them on your paper plate.

Why Do We Have A Labor Day?

Despite common-day belief, Labor Day was not actually created as a day to lounge around shirtless, catching the last of the summer rays and trying hard to avoid anything even remotely considered "labor." The day was originally sanctioned as a time when labor unions could march down the streets to both flex their powerful arms and make demands of their bosses. While early celebrations often featured impassioned speeches on the economy and well-organized parades, today's celebrations tend to highlight well-organized cookouts and end-of-season trips to the beach – the two at least still have keg drinking in common.

The two guys duking it out in the history books for the title of creator of America's Labor Day have almost identical last names: Peter McGuire and Matthew Macguire. Peter McGuire has long been considered the Labor Day creator reigning champ with the story going that in 1882, while he was the general secretary of the Brotherhood of Carpenters and Joiners, he suggested its creation as a day when laborers would come together to fight for better working conditions. But in recent years, some historians are saying that it was really Matthew Maguire, serving as secretary of the Central Labor Union in New York at the time, who dreamed up the Monday holiday and sent out invitations for the first parade in New York City.

The first Labor Day Parade took place in New York City's Union Square on September 5th, 1882. Ten thousand industrial workers put down the tools of their trade and took an unpaid day to protest unreasonable working conditions and fight for an eight-hour workday. While President Chester A. Arthur had actually already signed the eight-hour workday into law in 1868, this law was largely ignored and many laborers still worked 14-hour days. The Labor Day Parade at Union Square was a day when laborers got together and spread the word that if the government would not enforce their eight-hour day, they would have to ban together and enforce it themselves. To this day Union Square remains a key site of protest for national issues.

While many of us may associate Oregon more with a video game than actual trailblazing, it was the first state to proclaim Labor Day an official holiday.

It took a combination of a national tragedy and a President seeking reelection to make Labor Day a national holiday. In 1894 Eugene Debs organized the infamous Pullman railroad strike that paralyzed the nation's transit structure. Federal troops were dispatched to Chicago, the hub of the protest, and killed two workers in an attempt to break the strike. In an effort toward reconciliation with the workers and to get the Union vote, President Cleveland passed a bill to make Labor Day a legal national holiday. He still lost reelection.

Jerry Lewis has been hosting the Muscular Dystrophy telethon every Labor Day weekend for the last 45 years. In that time he has raised more than $1 billion and logged more than 900 hours of TV time. This year's telethon will be his last.

Not wearing white before Memorial Day or after Labor Day may have started as simple common sense – white colors attract less sun and so will keep you cooler during the summer months – but it wasn't until the 1950s that it became a fashion rule to live by. In the '50s WASPY women everywhere joined forces and decided that wearing white after Labor Day was not practical and no woman wearing white shoes would be invited to their Tupperware parties after the first weekend in September.

Go Ahead and Relax!

Over nearly 130 years, the Labor Day holiday has changed significantly and is, these days, more often seen as the official "End of Summer" than a day of political unrest.

In fact in 1996, New York City's Union leaders agreed to not have the annual Labor Day parade on the Monday holiday for the first time and to instead march the following Saturday. According to a New York Times' article of that year, "One problem with holding the parade on Labor Day, labor leaders say, is that so many union members prefer spending the last day of vacation in the Poconos or at the Jersey Shore instead of trudging down Fifth Avenue to show their solidarity with the workers of the world."

So there you have it! Eight pieces of Labor Day trivia to impress your friends and family with over the three-day weekend. Now go, have fun and relax. Raise a glass to your Labor Day forefathers who worked hard to get you this day off. And if you spill your drink on your white pants, who cares? They're no good past Monday anyway.

Maude Standish is the research director for trend forecasting company Trendera and writes daily for thetfiles.com. In her spare time she hangs out with her cool cats and is writing a screenplay.