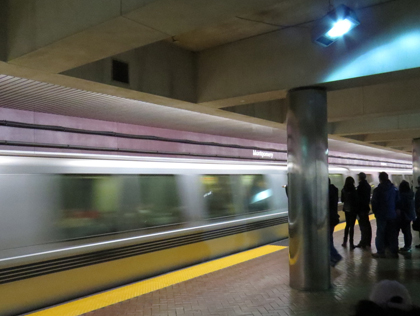 With gas prices expected to remain high in the foreseeable future, taking public transportation is not only better on the pocketbook, but it's also better for the environment. Whether you're planning for your next trip or just need assistance in understanding timetables, you can save money by riding a bus, subway, rail and even boat service instead of a car rental or your own personal vehicle. One of the most common misconceptions is that public transit will always take much longer, but that's not always the case. This public transportation guide will guide you through the basics that will make your next ride that much easier.

Related: Tips On Traveling With Kids

Every major transit system has a website with fare information, such as New York's enormous MTA. By clicking on this link, you'll see the base fare is $2.50 for a single bus or subway ride and a reduced fare of $1.25, which is eligible for customers 65 years old or older or those who live with a qualified disability. Compare that to the average price of a car rental for $72 per day in New York City. Each transit system will have similar guidelines but senior citizens and individuals living with a disability can obtain reduced fare by presenting a Medicare card. Many transit operators offer an express bus fare and/or transfer tickets, allowing you to make connecting buses in the same direction.

If you're planning on riding buses over a period of time, like other transit agencies, the New York MTA offers multiple day and monthly passes with a variety of options including the MetroCard. The 30-day pass for the New York MTA is $112, which is much higher than other major transit agencies, but can help save riders money if they rely on buses and subways frequently. In comparison, the Los Angeles MTA charges $75 for a monthly pass and San Francisco Muni charges $76 for Muni and San Francisco BART service. Of course, fees for extended passes are reduced for senior and customers with disabilities and many transit agencies also offer a reduced price for children ages five to 17.

Fares on other forms of alternative transportation, such as a rail only or ferry service, have similar fare structures and information can be found on each agency's website or by calling or emailing the information center.

How to Read a System Map

Perhaps the most mystifying aspect of riding public transportation is understanding how to read a transit schedule or system map. But if you can understand New York's MTA schedules and maps, you should be able to understand most any transit service in the world (more on this later). Let's start with New York's subway map, which is slightly easier to comprehend than its counterpart bus map.

The New York subway system is an enormous network of wheelchair-accessible routes serving all five boroughs of the city. For demonstration purposes, let's use the Manhattan subway map (available for download as a PDF).

Say you want to take a subway from Greenwich Village to Times Square. As long as you can read and know where each location is on a map, you'll be able to determine which subway line to take. Take a few moments to see if you can find Greenwich Village, using prominent landmarks such as New York University or Washington Square.

If you're still having trouble locating these spots, Google Maps might be easier to read. For example, enter Washington Square New York in Google Maps and once open, you'll see Washington Square, an endless maze of streets and several tiny icons, some of which are white Ms with a blue background. The M closest to Washington Square is at the intersection of Avenue of the Americas and Washington Place (see Washington Square Hotel). With closer inspection, you will see "W 4 St (A,B,C, D, E, F, M)" alongside the white M – the W 4 St. represents the West 4th Street/Washington Square subway station and the letters are the subway lines (all wheelchair accessible) that serve the station. Returning to the subway map, you now may be able to spot "W 4 St Wash Sq."

No subway line goes directly from that subway station to Times Square, as the A, C and E lines (all in blue) travel west and then north up Eighth Avenue to the Port Authority on 42nd Street, a five-minute walk to Times Square. Alternatively, Greenwich Village travelers can take the B, D, F or M lines to 34th Street/Herald Square and then transfer to the N, Q or R line to Times Square at 42nd Street.

Related: The Ultimate Guide To Your Summer Road Trip

As mentioned previously, if you can understand the New York MTA subway map, you should be able to follow virtually any transit map in the world. The Paris Metro map is an excellent example of another complex system. However, because each station is in French, you would have to remember certain names, such as Charles de Gaulle Etoile is the station for the Arch of Triumph. If you want to visit the Eiffel Tower, you can take the No. 6 line to Bir-Hakeim, a few minutes' walk away from the iconic tower. However, the route closest to the Eiffel Tower is C1 on the RER line. Travelers must take the No. 1 one stop north, in the direction of La Defense to transfer to C1.

*If you are uncertain which direction you are going on the Paris Metro, it helps to know the end of each subway line. For instance, the northern terminus on the No. 1 line is La Defense and the No. 4 line that serves Notre Dame Cathedral has a southern terminus at Mairie de Montrouge and the opposite terminus at Clignancourt. This information can very helpful when reading a system map and determining direction in an unfamiliar location. In many other major international cities, route and map information is available in English.

How to Read a Transit Schedule

Using the New York MTA, let's look at the B line, serving Greenwich Village and the Port Authority. You might immediately notice the B line offers weekday service only. Find the northbound schedule, then the W 4 St Washington Sq timepoint listed just below the name of the route (From Brighton Beach, Brooklyn, to Bedford Park Blvd. Bronx). Looking at a time period from 9:54 a.m. to 12:54 p.m. reading left to right, the service runs every 10 minutes, e.g. 9:54 a.m., 10:04 a.m., 10:14 a.m., etc. Moving two columns over to 47-50 St Rock Ctr shows the trip takes five minutes.

The D line operates seven days a week but there are separate timetables for Saturday and Sunday. Using the Sunday schedule in the southbound direction, the D line runs approximately every 20 minutes from the 47-50 Streets/Rockefeller Center station to the West 4th Street/Washington Square station.

Some major systems, such as the Paris Metro, do not have schedules, but because the trains run so frequently, passengers won't have to wait long. Other forms of public transportation, such as passengers trains, have simplified schedules, showing just arrivals and departures.

Related: Best Train Trips In The USA
If You Still Need Assistance

In all fairness, these examples are from the world's largest and most complex transit systems. But every public agency in the country, regardless of size, offers similar system maps and timetables. However, if you're still having trouble, most every agency offers an online trip planner, allowing you to enter addresses for your starting point and destination. If you're still having trouble, the majority of transit companies offer trip planning and customer service over the telephone, in addition to TTY service to individuals living with hearing impairments.

People who have difficulty accessing a conventional transit service, due to physical, visual or cognitive disabilities, are eligible to use paratransit service. Typically known as a "demand-response" service, paratransit is offered in several major agencies and provides point-to-point service made through appointments. Individuals or their attendees interested in participating in a paratransit program can contact a specific agency for information, including the eligibility process and scheduling trips.

While riding public transportation is generally considered safe, certain precautions should be made. For instance, pickpockets are a frequent problem on Paris Metro subways, particularly when people are packed close together. Any passenger using public transit should be aware of their surroundings, especially those traveling solo. Additionally, it's helpful not to carry more than one credit card, large sums of money and place bags, wallets and purses in a safe and secure position. Lastly, a major problem nationwide is smartphone theft onboard public transportation. If using a smartphone is absolutely necessary, it is extremely important to be aware of your surroundings onboard, particularly when a bus pulls over at a bus stop or train arrives at a station.