Around 1:52 p.m., the Twitter account's name was changed to #RIPPRGANG and posted, "This Twitter is now ran [sic] by Henry Blair Strater [sic] from Oswego Illinois, call me at [number redacted]" 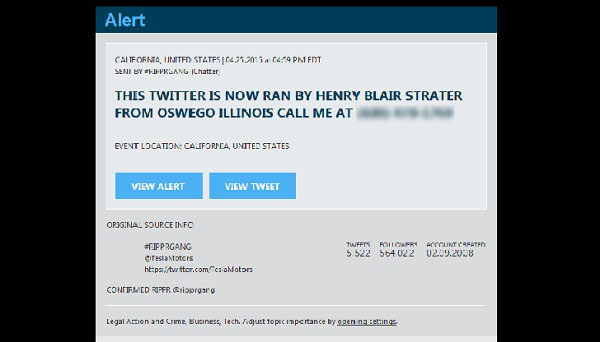 Soon, the account began promising free Teslas for anyone who called. According to TechCrunch, the number belonged to a repair shop in Illinois, that was flooded with calls.

At about the same time the Twitter account was hijacked, Tesla's website was hacked. Visitors were automatically redirected to a website with 'ISIS' in its URL, blaring an expletive-laden ranting video, and a picture of a man resembling Osama Bin Laden behind the wheel of a Tesla. "Hacked by Autismsquad."