We did it! For the second time in three years, the San Francisco Giants have won the World Series. The Giants will be coming home from their sweep in Detroit to a ticker tape parade on Wednesday, October 31st. That's right. Halloween! There couldn't be a more perfect day to celebrate Orange October.

Can't make it to the parade in person? Click here for a live-stream of the San Francisco Giants Victory Parade beginning at 11am on Wednesday.

According to the SFMTA, the parade will begin on Wednesday at 11 a.m. from Market and Steuart streets, travel west on Market Street, turn right onto McAllister Street and proceed west to City Hall. 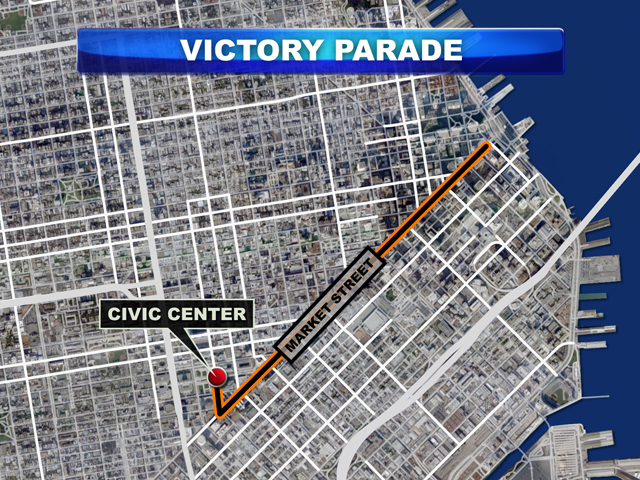 The parade route will be closed to traffic beginning at approximately 9:30 a.m. until the parade clears and the area has been swept.

The following street closures will be in effect starting at 9:30 a.m.:

No traffic or cross traffic will be allowed on Market Street between Steuart Street and Van Ness Avenue after 9:30 a.m. and will re-open at approximately 5 p.m.

SFPD estimate two hours for the duration of the parade.

The Civic Center parking garage will be closed to general parking beginning at 9 a.m., Wednesday until the end of the celebration. Monthly Civic Center parking pass holders will be admitted until 9 a.m. but not allowed out until after the surrounding streets have re-opened.

Fans are strongly encouraged to take public transportation including BART, Caltrain, Golden Gate Transit, SamTrans, and ferries to this event as parking and traffic will be extremely difficult.

BART and Caltrain are adding additional trains. Caltrain tickets machines will have a "Giants Parade" button.

Golden Gate Ferry will add three extra routes in the morning from Sausalito and Larkspur. Afternoon additions will be on an as-needed basis. Bus service will remain the same.

All Muni Metro trains will stop at Civic Center station for the celebration and Parade, as well as at Embarcadero, Montgomery and Powell stations for the parade. The SFMTA will schedule six additional Metro shuttles to supplement the existing Metro service. More than 2-dozen lines will be rerouted.

The additional service will begin at approximately 10 a.m. and continue until the event clears at the Civic Center.

A victory celebration will follow the parade at Civic Center Plaza. Viewing along Market Street close to the Civic Center will give fans better access to the celebration.

Fans will begin to line the parade route early, so plan ahead and give yourself lots of time to 1) get to the Embarcadero or Civic Center Plaza, and 2) secure a great space to see the parade.

Don't forget! If you can't be there in person, we're live-streaming the parade, beginning at 11am on Wednesday.