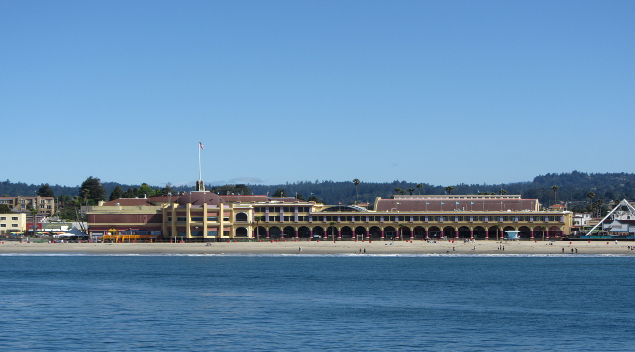 When it comes to the perfect getaway for a three-day weekend, perhaps the finest destination for South Bay residents is "over the hill" to the coastal community of Santa Cruz. Located 45 minutes from the heart of Silicon Valley, this lively city, also known as Surf City, lies along one of the most beautiful spots of the spectacular Monterey Bay. Home to a world-class university and one of the last remaining beachside amusement parks, Santa Cruz is the largest city in Santa Cruz County, offering one of the rare places where visitors can begin a day's hike among ancient redwood trees and finishing right on the beach. The following are five spots in Santa Cruz worth visiting during a three-day weekend.

Easily the top draw in Santa Cruz, the Beach Boardwalk is the oldest surviving beachfront amusement park in California. First opened in 1907, the free admission Beach Boardwalk draws more than three million visitors each year. Among the more than 30 amusement rides are two listed as National Historic Landmarks - the world famous 1924 Giant Dipper wooden roller coaster and the hand-carved 1911 Looff Carousel. Although there are plenty of affordable motels and hotels, two of the best near the Beach Boardwalk are the Dream Inn, Beach Street Inn and Suites and the landmark West Cliff Inn. Another outstanding spot worth noting is Chaminade Resort and Spa, a AAA Four Diamond award-winning hotel four miles from the Boardwalk. The Mystery Spot, a "gravitational anomaly located in the redwoods just outside Santa Cruz," is another interesting site to check out.

Related: A Guide To Rock Climbing Around South Bay

Located just a few miles north of the Santa Cruz Beach Boardwalk, the Santa Cruz Harbor is home to a number of tour operations, popular restaurants and more than 1,000 fishing boats. In addition to the Santa Cruz Wharf, the harbor is a popular spot for fishing trips and boat tours, especially the whale watching excursions that have made Santa Cruz internationally famous in recent times. Among the local businesses operating at the harbor are Chardonnay II Charters, Kayak Connection, O'Neil Yacht Charters and Stagnaro Fishing and Whale Watching. One of most popular restaurants for the locals is the Crow's Nest, voted the Best Restaurant in Santa Cruz from a local newspaper poll and featuring a scenic upstairs lounge, upscale dining and free beach parties during the summer.

Housed within the historic Santa Cruz Lighthouse and on the property of Lighthouse Field State Beach, the Surfing Museum is the first of its kind in the world. Although it's quite small, there's plenty to see, including an impressive surfboard exhibit, with 19th century Hawaiian surfboards and a collection of vintage photos chronicling the history of the sport in Santa Cruz. Hours at the Surfing Museum are limited but West Cliff Drive is truly a must see for any first-time visitor for its tremendous views of Monterey Bay and Steamer Lane, one of the world's most famous surfing spots. Other notable attractions along West Cliff Drive are the historic Darling House bed and breakfast inn, the dog-friendly Mitchell Cove Beach and Natural Bridge State Beach, world renowned for its natural bridge made of mudstone and annual migration of over 100,000 brightly colored monarch butterflies.

Visitors to the Santa Cruz Beach Boardwalk should also visit the Santa Cruz Wharf, just a short walk from the Boardwalk's Coconut Grove. Originally opened during the early days of the city, the wharf is known for its collection of affordable seafood restaurants, fishing and whale watching trips and the always-entertaining California sea lions who casually rest along the pier's wooden pylons. At nearly 2,800 feet long, the Santa Cruz Wharf is the longest pier on the West Coast and recently began its 100th anniversary, with special events running through 2014. Among the notable businesses and restaurants on the wharf are Stagnaro Brothers Seafood, Miramar Restaurant, Gilda's and the Original Stagnaro Fishing Trips and Bay Cruises.

Also known as the "City on the Hill," the University of California, Santa Cruz (UCSC) is a four-year public university and one of the 10 campuses within the University of California system. UCSC has gained international recognition for research and instruction and is ranked second in the world for research influence, sixth in the world for its Economics department and the nation's top ranked Astronomy and Astrophysics department. Sheltered within a peaceful redwood forest amid curious deer who often stray onto the campus, UCSC has been listed as one of the most beautiful campuses in the world from Forbes and Newsweek. Among the major destinations at UCSC are the Arboretum, McHenry Library, Performing Arts Center and two significant off-campus facilities – the world famous Lick Observatory atop San Jose's Mount Hamilton and the Seymour Marine Discovery Center at Long Marine Lab.