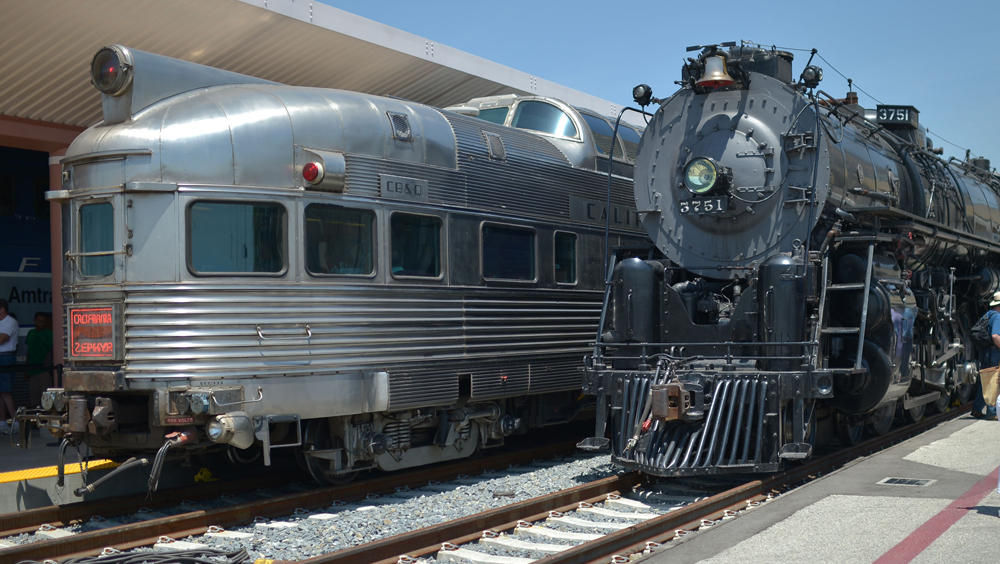 Although motor vehicles and passenger airlines tend to play a larger role in the nation's transportation system, one of the best ways to see America is with rail service. It may take longer, but as gasoline prices continue to remain high and airlines find new ways to add fees, rail service is more affordable than flying and offers unique glimpses of America's vast countryside. All major Amtrak train routes feature dining cars, more leg room in coach, a variety of sleeping cars, two checked-in bags at no cost and a whole lot more room to roam about. The following are five of the best train trips in the United States., some connecting to other historic railroad services far older than automobiles and planes.

Widely regarded as one of the most scenic train trips in North America, the Adirondack operates a daily 10-hour trip between New York City and Montreal. The northbound train originates from Penn Station before passing through the grand Hudson Valley Wine Country and Adirondack Park, the largest park in the contiguous U.S. and the largest National Historic Landmark. Other notable stops along the way include the state capital of Albany, historic city of Saratoga Springs and Westport, where passengers can take a connecting bus to Lake Placid, site of the 1932 and 1980 Winter Olympics and a connecting spot to catch the Adirondack Scenic Railroad.

Related: Must-See US Technology Conventions In 2014

With breathtaking views of the Sierra Nevadas and the incomparable Rocky Mountains, the California Zephyr is unquestionably one of the best train trips in the country. Running daily between Chicago and Emeryville, California, the Amtrak train passes through seven states along the 50-hour, 20-minute journey. In addition to traversing through two of America's largest mountain ranges, notable stops include Sacramento, Salt Lake City, Grand Junction for connections to visit Arches National Park or further south to ride aboard the historic Durango and Silverton Railroad, Denver, Lincoln and Omaha. The California Zephyr also passes through the 6.2-mile Moffat Tunnel and the Continental Divide within the magnificent Colorado Rockies. Westbound passengers arriving in Emeryville can take a connecting bus to San Francisco, about 10 miles away.

Glamorized by the folk song made famous by Arlo Guthrie and years later Willie Nelson, the City of New Orleans is an iconic nightly train service connecting Chicago and New Orleans. Covering more than 900 miles on a 19-hour trip, the train service has been in operation for more than 65 years and at its inception, was the longest daytime train schedule in the country. The City of New Orleans is noted for connecting cities and regions that helped shaped American music history, from early blues and the birthplace of jazz in New Orleans, to the fabled Delta blues within the Mississippi Delta, to the Memphis Sound and the Chicago blues. Other notable stops include Jackson, state capital of Mississippi, Carbondale, Illinois, with connections to St. Louis and Kansas City, and Champaign-Urbana, with connections to Davenport and Indianapolis.

Extending nearly 1,400 miles between Los Angeles and Seattle, the Coast Starlight offers passengers breathtaking vistas along the West Coast. Considered as one of Amtrak's most spectacular of all train routes, the 35-hour trip operates daily, serving 29 stations. Notable stops include Union Station in downtown Los Angeles, San Jose, Oakland, Sacramento, Redding, Eugene, Portland, Tacoma and the King Street Station in downtown Seattle, minutes from CenturyLink Field. Despite the name, the Coast Starlight does not travel entirely along the coast except for a 100-mile stretch between Ventura and Vandenberg Air Force Base near Lompoc. However, the service does afford passengers unforgettable views of the San Francisco Bay Area and towering redwood trees in Shasta National Forest and the Cascade Mountains. The Coast Starlight offers several dining options, including a wine and cheese tasting each afternoon.

Bearing the oldest, continuously used train name in the country, the Sunset Limited is Amtrak's southern-most route. Passing through deserts of the Southwest, along the Mexican border in New Mexico and Texas and the Louisiana bayou country, the service operates three days a week, covering nearly 2,000 miles over the 48-hour trip. Highlights along the way include stops in Palm Springs, Tucson (with connections to Phoenix and Williams for an unforgettable journey on the Grand Canyon Railway), San Antonio, Houston and Lafayette, known as the center of Cajun culture. For a time, the Sunset Limited was the only true transcontinental passenger train service in American history, extending to Orlando. However, service between New Orleans and Orlando was suspended after the tracks were damaged from Hurricane Katrina in 2005.