It was a symbol of the outbreak of lawlessness carried out by mobile bands of looters who moved from East Bay community to community, playing cat-and-mouse with police and wrecking havoc on retail stores, both large and small. Few communities were immune, but San Leandro was among the hardest hit.

On Monday, San Leandro officials instituted a mandatory nightly curfew that wili remain in effect from Monday June 1st through Monday morning, June 8th, unless it is rescinded. The curfew will be in effect each evening from 6:00 pm. through 5:00 a.m.

"All residents are directed to stay home during the designated curfew hours except for emergency responders and health care providers, those seeking urgent medical care, those traveling to and from work, those who are unsheltered and credentialed representatives of the news media," the city's statement said.

KPIX 5 was told around 5 a.m. Monday that some looting was still happening in the East Bay community in the area of the outlet mall.

"Overnight, hundreds of criminals arrived in San Leandro and looted numerous shopping centers throughout the city," the San Leandro police department said in a news release Monday. " Several dozen businesses have been impacted as a result of the lootings...We want to reiterate, the San Leandro Police Department will not tolerate these criminal activities."

There was no immediate word from the San Leandro police or Alameda County Sheriff's Department on the number of people arrested. KPIX 5 helicopter video did record several people being detained.

The Westgate Center located just off Davis St. was the scene of utter devastation as the sun rose on Monday. Windows broken, shelves looted and stolen merchandise laying on the ground dropped and left behind in the looters hasty escape.

The Burlington Coat Factory store was ransacked. Smoke still was drifting out the Walmart. Sprinklers activated by the smoke and fire were spraying water on merchandise. Security alarms could still be heard ringing.

Firefighters said propane tanks located in the Lawn and Garden area of the store caught fire early Monday, igniting a column of fire.

"We had active flames coming out of the roof," said Alameda County Fire Chief Derrick Thomas.

While firefighters would not confirm looters had set the blaze, the smoky interior of the store was filled with toppled shelves, aisles clutter with trashed merchandise and half-filled shopping carts. 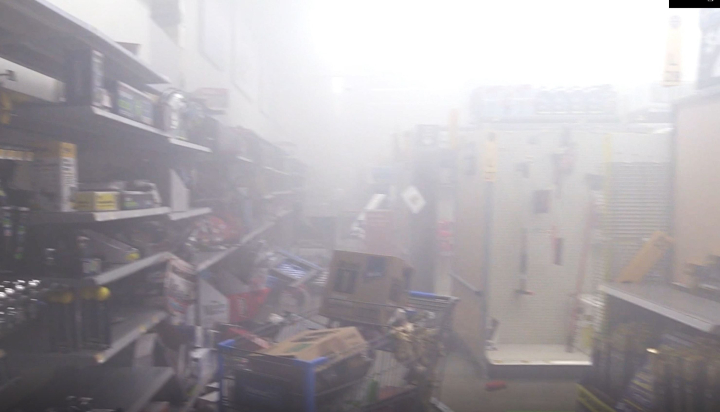 Exasperated San Leandro officials had ordered a curfew in place effective immediately just before 11 p.m. after being confronted with dozens of 911 calls reporting a urge in crime Sunday. Residents were directed to stay at home except for first responders, people seeking medical care and those traveling to and from work.

Earlier, the Alameda County Sheriff's Department confirmed that multiple people were seen going in and out of businesses and looting at the Bay Fair Mall. The sheriff deployed multiple resources to that part of county. Social media reports said that gunfire had erupted -- a photo of a woman with an arm wound posted.

At 6:45 p.m., San Leandro police sent out an alert, warning residents to stay away from Bay Fair, Marina Square and the Westgate Center where looting was underway. Video from Chopper 5 showed looters moving in and out of the Designer Shoe Warehouse at Bay Fair Mall and shuffles breaking out near the parking lot over stolen merchandise.

The unrest led the Alameda County Sheriff's Department to issue an advisory for residents to stay home at around 8:15 p.m..

"All Alameda County residents are advised to stay home due to the civil unrest reported throughout Alameda County and the greater East Bay Area. Unless personal travel is necessary, we are recommending residents stay home due to the high number of police actions," the advisory read. "Currently there are multiple reports of large, mobile groups of rioters and looters traveling throughout the East Bay Area."