The first signs of looting surfaced shortly after 8:15 p.m. when Chopper 5 captured footage of looters hitting a Best Buy store. At one point, a Best Buy van outside that store was lit on fire.

Small groups were strolling through the retail district, choosing targets, smashing windows and then racing inside to rip off merchandise. Helicopter video showed looters with shopping carts full of merchandise and loading the stolen items into vehicles. 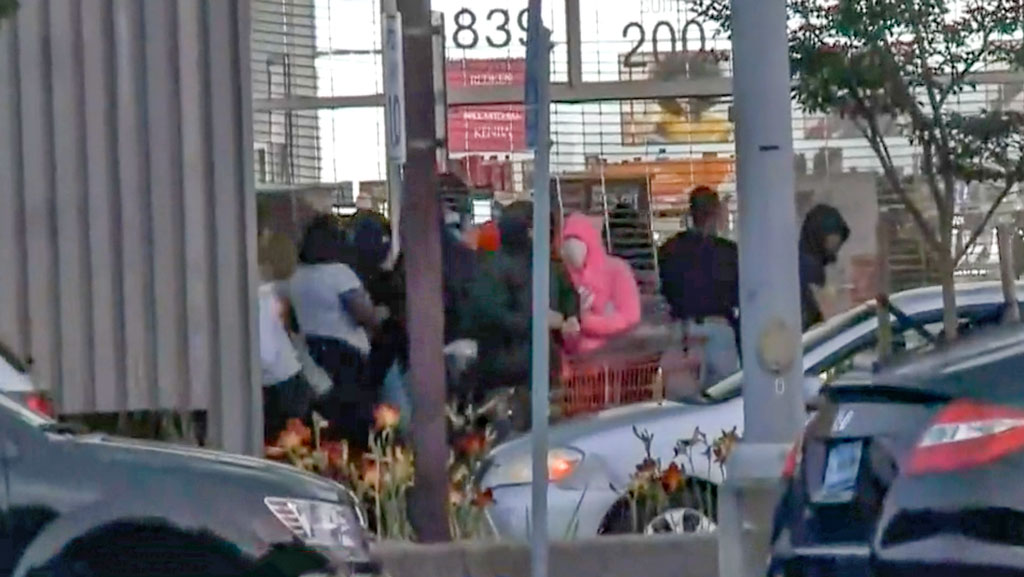 Boxes of alcohol were being carried out of BevMo! Looters were also emptying the Sprint store of cell phones and rushing out of Jos A Bank store with arm fulls of clothing. Most of the stores have been shutdown since mid-March because of the COVID-19 shelter in place.

A Chase Bank branch was also vandalized and a nearby Ross Store was also being targeted with looters exiting laden with merchandise. Looters were also seen running out of the Ashley Furniture store carrying large big screen TVs.

Emeryville police chief Jennifer G. Tejada told KPIX 5 that "several hundred young people are coming in to loot stores...I believe it has nothing to do with the community grief over the killing of George Floyd."

Police had ringed the Bay Street Shopping Center stores nearby to keep the looters out, but they were not confronting those who were already in the process of looting the other stores.

The parking lot at the Best Buy store was littered with boxes and packing materials as some of the looters were unable to fit the large televisions they were stealing into their vehicles without taking them out of the boxes.

Despite an increased police presence that stopped the looting from the Best Buy store, there were still looters taking merchandise from a variety of businesses as of about 11:20 p.m. When officers converged on one area to stop the criminal activity, looters were simply running away and focusing their attention on a different set of shops.

There were no demonstrations nearby protesting the in-custody death of George Floyd in Minneapolis on Saturday evening.

On Friday night, protests in San Jose and Oakland reeled out of control with dozens of people arrested, stores looted, fires set and police officers injured.

Tejada had issued a statement Saturday asking for calm in her community.

"The protests in Oakland last night evolved into acts of violence and vandalism," she said. "We are working with our neighboring agencies to ensure we are ready to respond and protect Emeryville and maintain the safety of our community members. We ask for your help in keeping everyone safe during these challenging times. Please continue to abide by the 'Shelter in Place' order so that you are protected from any potentially harmful activity that may occur this weekend."

"Rest assured, we as sworn officers, are granted the authority to protect our community. We understand that we must do so with a blend of humanity, empathy, and fairness to maintain our public's trust."

Target company officials announced they were shutting down all their Bay Area stores for as much as 14 days because the outbreak of violence related to George Floyd demonstrations. Included in that shutdown was the massive Emeryville store.

On Friday night, a Target store was looted in downtown Oakland. The Target store in Emeryville had its windows boarded up earlier in the day.

"We are heartbroken by the death of George Floyd and the pain it is causing communities across the country," the company said in a release. "At this time, we have made the decision to close a number of our stores. We anticipate most stores will be closed temporarily."

Officials indicated the closings could last for at least 14 days.

"Additionally, team members impacted by store closures will be paid for up to 14 days of scheduled hours during store closures, including COVID-19 premium pay," the release said. "They will also be able to work at other nearby Target locations."