SAN FRANCISCO (CBS SF) -- The FBI has released wanted posters for two men accused of being spies for Saudi Arabia and accessing Twitter accounts of the kingdom's critics.

Ali Alzabarah, 35, and Ahmed Almutairi, 30, are Saudi citizens and currently believed to be in Saudi Arabia. A third man, Ahmad Abouammo, 41, a U.S. citizen accused of working with the others, was arrested in Seattle on Wednesday.

Abouammo and Alzabarah are former Twitter employees who are accused of using their employment to access this information on Saudi government critics in exchange for money and other benefits, according to the FBI.

Almutairi, aka Ahmed Aljbreen, is alleged to have acted as the point person to facilitate communications between the Saudi government and the other defendants.

According to complaint, all three have been charged with acting "in the United States as an agent for a foreign government."

"Acting in the United States under the direction and control of Saudi officials, the defendants are alleged to have obtained private, identifying information about users of Twitter who were critical of the Saudi government," said Assistant Attorney General for National Security John C. Demers in a press release.

"Aside from being criminal, their conduct was contrary to the free speech principles on which this country was founded," said Demers. 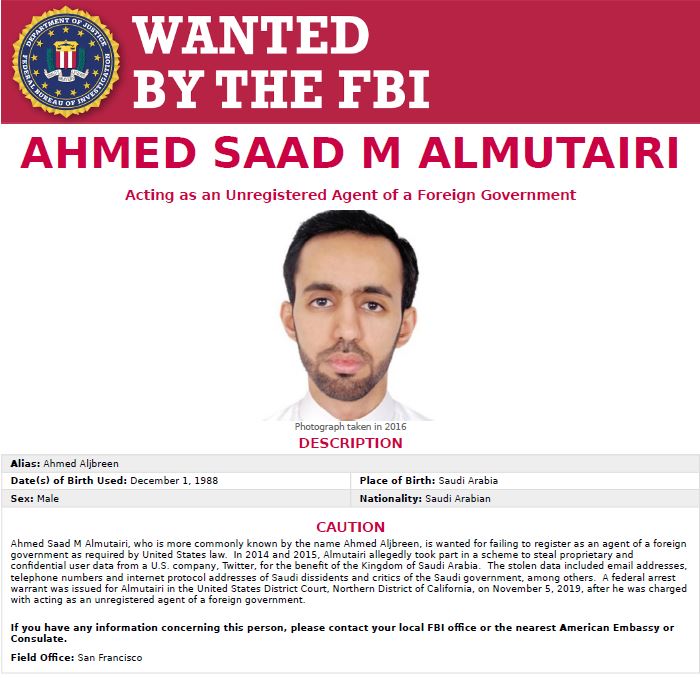 The complaint alleges that between November of 2014 and May of 2015, Almutairi and Saudi officials convinced Abouammo and Alzabarah to use their employee credentials to gain unauthorized access to private information about the individual Twitter users such as email addresses, phone numbers, IP addresses.

The Washington Post reported one of the accounts targeted belonged to a dissident who later became close to Jamal Khashoggi, the Saudi critic and Post columnist who was murdered last year.

When Twitter management confronted Alzabarah about the unauthorized access, he sought assistance from Almutairi and others to flee the U.S. the next day and submitted his resignation from Twitter by email while en route, according to the complaint. 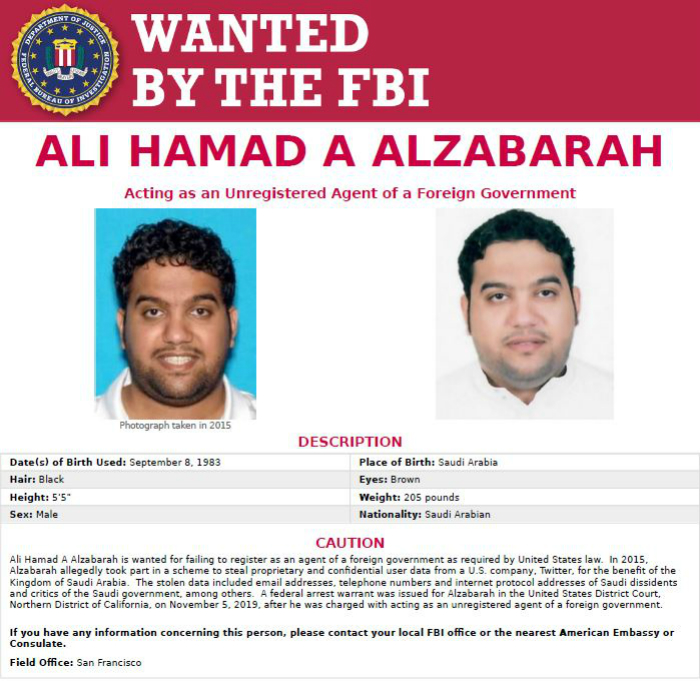 Investigators say Abouammo was compensated for his illicit conduct with cash and a luxury watch.

The complaint says Abouammo lied to FBI agents in October 2018 and provided them with a falsified invoice when confronted about his alleged activities on behalf of Saudi officials in an effort to obstruct the investigation.

Abouammo made his initial court appearance in Seattle Wednesday. In addition to his Twitter employment, Abouammo's LinkedIn page describes him as a "communication and marketing leader" and lists his current jobs as a digital consultant with Cyrcl LLC and as co-founder of a "new startup that will redefine social." Washington state records show that Cyrcl was dissolved in 2017.

Amazon and Middle East Broadcasting Networks confirmed that Abouammo had also worked for those companies but said the jobs he listed on LinkedIn did not match their employment records.

Abouammo's website says he is finishing a master's degree in management from Harvard University. The university did not immediately respond to an emailed request for comment.

A senior Saudi official in Washington declined detailed comment on the spying allegations. But the official said Thursday that "we expect all our citizens to abide by the laws of the countries in which they live."

If convicted, the three face maximum statutory sentence of 10 years in prison and a $250,000 fine for acting as an agent of a foreign government without notification to the Attorney General.

In addition, Abouammo faces an additional 20 years in prison and a $250,000 fine for destroying, altering, or falsifying records