REDDING (CBS SF) -- A growing army of firefighters battled the advancing flames of the Fawn Fire northwest of Redding on Friday, making some progress and preventing any additional destruction as the fire grew closed on 7,000 acres.

The successful defense of many structures came 24 hours after homes burned and cherished memories were turned to ash in what authorities believe is an intentionally set blaze.

Cal Fire provided an update on the fire Friday evening, saying it had grown to 6,820 acres in size. The fire remained at 10% percent containment.

Engine Captain Chris Harvey with the Sacramento City Fire Department who was serving as public information officer for Cal Fire on the incident said that a total of 169 engines, 45 dozers, 35 hand crews and 29 water tenders were currently assigned to the Fawn Fire for a total of 1,663 personnel.

Shane Lauderdale with Cal Fire Incident Management later added that crews had made protection of threatened homes a priority on Thursday, "saving literally hundreds of structures."

While thousands of structures were still under threat from the fire -- particularly in the area south of Fawndale on the southern end of the fire -- Lauderdale said they were in "a much better place" thanks to efforts by crews on Thursday.

"One of our number one priorities for today was ensuring that mop up and patrol was done around all of those structures. so that as we went into today and this evening without further structures lost," said Lauderdale.

While an official damage estimate had not been made, Lauderdale said there had been no reports on Friday of additional structures being burned.

New mandatory evacuation orders were issued by the Shasta County Sheriff at 11:30 a.m. Friday that covered all roads east of Interstate 5 and north of Old Oregon Trail covering the area north to Shasta Lake.

The Shasta County Sheriff earlier issued a warning to those who refused to obey evacuation orders to stay in their homes late Friday morning, saying if they are seen in areas that have been evacuated they could be removed by authorities.

"Now we're dealing with a south wind that kind of picked up this afternoon, which is why we had a little sloppy over that we're dealing with right now," explained Shasta County Fire Marshal Jimmy Zanotelli. "Trying to hit it with tankers, the ground support, the helicopters."

Not far away from where the fire was burning, those who had evacuated their homes stood and watched the helicopters pull water from Lake Shasta, itself a jarring depiction of California's drought.

"It is," said one woman gawking at the scene. "The lake is drying up. We're in a major drought here."

Harold Jones owns the Sugarloaf Cottages up I-5 at Lakehead, where drought has delivered a crushing blow, for the second time in just six years.

The Fawn Fire is the latest destructive fire to send Californians fleeing this year. Fires have burned more than 3,600 square miles so far in 2021, destroying more than 3,200 homes, commercial properties and other structures.

Both fires and drought have become a consistent problem, Jones explained.

"It just seems like, for the last couple years, it has always been something. If it's not the pandemic, it's the fires, it's a drought," Jones said. "We are pretty resilient up here. Whatever is thrown at us, we make the best of it and keep surviving."

Cal Fire officials said Thursday afternoon that they will be seeking "arson to wildland" charges against Alexandra Souverneva, a 30-year-old Palo Alto resident.

Employees of the JF Shay and Mountain Quarries -- located near where the fire started on Wednesday -- told investigators they saw a white female "trespassing on the property and acting irrationally."

On Wednesday evening, firefighters engaged in battling the blaze saw a woman -- later identified as Souverneva -- walk out of the brush and ask for medical help.

During an interview with Cal Fire and law enforcement, officers came to believe Souverneva was responsible for setting the fire. She was arrested and booked into the Shasta County Jail.

The fire was burning in steep, rugged terrain as windy conditions caused the fire to spot in many areas. As the blaze jumped the control lines, it forced at least 4,000 residents to flee their homes. More than 2,000 structures were threatened.

At least 25 structures had burned by late Thursday including several homes.

Deb Webb was among those who lost their home. On Thursday evening, she stood in what was once her front yard, emotionally devastated by what she was seeing.

"I was told they (local officials) thought it was gone, but I didn't know," she said with tears streaking down her face. "I see my life gone. Mementos of everything gone. My mother whose gone, I don't have her ashes anymore, they were in the house. My brother's gone, his ashes were in the house."

Deb Webb's return to her burned down home

The flames continued to rage overnight, taking an even greater toll. . 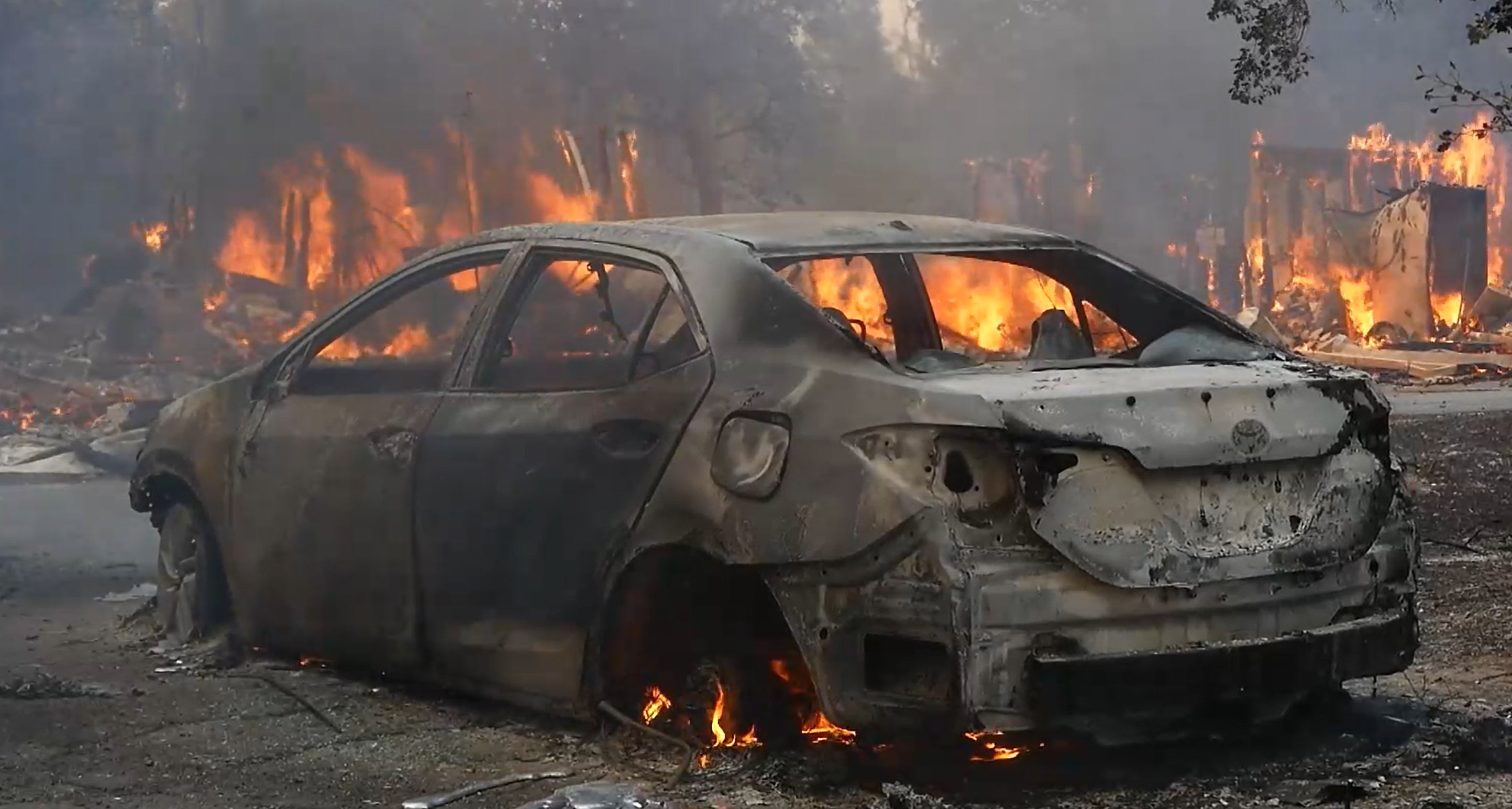 In addition, an evacuation warning was issued for areas north of SR-299 and east of I-5. Redding police said Code Red notifications were being issued in that area. Residents who choose to evacuate were advised to head towards SR299.

A shelter was set up at the First Church of the Nazarene at 2255 Bechelli Lane in Redding. A temporary evacuation center at the Shasta College parking lot in Redding was closed because the area was also evacuated.

Wilson Walker contributed to this story.